Will human brain or head transplants ever become a reality?

Although some neurosurgeons are gung ho about the possibility, many ethical questions first need to be addressed 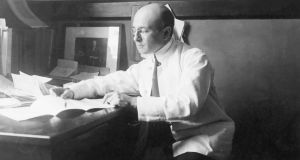 Noting that the ethics of brain transplantation had been raised in Any Questions on BBC Radio 1, Newcombe sneered that it was “ridiculous and rather irresponsible for anyone to promote discussion of the ethics of a brain transplant . . . ” as the possibility was “an enduring figment of the imagination”.

The extent to which brain – and even head – transplantation is “an enduring figment of the imagination” may be inferred from the fact that technical procedures and associated ethics are now discussed in the pages of respected medical journals. For example, in 2016, the European Journal of Neurosurgery described, The history of head transplantation: a review, and this year the journal Philosophy, Ethics and Humanities in Medicine considered the ethical and legal issues surrounding head transplantation.

However, a human brain/head transplant to a live recipient has not occurred.

An early advance was made by Dr Alexis Carrel (1873-1944), a Frenchman whose pioneering development of vascular anastomosis – reconnecting severed blood vessels – was recognised in 1912 when he shared a Nobel Prize with American physiologist Dr Charles Guthrie for their work on “Suture of Blood Vessels and Transplantation of Organs”. Carrel’s dedication to the acquisition of sewing skills included spells in Lyon’s silk district, and it was claimed he could sew 500 tiny stitches in a single piece of cigarette paper.

In 1908, Carrel and Guthrie performed the first dog head transplant, grafting the head of one dog on to the upper body of another. The two-headed animal lasted only a few hours before it was euthanised. And in 1954, the Soviet surgeon Dr Vladimir Demikhov undertook a series of canine head transplants, grafting second heads onto live recipients, with the transplanted heads able to move, see and drink water. The longest-surviving dog lasted 29 days, but most died within three days, due mainly to the recipient’s immune system rejecting the grafted head. The advent of immunosuppressive drugs in the 1960s and ’70s allowed the problem of rejection to be addressed.

Transplanting a head entails severing the spinal cord, constituting a major challenge, but an encouraging development came with the application of so-called “fusogens” – polymers like polyethylene glycol (PEG) – that can fuse cell membranes together. For example, in 2004 when paraplegic dogs were treated with PEG three days after their spinal cord injuries, half of them were able to walk within a fortnight.

Although techniques using transplanted brain cells or transplanted neural stem cells have been developed to try and recover functionality in neurodegenerative diseases such as Parkinson’s, this is a far cry from going the whole cerebral hog, as it were. Yet, 50 years after Newcombe’s dismissal of brain transplantation, two neurosurgeons – Xiaoping Ren from China, and Italian Sergio Canavero – are now writing with untrammelled brio about their head transplant protocol, the so-called Head Anastomosis Venture, bearing the celestial acronym HEAVEN.

For example, last year in the journal American Journal of Bioethics Neuroscience, they asserted that “it should be abundantly clear that all criticisms raised are groundless as to the feasibility of the project. Further, the risks are well within the range of other transplants. The possibility of reconnecting the spinal cord is new but, as shown, grounded in experiment and a sound underlying rationale. Why then the criticisms from the very beginning?”

With such reckless adventurism confirming that medical technology lacks a capacity for reflection, the importance of first surveying the ethical landscape before launching into projects such as these cannot be overstated.

Ethicist Prof Paul Root Wolpe, writing in the same journal as Ren and Canavero not only demolishes many of the technical arguments that Ren and Canavero promote, but he reminds them – and, more importantly, us – that ethical considerations are not confined to the ivory towers of academe, but arise in society, where the rest of us live. For example, what would happen, asks Wolpe, if his head were transplanted on to another body: “We(!) would have his fingerprints, not mine. Any offspring would be genetically his, not mine . . . ” et cetera.

And this doesn’t address the question of body/mind and identity, one perhaps best summed up in the work of philosopher John Locke (1632-1704), who gave the example of a prince and a cobbler in this elegant thought experiment: “For should the soul of a prince, carrying with it the consciousness of the prince’s past life, enter and inform the body of a cobbler, as soon as deserted by his own soul, everyone sees he would be the same person with the prince, accountable only for the prince’s actions: but who would say it was the same man? The body too goes to making the man, and would, I guess, to everybody determine the man in this case, wherein the soul, with all its princely thoughts about it, would not make another man: but he would be the same cobbler to everyone besides himself.”

Until these, and other ethical dilemmas associated with brain transplantation can be debated, never mind resolved, it seems appropriate to recall Kipling:

“If you can keep your head when all about you