From adult swaddling to orgasmic meditation, there are some truly crazy alternative wellness programmes available 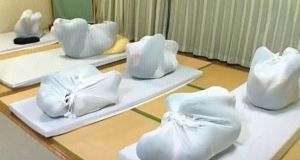 People will go a long way in the quest for spiritual enlightenment, wellness or simply a better body.

And while few can dispute the efficacy of a traditional workout or spa treatment, there is always a seasonal wave of wellness trends that are catnip to those who prefer novelty. Yet, in an increasingly overcrowded market, it’s easy for new wellness developments to get lost in the shuffle.

Originating in Japan in the 1980s, Shinrin-yoku – very simply, being in the forest, no water required – is big noise in Japanese preventative healthcare. Last year, it was scientifically proven to reduce stress hormone production and boost the immune system.

And in a time when we need to unplug more than ever, Shinrin-yoku is already being practised at Victor’s Way in Roundwood, Co Wicklow, and Barnaslingan Wood, Dublin.

Would it work in Ireland? It’s safe to say we’ve done ‘being in the forest’ for some time now.

Adult swaddling might sound like a fringe sexual peccadillo, but in Tokyo, the fad is fast gaining traction. Clients get wrapped in head to toe in a white bag, placed on cushions and are rocked gentle from side to side.

The practice, called Otonamaki in Japan, was devised by a Kyoto midwife as a way to treat shoulder and hip pain after childbirth. Think jumping back into the womb for a bit of ‘me’ time.

Would it work in Ireland? Possibly. Might be good for the odd man-child.

In Shoreditch, London, Get A Drip offers IV drips and booster shots for anyone feeling a little under the weather. The basic hydration package starts at £39.99 (€45); after that there are add-ons that will tackle nausea, headache and acidity. For an extra £20 (€22), the packages become more specialised, from the Detox Drip and the Sports Drip to the Party Drip.

The latter, for instance, is said to restore the body’s chemical balance with vitamins and minerals.

Would it work in Ireland? A Party Drip might prove popular.

Reckon that meditation is a time for blessed quiet? Think again. Dynamic meditation involves lots of yelling and jumping around. Guru Osho Rejneesh believed cathartic methods were necessary as well as reflection (since it was difficult for modern people to just sit and enter meditation) and formed a sort of Dynamic Meditation prototype in the 1970s.

Now, you can find no shortage of Spotify playlists that can help you jump around and shout while meditating, jumpstarting a connection with repressed emotions.

Would it work in Ireland? Yes. Who doesn’t like a bit of shouty catharsis?

For Ireland, a nation raised on meat and spuds, crickets and tarantulas might be a touch too close to on-screen Bushtucker Trials. But it’s something we may well need to get used to: it is estimated there will be between nine and 10 billion of us living on earth by the year 2050, and insects could be the ultimate sustainable food source as they have a high rate of reproduction, are fast growing, require little water or food and produce low CO2 emissions.

In fact, Wicklow-based insect farmer Tara Elliott is planning to launch the first product in her EddieBug range this year: a high-protein bar made from cricket flour.

Would it work in Ireland? Time will tell. Crickets and beer are already a regular bar snack in Asia.

This is not a typo: if you’ve done yoga and mindfulness but need something extra, this is about as ‘extra’ as you’ll get. Straight from New York (where else) comes Orgasmic Meditation, or OMing. OneTaste New York offers a vaginal massage to clients – ostensibly to help them focus on being ‘in the moment’.

The treatment can be done with a pal or partner, or you can simply enlist a stranger to help. According to OM experts, the service is directed at those who aren’t necessarily comfortable in receiving pleasure.

Would it work in Ireland? Possibly, but only after a couple of drinks. Not sure we’re that open-minded just yet.

Who wants all the benefits of wine without a hangover? Using wine for medicinal purposes isn’t new but at the Marques de Riscal Vinotherapie spa hotel in Spain, the raw ingredients of wine are kneaded into the skin, and will reportedly create feelings of intense relaxation.

Vinotherapy is said to work wonders on your health, as long as you don’t actually drink the stuff.

Would it work in Ireland? That last caveat might not go down well.

It takes a lot to make a class stand out from the gelatinous glut of yoga classes already on offer, but Germany’s BierYoga has managed to blend two semi-religious practices in one to create a real talking point.

Founder and yoji Jhula reportedly saw Beer Yoga first done at the Burning Man festival in Nevada and decided to bring it to the masses in Berlin. Perhaps not surprisingly, it’s become airborne in recent months.

Would it work in Ireland? Does the Pope wear a cossack?

Given the classes’ popularity, it’s only a matter of time before this goes countrywide.

Would it work in Ireland? A high-energy workout for youngsters and a healthy dash of nostalgia for oldies? Absolutely.

London’s Gymbox chain are innovators when it comes to tempting people back into the gym environment.

Previously, they have run stiletto workouts and the dubiously titled ‘chav fighting’ (pitched somewhere between self-defence and a hardcore cardio workout).

And now, they offer twerking classes with more than a nod to the popular dance. Twerking can help tone your quads, obliques, glutes and more – basically the same muscle groups as squatting.

Would it work in Ireland? Very likely.