Tell me about it: Why has my husband chosen to stay in his current job with the arduous trips abroad? 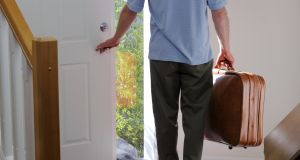 Is my husband hiding something from me about his business trips? Photograph: iStock

Question: My husband and I have been married for 21 years. We have two teenagers who live at home, who are both due to start exams. We also have one daughter who has some mental health difficulties. She does not live at home but she does require a lot of support. I also care for an elderly parent.

My husband is an executive with a large international company and he travels abroad at least once a month. I am a stay-at-home mum and I am finding that I am the one with the more difficult role. Two months ago, my husband was offered the role as the most senior executive in his company in Ireland. This would mean he would get a pay rise but, most importantly, he would be based in Ireland with only occasional travel abroad about once or twice a year. We had always hoped that he would step into this role when his former boss retired.

To my shock, he refused the position and has now decided to remain in his current job and continue with his long and arduous trips abroad and away from his family. He has always spoken about how much he despised being away from us, so this decision came completely out of the blue. His justification for this choice is baseless and simply weak.

My daughter joked that Dad might have a secret family abroad. I know that this is ridiculous, but the thought has lingered in my head that there may be an attraction to his work that he has not previously spoken about. He has talked a lot over the years about a female colleague who accompanies him on most of his trips. He hasn’t mentioned her in the past six months, nor has he mentioned her recent separation and this has made me very suspicious, because he loves to gossip.

I have checked her social media and there are a number of pictures of them together on nights out that he has never mentioned.

Answer: This is a crisis in your relationship and, from your letter, it sounds as though you have held the larger share of raising the family (including heavy life-long caring duties) while your husband provided financially but was largely absent. The incongruity between his words and actions (saying he wants to be at home and refusing this possibility) adds to your sense of disquiet and this needs to be addressed. When someone says one thing and does another, we know it is a lie of some sort.

There is often fear behind lies: we do not tell the truth for fear of losing something or from fear of being thought less of. You know that you are not getting the full truth from your husband as you would not be questioning and suspicious if you really understood his reason for refusing the promotion. This is a huge breach in your relationship and one that will become wider if not addressed.

However, you may also be full of fear: fear of loss of family, relationship, financial stability and consequences for your dependents. This fear might stop you from engaging in the contentious issue of checking his loyalty and fidelity but it can also have the very negative effect on you of shattering your self-confidence and increasing your self-doubt.

No doubt you have asked many questions and have received stories in response that do not match your reality and so a bigger situation needs to be created and you are the person who needs to instigate this. It may well be that your husband is innocent of infidelity but at the very least you know that he is hiding aspects of his life from you.

The first step is to make the conversation serious but you must prepare yourself to seek the truth. If you want reassurance that everything is okay, you are likely to get it, so be brave and determined that you will have honesty. It is also possible that your husband is fearful that he is not up to the promotion and so is avoiding and blocking as a result. If this is the case, he will need your support and encouragement. Communication and engagement are crucial and you have to be persistent in this.

You also need to be supported and it is important that you surround yourself with people who are calm and consistent but who allow you to make your own decisions. Your teenage children should be exempt from the details as they have a right to their own relationship with their father and this is sacrosanct.

Should you discover that there has been an affair, do not rush to action but ensure that you make decisions in relation to your life when you are in a grounded and healthy place.

If this turns out to be the situation, you could benefit from some professional support as you navigate the turbulent and traumatic time that comes in the aftermath of such an enormous breach in your marriage.

Covid-19 infection rate in hospitals ‘out of control’