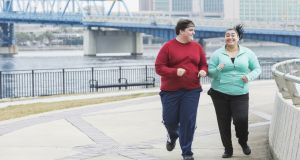 ‘If you’re moving while fat, the threat of being body-shamed is always there – and whether it is malicious or not, it has repercussions.’ Photograph: iStock

“Well, what is an athlete? It’s somebody that gets up, and does what they need to do. Just because they don’t look or act like an athlete doesn’t mean they should get singled out.”

Elizabeth Ayres has been fielding lots of questions since her Facebook post about her experience at the London Marathon went viral. An official pacer for the event two weeks ago, Ayres was running with the slower “blue start” wave at the back when she saw exactly how people can be treated when they don’t fit the stereotype of a marathon runner. Ayres saw water stations packed up early, official sweepers pushing the runners forward and even contractors yelling insults.

“Run, fat boy, run,” is one that Ayres remembers – and the judgment hasn’t stopped since, she says. “Some of the comments that are coming out online are the same ones we heard out there on the course that day. No wonder people go out and run at night, when there are fewer people to see them. Why knock somebody down who’s actually trying?”

It may make no sense, but it is nothing new if you have tried exercising in public as a plus-size person. When you’re fat, even just walking outside can be seen as an invitation for conflict. “I’ve been shouted at, had things thrown at me, had the finish-line packed up before I got to the end,” says Julie Creffield, a plus-size athlete and founder of the website The Fat Girls’ Guide To Running.

“I ride my bike every day and a man on the pavement shouted at me that he hoped I was on that thing more often, because I ‘needed it’,” says the broadcaster Jennie Cook.

“One day, when I was feeling happy, a car full of young men drove past me and threw liquid at me,” wrote the blogger and plus-size runner Stephen Morrison. “I only hope it was water.”

In gathering people’s personal stories of fat-shaming, throwing drinks seems to be a popular tactic. Once when I was walking in town, I had an empty can of Red Bull thrown at me from a passing van. It sailed past my head to bounce off a window. The bellow of “fat bitch” that followed hit the target, though. (I took a picture of their licence plate number and grinned, sparking a 45-minute shouting match.)

“You never just get called a bitch, it’s always ‘fat bitch’.” Latoya Shauntay Snell knows how it works. The US-based runner, chef and activist has set herself the challenge of running 10 marathons this year; when we speak she has just arrived in Providence, Rhode Island, for a race the next day. She has experienced body-shaming in races, at gyms, on the streets – just about everywhere. “When it comes to being plus-size, it’s always that descriptor that’s thrown in there to remind you of who you are, what’s your place, and why you’re not equal. And that sucks.”

There are moments, says Snell, when she reaches a level of comfort on her run, “where I’m on this natural high” – and she is interrupted by someone’s unwelcome judgment. “And then it’s like: ‘Holy crap, here I am again.’ You can’t prepare for that. But you know what? I’m moving. I stand my ground. I don’t appreciate anyone – whether I know them or not – making judgment on me and my ability to do the things that I do.”

Fat-shaming is not always malicious. But even if well-intentioned, it can still be unwelcome or unhelpful, especially for those who have only recently set out on their fitness journey. My immediate family has struggled with weight issues for as long I can remember. The gamut runs from obesity to anorexia – which issue each of us happens to be working through depends on the year or month.

A few years ago, my brother and I were in an obesity phase and at the gym, trying to get out of it, when we were approached by an irritant who will be familiar to anyone who is fat. “I was on an exercise bike, headphones on and concentrating,” David remembers of this particular instance – one of many. “I’d finally got comfortable that I wasn’t being judged for being there. But I felt a tap on my shoulder, and turned to see a woman saying something to me. I expected: ‘Are you on that machine much longer?’ or: ‘You’ve dropped your key.’ But when I took my headphones out, it was something along the lines of: ‘I think it’s wonderful that someone like you is here doing what you’re doing.’ I was confused. I was there for the same reason she was, so could only muster a quick, ‘uh, thanks, I guess. It’s good that you’re here to exercise, too’.”

The same woman later tracked me down in the changing rooms to say something similar. As soon as I registered her charitable facial expression, I thought: ‘I really hope you didn’t speak to my brother’. Aloud, I answered with a variation on: “Okay, well . . . cool.”

If you’re moving while fat, the threat of being body-shamed is always there – and whether it is malicious or not, it has repercussions. “Study after study has shown that body-shaming and weight stigma have negative consequences for weight-loss, health behaviours and overall physical health,” says Rebecca Pearl, an assistant professor of psychiatry at the University of Pennsylvania; her 2014 study on weight-bias experiences and internalisation found a clear correlation between weight stigma and exercise behaviour. “When people who are overweight and obese experience weight bias, they are more likely to report motivation to avoid exercising, especially in public settings.”

A connection between shaming and motivation was also found by Sarah Jackson, a senior research associate at University College London. “Weight discrimination – fat-shaming – is often justified on the basis that it will encourage people to lose weight. However, a substantial and growing body of evidence suggests the opposite: people who encounter weight discrimination tend to be more likely to gain weight over time.”

That appears to be down to multiple factors, she says, including the body’s physiological stress response increasing appetite for comfort foods that are high in fat and sugar, as well as a desire to avoid further physical activity, contributing to weight gain. “But even if fat-shaming did promote weight loss, knowingly stigmatising and discriminating against people is unethical and should be actively discouraged,” says Jackson. It is difficult to determine exactly why others feel moved to yell, throw things or patronise fat people they see in public, but until they find compassion – or even just apathy – it’s something we have to work through. The people who told me about their experiences of fat-shaming described working out at home to avoid being yelled at by strangers, or jogging in public only after dark.

Dr Arghya Sarkhel, a consultant psychiatrist at the Living Mind clinic in London, urges those who have experienced body-shaming to push through to exercise, socialise and live their lives, “despite any shame or guilt you may be feeling. Make an effort on a small scale to prove that not everyone sees your size as a negative image. ”

“In general, the support has been amazing,” is how Ayres sums up the reaction to her experience at the London Marathon, noting that the media attention seems to have boosted the fundraising of those who ran with her. “I mean, you always expect the trolls who are going to chip in with rubbish.”

Snell is similarly unfazed ahead of this next marathon on her challenge. “Even at this race tomorrow, there’s a possibility I might be one of the last runners coming in. I think it takes a lot more grit to know that you’re going to be one of the last runners out there, watching things get torn down. It’s a mental challenge for your grit, your passion and your heart – you just have to keep going.” – Guardian