Tuberculosis: reaching out to ‘the missing millions’

With four million cases of TB going undiagnosed around the world each year, healthcare professionals are committed to improving detection rates 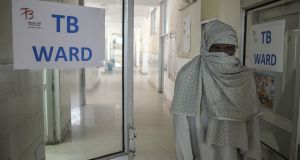 More than 95 per cent of TB cases are in developing countries including India, China, Russia, Indonesia and South Africa. Photograph: Shammi Mehra/AFP/Getty Images

“We need to raise awareness around the world of ‘the missing millions’ – four million people who remain undiagnosed with TB each year,” says Cat Oyler.

Oyler,  vice-president of global public health at pharma giant Johnson & Johnson,  will be at Dublin’s Bord Gáis Energy Theatre this week to speak at the tech, science, design and arts festival, Inspirefest. She is hoping to encourage techie start-ups and innovators to contribute both funds and ideas to the pharma company’s 10-year initiative to help end tuberculosis.

Johnson & Johnson says it is committed to working with partners to improve detection of undiagnosed cases of TB (tuberculosis), to broaden access to its medicine bedaquiline, which is used in combination with other drugs to treat multidrug-resistant TB, and to research and develop next-generation TB treatments for children and adults.

And while this all sounds very impressive, tackling TB in the developing world is very difficult, not least because the stigma of TB – and side-effects of older medicines – can deter people from seeking diagnosis and treatment. Some commonly used drugs to treat TB cause deafness, liver and kidney damage and psychosis.

Training healthcare professionals in the latest diagnostics and treatment is seen to be the key to tackling the epidemic. Newer medicines must be taken from six to 24 months [the longer period is for drug-resistant TB] to completely cure the disease. Equipment to detect hearing-loss, ECG machines to check drug-treatment regimes and nutritional advice is also provided to patients.

Oyler has big-pharma speak off to a tee.

“We need to ensure the replenishment of the Global Fund [the 21st-century partnership between governments, civil society, the private sector and patients to end Aids, TB and malaria]. We need political commitment. We need capacity and capability building and training in diagnostics and treatments,” says Oyler.

She spends a lot of her time travelling to developing countries, including India, China and Russia, to visit TB clinics, meet healthcare workers and patients while promoting new diagnostic and treatment regimes. “We hear stories of people with persistent coughs who will reach out to five to eight healthcare workers – including traditional healers – to get their cough seen to before seeing a physician trained in diagnostics,” she says.

– Tuberculosis (TB) is a curable infectious disease caused by bacteria that usually affects the lungs. TB is spread from person to person through the air when an infected person coughs, sneezes or spits. It can be prevented with early detection, good hygiene (and isolation during the contagious phase) measures and full compliance with drug treatment.

– About a quarter of the world’s population has latent TB, which means they have been infected by the TB bacteria but aren’t ill or can’t transmit the disease. In 2017, 10 million people (one million of whom were children) fell ill with TB and 1.6 million (including 230,000 children) died from the disease. The disease mainly affects adults of working age. Between, 2000-2017, an estimated 54 million lives were saved through TB diagnosis and treatment.

– TB used to be more common in Ireland, with nearly 7,000 cases a year in the 1950s. The number of cases each year in Ireland now is about 300. Doctors are obliged to notify each case of TB to local departments of public health in the HSE. The childhood vaccine BCG protects against some forms of childhood TB (particularly TB meningitis).

– The symptoms of active TB are cough, fever, night sweats or weight-loss. TB mostly affects adults but more than 95 per cent of the cases are in developing countries including India, China, Russia, Indonesia and South Africa. People with chronic health conditions, weak immune systems and those who are HIV-positive are more susceptible to becoming ill with TB.

– Multidrug-resistant TB is a public health crisis in the developing world and has been defined as a health security threat by the World Health Organisation. Ending the TB epidemic by 2030 is among the health targets of the Sustainable Development Goals.