Lego, comedy and science: how to choose the right summer camp

So much choice – but should you cater to your child’s interests or challenge them? 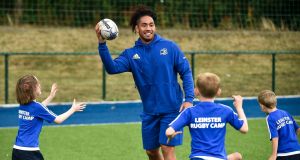 All summer long, The Irish Times will offer tips, advice and information for parents on how to help their children thrive during the holiday months. Read all about it on irishtimes.com/summeroffamily

The long, lazy days of summer are on the way and, much as parents love their little rascals, it can be hard to find ways to contain their boundless energy.

Irish schools have some of the most generous summer holidays in Europe, which makes the task more challenging still, for working and stay-at-home parents alike.

Thankfully, there has never been such a diverse range of summer camps on offer, from animation to arts and craft, stand-up comedy to surfing, science workshops to soccer. All offer a chance to broaden your child’s social circles, foster a sense of independence and hone new skills.

When it comes to choosing the right summer camp for your child, the common-sense advice is to choose an activity they love

But should you immediately jump at a camp that meets their existing interests or obsessions, or broaden their horizons with something a bit different?

How much should you be prepared to spend – or can you get discounts with siblings and friends?

Or do you risk over-scheduling your child’s summer by cramming in summer camp after summer camp?

And perhaps the biggest challenge of all: how do you convince your boisterous six-year-old or obstreperous adolescent that they’ll enjoy being packed off to camp for a few days?

What can I expect?
If you’re looking around to see what’s available, try websites such as the Irish Times 2019 summer camps guide to see what’s in your neighbourhood.

Most camps take place in July and August and are normally a week long. They also vary in length and tend to start in the mornings (9.30 or 10) and finish up after lunchtime, though some last a full day.

Ages vary depending on the type of activity, but typically range from about four up to 15 years or older,

Some experts, though, suggest mixing up a bit of what they like and something a little out of their comfort zone.

“We can often label children too easily based on their perceived strengths and assume a sporty kid won’t enjoy art,” says Dr Colman Noctor, a child and adolescent psychotherapist. “It’s not about forcing a bookish child to do a sport camp, but maybe there’s a multiactivity option.”

Starting off the summer with a familiar activity your child will enjoy can be a good start – especially if their friends are going there too. Then, it can be easier to expose them to new experiences later in the summer.

A way to save is to avail of sibling discounts. Most camps typically offer a 10 per cent discount for a second or third child

Siobhán O’Neill White of parenting website Mam.ie recalls starting her 12 year old off with a GAA camp last year, before convincing him to do a cookery camp later in the summer.

“He moaned so much about it when I suggested it. He didn’t want to do it. When I picked him up after the first day, he was delighted. He’d made a bouillabaisse, he was talking about garlic and how to do marinades. He loved it,” she says.

How much is too much?
With children at primary school facing into a lengthy nine-week layoff, it can be tempting to try to cram their time with a succession of different camps all summer.

While camps can be great way for children to make new friends and learn new skills, Dr Colman Noctor cautions against too much structured activity.

“I worry that children have very little down time and we risk spoon-feeding them too many adult-led activities,” he says. “It can stunt creativity and inventiveness, as everything is expected to be scheduled and planned.”

That said, he’s aware that working parents don’t have this luxury and trying to keep kids occupied can be easier said than done

How much can you expect to pay?
You can expect to pay between €60 and €190 a week for summer camps. For some of the more expensive options, there is gear or goodie bags. Sometimes these are optional, which can save money.

Another way to save is to avail of sibling discounts. Most camps typically offer a 10 per cent discount for a second or third child.

Siobhán O’Neill White says some camps take a more relaxed to these discounts and will extend it to cousins or friends as well. “If you’re sending a few kids, you should always ask as the costs can really add up,” she says.

How to check it’s safe
All summer camps are required to ensure staff are Garda-vetted for child protection reasons. It’s the law. Each camp should have a designated person or officer who can confirm this.

It’s also worth asking if your summer camp has public liability insurance in case of an accident. Summer camps on school premises are excluded from standard school insurance policies, but they should have their own or have an arrangement with the school.

Science and maths
Summer camps with a focus on Stem (science, technology, engineering and maths) are proving increasingly popular.

If your child is a budding Einstein, there are plenty of options to choose from. Anyone 4 Science (anyone4science.com) is one of the biggest. Aimed at children aged four to 15, they explore states of matter, viscosity, solar energy and, yes, even rocket science.

If your child is Lego-obsessed, Learnit (learnit.ie) runs a number of camps using colourful bricks to cover concepts like robotics, engineering and physics for six to 18 year olds. Bricks 4 Kidz (bricks4kidz.ie) is another option.

Designer Minds (designerminds.ie) seeks to go one better by bringing Lego, science and technology together with art. Steam (Stem with art) is the latest buzzword in industry and education circles.

At the expensive end is the Connemara Maths Academy, a one-week residential camp in Achill Island and Rockwell College which costs up to €850. It is more than maths: there’s music technology, sound production, 3D mapping, along with football, rugby, abseiling and swimming.

Computers and technology
For the tech-focused child in your family, Whizzkids.ie offers activities such as web design, app development, video-game programming and animation. There’s also one sports activity each day, just to prise them away from a screen.

They’re held through the summer on college campuses such as UCD, DCU, CIT, University of Limerick and NUI Galway. They cater for children of all abilities. And if the full day is too much, there’s a dip-your-toe-in-the-water half-day camp.

Tech Kidz (techkiz,ie), based in the Munster area, also offers coding camps and web design for seven to 14 year olds.

Creative arts
This, of course, is a generation raised on smartphones and Youtube. So the prospect of making high-quality video may appeal.

At Young Irish Film Makers (yifm.com) in Kilkenny, you can make your own movie in a week (nine to 16 year olds), while for older teens there’s the option of a residential camp with masterclasses, workshops and training in cameras and lighting.

Most creative arts camps tend to focus mainly on art, craft, animation and creative writing, from the most basic to the most applied. Artzone (artzone.ie), based in Dublin, Wicklow and Kildare, teaches the basic skills of creating art with young children (5-7), and more challenging techniques for older pupils (8-12).

The Craft Corner (thecraftcorner.ie) in Kildare is another arts and crafts option and provides classes in Celbridge, Maynooth, Naas and Straffan.

Performing arts
Does your child love singing, dancing and acting? Starcamp.ie is one of many popular performing arts camps. Ideal for extroverts, though they can also help build the confidence of those who are a little quiet or shy.

And budding stars of the stage may be interested in the Gaiety School of Acting (gaietyschool.ie), with age groups ranging from four to 19 years. For teens, it also offers a stand-up comedy camp, with advice from professional comedians on how to hone your funny bone.

Sports camps
GAA, soccer, rugby and tennis are some of the most popular camps – though there lots of multisport or adventure options too.

Cul Camp (kelloggsculcamps.gaa.ie) is the most popular of all, with about 130,000 children aged six to 13 years taking part last year.

Rugby is growing in popularity too. All the provinces tend to run camps in their areas catering for those who’ve never touched a rugby ball to youngsters with designs of being the next Johnny Sexton (connachtrugby.ie, leinsterrugby.ie, munsterrugby.ie, ulsterrugby.com).

Parks Tennis (parkstennis.com) is one of Ireland’s most popular tennis programmes, and welcomes all children, irrespective of previous tennis experience.

Some multisport options include Astropark Camps (astroparkkids.ie) in Tallaght and Coolock, It includes football and crazier versions like bubble football.

For those with a taste for the wild, Adventure Sligo (adventuresligo.ie) runs surfing, sailing and stand-up paddle camps, as well as coastal and mountain discovery camps.