My gender-neutral friend wants to be described as ‘them’

I want to be supportive but it’s difficult. I don’t understand what gender nonbinary is 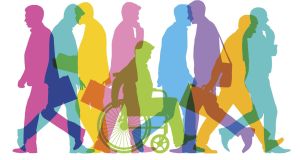 “Use gender-neutral pronouns as much as possible.” Illustration: Getty Images

I have a friend who has recently come out as gender nonbinary, and is asking people to use gender neutral “they/them” pronouns for them. I really want to be supportive but I’m finding the switch to using “they/them” difficult. To be honest, I don’t know if I fully understand what being gender nonbinary is. Any tips for getting better at pronoun usage and understanding what gender nonbinary means?

Individual experiences of being gender nonbinary vary, but generally it means a person identifies outside of or wishes to challenge the two-gender (that is, man/woman) system. They may identify as multiple genders, a combination of genders, or exist between genders.

The term can be used as a permanent gender identity, or some people may experience their gender as being fluid, in which case they may identify more as masculine or feminine at a given time – and may request that you change your use of pronouns as their gender identity changes. Some trans people may also identify as nonbinary, either as a permanent identity or during their transition, before they feel more aligned with the man/woman binary.

That may seem like a lot, but in reality it’s pretty easy to find out what a gender nonbinary identity means to an individual: ask them.

This doesn’t mean that you get to accost everyone who has a gender you don’t understand and expect them to expend their time and emotional energy educating you. People who are not cis or heterosexual are constantly forced to endure often offensive questioning, by people essentially demanding they defend their existence. This is dehumanising, exhausting and unfair.

However, it sounds like you and your friend are close, and by telling you their gender identity and preferred pronouns, they are opening up a space for that conversation with you. So simply ask them would they mind telling you what being gender nonbinary means to them because you want to understand and support them.

As for the pronoun issue, I do sympathise. It’s easy to trip over terms you’re not used to. But the important thing to remember here is that your discomfort is not the most important thing. Your friend’s sense of comfort and safety is. They are going to face constant misgendering by people unaware of their gender identity, people inconsiderate of their gender identity, or people who are openly hostile about it. By messing up their pronouns – even accidentally – you’re reminding them of the judgment and bigotry facing them on a daily basis.

But like many things, practice makes perfect, so start manufacturing ways to get fluent in gender-neutral terms.

Your concern for your friend and desire to respect them shows that you’re thinking all the right things. Put it into action.

Roe McDermott is a writer and Fulbright Scholar with an MA in sexuality studies from San Francisco State University. She’s currently undertaking a PhD in Gendered and Sexual Citizenship at the Open University and Oxford

‘I saw young girls get kicked, hit, sprayed and dragged off gasping for air’
10