From September 2018, physical education will be offered as a full examinable Leaving Cert subject, giving students interested in sports and exercise a chance to play to their strengths 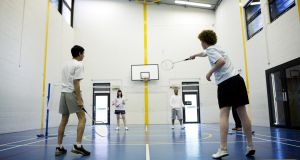 Because children rarely have the freedom to roam, explore and climb trees anymore, these skills are in decline

For some students, physical education (PE) has always been a welcome break from the books. For others, PE is that time when they are forced to play team sports, against their will, in the rain.

Now, PE is about to change for everybody. From September 2018, it will be offered as a full examinable Leaving Cert subject, giving students interested in sports and exercise a chance to play to their strengths. Announced to great fanfare, it overshadowed an equally, if not more, important announcement: finally, there will be a PE syllabus for the majority of senior cycle students who will not take it as an exam subject.

Dr Sarahjane Belton is a lecturer in physical education at Dublin City University and a former Irish rugby international. “PE has too often been sacrificed for other subjects or if the sports hall is needed for something else. A junior cycle PE curriculum has already been developed and implemented as part of a wellbeing programme and it is compulsory for each child to get a double period of PE per week. It has been hard for principals to timetable but at least the intent is there.

“My worry is that, where there is just one sports hall and junior cycle wellbeing has to be timetabled, there won’t be time or space for senior cycle students who don’t choose PE as an exam subject.”

Stephen Moore, president of the PE Association of Ireland, agrees that PE has too often been relegated.

“Until now, there has been no guide for PE teachers. A lot of PE was given by unqualified teachers, often soccer or GAA coaches who were promoting their activity and not placing the necessary emphasis on fundamental movement skills. PE teachers recognised a number of years ago that, because of increasingly sedentary lifestyles, children were not developing the fundamental movement skills – such as catching, hopping, striking and skipping – that form the basis of all physical literacy.”

Indeed, because children rarely have the freedom to roam, explore and climb trees anymore, these skills are in decline. Belton says they form the basis of sport and exercise and give us the body confidence to be active. She was a key researcher in a 2014 project on movement skills, and is currently involved in another major research project on the topic led by the Insight Centre for Data Analytics, with results expected later this year.

Adults and children clearly have mixed feelings on PE, with some loving and some hating it. There is extensive evidence to show that, by the age of 18, only 10 per cent of girls are involved in the necessary level of physical activity to sustain a healthy lifestyle. People with disabilities, as well as lesbian, gay, bisexual, transgender and intersex (LGBTI) young people can often feel excluded.

Moninne Griffith, executive director of LGBTI youth support group BeLonGTo, says that social exclusion is a problem for LGBTI young people and because of that they can avoid sport, leading to even more exclusion. “With some exceptions there is a lack of LGBTI role models in sport, and young people have a fear of being rejected or bullied if they come out while on a team. For young trans people, there is strict gender policing in sport including in changing rooms. All this adds up and means that LGBTI people don’t take part in as much physical activity, further impacting their mental health.” The upcoming LGBTI youth strategy is expected to address these problems.

Maeve Richardson, welfare and equality officer with the Irish Second Level Students Union, welcomes the changes. However, she says that there needs to be investment in sports facilities and IT facilities, as well as a focus on breaking a stereotype that there is something unfeminine about women playing sport, while all students should be supported in whatever sport most appeals to them.

“Physical literacy is so important,” says Belton. “Every person can find some activity they like – whether through activity, coaching, refereeing or sports management – although this hasn’t always happened in school. While I welcome the Leaving Cert PE programme, my concern is it may only appeal to those who already have the interest. We have to get out there and meet those other young people, and we have to ensure they get at least 80 minutes per week of senior cycle PE.”

KEY POINTS: LEAVING CERT AND SENIOR CYCLE PE: WHAT WILL THEY INVOLVE?

– Students will have to submit a video of themselves performing an activity in a choice of activities including sports such as football or hurling, adventure activities such as rock-climbing or kayaking, aquatics such as swimming or diving, or artistic movement such as ballet or dance (30 per cent)

– Written exam (50 per cent) with topics including skill and techniques, ethics and fair play, gender and physical activity, and planning for optimum performance.

– Project: students choose coach or choreographer role and complete a report on their activity (20 per cent)

– Non-examined subject, with a focus on developing fundamental movement skills

WHAT ARE YOUR MEMORIES OF SCHOOL PE?

“A lad in my school got wedgied in the changing rooms so hard that he ended up in hospital once. Other than that, PE was grand.” – Paul Hosford, journalist

“I loved PE. Hockey and basketball before and after school also. Much rather five laps of a hockey pitch for a warm-up and a game over double maths any day.” – Áine Beamish, comms and development at Leargas

“My PE teacher had a collective term for those who didn’t participate: ‘sick, lame and lazy.’ I was frequently among them. However, spending second year in the US was eye-opening: daily PE, which could be dance one day, cross-country skiing or volleyball the next. Much more engaging than bloody hockey every week, freezing in the rain and short skirts.” – Melanie Ryberg, clinical psychologist

“I hated it. Always picked last, the one team I tried out for (basketball) I didn’t make the cut. Mandatory participation in sports day; basketball jerseys that stank. I left school thinking sport/ exercise was not for me.” – Rosemary Mac Cabe, journalist and personal trainer

“By fifth and sixth year PE was a reward for doing ordinary level maths when the higher level students had their double maths class.” – Rachel O’Neill, editor, UCD College Tribune

Minister for Education Richard Bruton last month announced 80 schools around the country were taking part in the first phase of the implementation of PE as an exam subject for the Leaving Cert. Students taking the new subject from next September will sit the first Leaving Certificate Physical Education (LCPE) exam in 2020.