The female trailblazers of Irish medicine 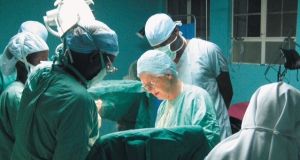 Sr Maura Lynch in the operating theatre in Uganda.

Victoria Coffey was 11 years old when her younger brother Alfred died. Her parents had already lost two children before Victoria’s birth and lost a newborn daughter, who was just six days old, a month before Alfred’s death. Growing up in a household that had lost four children, three in their infancy, it’s not surprising that Coffey went on to dedicate her medical career to the needs of sick children.

“Vicki had no particular interest in material things,” remembers her grand-nephew Robert Coffey. “It’s clear from the path she went down that she never chased money. She did roles that were enormously overworked and very poorly paid compared to what she might have been had she gone into private practice. She wanted things to be made right and was uncompromising in that pursuit. She lost a number of siblings who died as babies and I suspect that was one of the main reasons she was so motivated to learn about the health of newborns and young children.”

Born in Dublin 1911, Dr Coffey went on to become one of the first female paediatricians in Ireland, the first woman president of the Irish Paediatric Association and one of the first Irish doctors to investigate metabolic disorders in newborns. She qualified from the Royal College of Surgeons in 1936 and became an early investigator of Sudden Infant Death Syndrome in Ireland. In 1943 she was appointed as medical officer to St Kevin’s hospital which mainly worked with patients suffering from chronic illnesses. She also conducted vital research into the effects of the thalidomide drug on women and their children.

Robert Coffey says his aunt not only found great fulfilment in her medical work but also had a love of music. “In her younger days she was a fantastic singer and she also played cello to a high standard. She won lots of feis medals for dancing and music.

“She was a non-nonsense person but with quite a wicked sense of humour,” he says. “She was not always an easy personality but being a woman in her profession at that time she probably found that necessary. Women such as Victoria and any women who managed to achieve great things often had to be twice as good as the men around them.

“It’s pretty extraordinary to not only look at all their achievements but also the barriers and obstacles that were placed in their way. Put in that context she and the other women around her were particularly inspiring.”

This International Women’s Day, Dr Coffey, along with a group seven other women doctors, will be honoured for their outstanding contribution to medicine through a series of portraits that have been commissioned to hang in the Royal College of Surgeons (RCSI) principle boardroom.

Dr Emily Winifred Dickson, the first woman to be awarded the RCSI fellowship, will also feature in one of the portraits commissioned as part of the Women on Walls partnership between Business to Arts, Accenture and RCSI. Born in Tyrone in 1866 and the second youngest of seven children, Dr Dickson initially applied to Trinity College to study medicine but was turned down because she was a woman. She went on to study in RCSI and then trained in midwifery at the Rotunda Hospital.

In 1893, quite early in her medical career, she was elected the first woman fellow of any of the Colleges of Surgeons in Britain or Ireland. She was later refused a job in the Rotunda hospital, again because she was a woman, and worked as a gynaecologist in Richmond Hospital. She was also appointed assistant master to the Coombe Lying-In Hospital in Dublin and after completing her doctorate in medicine she became an examiner in midwifery at the RCSI.

In 1899 she married an accountant named Robert Martin and gave up her career to have five children. However, when her husband returned shell-shocked from the first World War and was unable to work, she returned to medicine and became a medical officer.

Another woman who will appear alongside her male medical colleagues in RCSI boardroom is Sr Maura Lynch who spent most of her career working with women and girls in Africa. One of nine children, Sr Maura was born in 1938 and grew up in an Irish-speaking home with a father who worked for An Post and a mother who was a teacher. She joined the Medical Missionaries of Mary aged 17 and trained as a doctor in UCD. After an internship at St Vincent’s hospital and after completing a diploma in obstetrics and gynaecology in London, she moved to Angola in 1967 to work in obstetrics and paediatrics in the Chiulo Mission hospital.

“It was something she had always wanted to do from an early age, go to Africa,” says her younger sister Breda Rogers. “She knew she wanted to work with women and never wavered from that. She had thought she would go as a nurse but never a doctor.”

Rogers remembers her sister left Ireland shortly after their father died. “It was probably very difficult for my mother but it was something she would have accepted. As a family it wasn’t unusual in the Ireland of that time, there were so many Irish missionaries back then.” However, when the Angolan Civil War broke out in 1975 the family did start to worry. “That was a very difficult time for communication, there were no phones and a letter could take four to six weeks to arrive. She wrote all the time and her letters were very descriptive. She was a great story teller.”

After a brief trip back to Ireland in 1984 to train as a surgeon at RCSI, Sr Maura returned to Africa and moved to Uganda where she offered critical care in obstetric fistula repair. “Through her work in Africa she came to realise how badly treated and undervalued women were, particularly in places where young girls were being forced into marriage and having babies,” says Rogers.

Sr Maura died in December 9th 2017 – the day she was to celebrate the 50th anniversary of her arrival in Africa. “She didn’t want to retire to Ireland. When it came to her last years she said she wanted to be buried in Africa. And she got her wish.”

RCSI chief executive Professor Cathal Kelly says the portraits of Dr Victoria Coffey, Dr Emily Dickson and Sr Maura Lynch, along with portraits of five other pioneering Irish female doctors, will finally bring these significant contributors to the advancement of Irish medicine and science out of the shadows and into the public eye where they belong.

“These paintings will hang in our front boardroom where all our major events are organised. This college has a global reach and we have a responsibility to do the right thing in terms of equality, diversity and inclusion. We want to support women leaders of the future by making women leaders of the past visible and by raising their profile.”

On March 1st 2018, Royal College of Surgeons in Ireland in partnership with Accenture announced an Open Call to Artists to commission eight new portraits which will be unveiled in 2019. All details can be found at businesstoarts.ie/artsfund/women-on-walls/

The project organisers are looking for an image of Mary Josephine Hannan, one of the eight women to be painted. If you have a photograph of Hannan, or know any of her living relatives, please contact the RCSI at businesstoarts.ie/artsfund/women-on-walls.

Mary Josephine Hannan signed the Roll of Licentiates of the Royal College of Surgeons in Ireland in July 1890, with address as Riverstown, Killucan, Co Westmeath. She worked in India and latterly in South Africa. She features in the Dictionary of Irish Biography with dates 1865-1935? but with no family background.