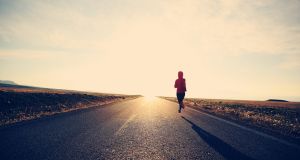 This is how I found myself crying early one morning in January – for the three weeks I had been living in a studio apartment in Daytona Beach, Florida, I had gone running four times a week. On that particular day, I ran down to the beach, turning right when I hit the sand so that I would see the sun rise.

The sight wasn’t new, but on that day I felt so good and warm and light that, just as the sun crested over the waves, that well-worn line from Annie blasted through my mind: The sun will come out tomorrow.

And I burst into tears.

In an effort to outrun more than a year of depression and grief, and the seasonal affective disorder that swamped me most winters since childhood, I had become a 37-year-old snowbird. The tears that morning were a mixture of joy and relief because, in pointing my car – packed with three duffel bags of clothes and a box of books – south for most of January and February after the worst year of my life, I had finally started to feel whole again.

I hadn’t for a long time.

Last January, I was hit by both the death of my dog and, soon after, the forced sale of my home, which together uncorked a depression unlike anything I had ever known.

Sure, I had had bouts with depression before, especially in winter. Seasonal affective disorder was first given a name in 1984 by Dr Norman E Rosenthal and his colleagues. I was a toddler then, but even when I was in grade school I knew what it was. My father always called it “baseball’s offseason,” saying the worst part of the year was the stretch from the final World Series game to the first day of spring training, a time when most of our six-member family would be folded into a long, black mood.

I had gone to college in Tampa, which sidestepped the issue for a little while, but as an adult, in winter, I would fold again. So I set up a double-edged solution: I would sign up for a long spring race (from 10 miles to a marathon), which meant that I was exercising (always a useful tool against depression). It also meant that I would run long miles in the middle of the day, and soak up as much sun as I could in New Jersey in January, February and March.

But this year was different.

I knew that I would never get my head above water if I stuck it out through another New Jersey winter. That’s why, with no pet to care for, no house to pay for and a transportable job as a freelance writer, I opted out of the season and headed south.

Running still played a part in my treatment. I chose an easy running schedule to train for the Daytona Beach Half Marathon: no speed work, no hills, just plain old miles four days a week. On cooler – for Florida – days, I’d run in the late morning, my skin tanning and highlights streaking through my hair two weeks in. For long Saturday morning runs, I would start before dawn and watch the sunrise along with drinkers and smokers and tourists. I’m sure I ended up in the background of a lot of their photos.

Every day, I drove my newly adopted dog to a dog park one town over, where she would run around sniffing other dogs while I turned my face to a warm, welcoming sun, then drive home humming to whatever Top 40 hit was on the radio. I felt like I was a flower unfurling its petals at dawn. I started smiling again. I started flirting again.

Last year I had cut a foot off my hair because I loved it and felt like I didn’t deserve to be beautiful.

But in Florida, I decided to grow it back out. I met a friend in Walt Disney World and skipped down Main Street in a Donald Duck sweatshirt and wanted people to look at me. I felt like myself again: sometimes cantankerous, sometimes moody, but often funny and chatty and gladly writing and running.

By race day on February 4th, even though I was far off my personal record, I still grabbed my medal and a beach towel at the finish line, and celebrated with a beer and grilled cheese (then a long, hard nap, after which, even more improbably, the Philadelphia Eagles, my hometown team, won the Super Bowl).

This week I packed myself and the dog up to drive back to New Jersey without quite knowing where I will plant myself to start my life again (though my mother’s spare room works for now).

I don’t know if I can be a snowbird every year. I assume I will eventually add rent or mortgage to the list of bills to pay.

But I’m going to try, even if it’s only for a week or two: for more winter sunrises, for more sunlight, and even for more – why not? – joyful crying.

Is my on-again, off-again relationship worth the heartache?
6