Is the treadmill at the gym ‘real running’ or is it cheating?

Pounding pavements should have prepared me for a few kilometres on a machine, I reckoned 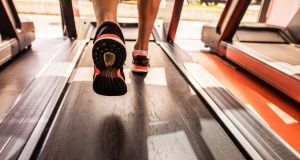 Having grown wearily sick of swearing miserably at the Baltic weather as I put on my gear ahead of yet another run through the frozen wastelands of the Phoenix Park, I decided to take it all indoors, to my swanky Smithfield gym.

My gym has all manner of fancy running machines and I figured it would be no harm to give my knees a treat by trying them out for a week or so on the bouncy rubber surfaces of the machines while also cocking a snook at the cold.

Now, when I were a lad, treadmills were simple things – you selected a speed and pressed start and away you went, sweating furiously on a road to nowhere. But they have come a long way since then and there are were six or seven different running systems in my gym, including a couple that allow you to “run” while defying gravity – you sort of strap yourself into the machine and swing your legs.

Such machines are high tech, but they are not for me so I went to the actual treadmills. But once I had navigated all the touch screens and programmed complicated gait options and running styles and gradients, and all the rest, almost half my allotted running time had elapsed and I’d not so much as gone a single metre.

Ignoring the time pressures I had suddenly put myself under by being as savvy as Homer Simpson when it came to setting up the machine, I set off to a soundtrack of early 90s dance music – as chosen by the gym.

Just one kilometre into what was supposed to be a gentle indoor run I was absolutely flaked. As Technotronic urged me to Pump Up The Jam I considered jumping off the machine and going back to the park.

Or going back to bed, truth be told.

I was at a loss as to what was going on. Weeks of pounding the pavements in the park should have better equipped me to run a few kilometres on a machine, I reckoned. I wanted to stop. But I kept going and my run got harder and harder. Eventually my 40-minute ordeal came to an end and I was less than pleased to see I had covered a paltry 4km or so.

I stared mournfully at the machine. It was only at that point I realised I had inadvertently selected some class of ridiculous endurance programme and my machine had taken me on a trek up South Africa’s Table Mountain.

Now, I have never been to Cape Town, but I can still surmise that Table Mountain is a more gruelling run than a little trek around Dublin Zoo. No wonder it nearly killed me.

While I raged against the machine, I did not give up on it.

Two days later, I was back and running on the flat – around a virtual racing track. With no hills to contend with I covered a creditable 8km in just over 40 minutes – almost twice as fast as I managed previously.

The machine was also able to tell me how many calories I had burned – 534 – and my average speed and it measured my heart rate and set me a target to beat next time and it was definitely a lot less harsh on my ageing knees. It was – by almost every single measure – a more enriching experience that an actual run in the park.

Even if my park has never taken me on a surprise trip to South Africa.