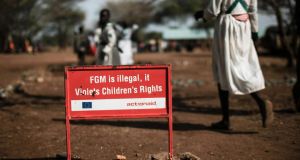 The practice of female genital mutilation (FGM) on young women living in Ireland has increased significantly in recent years with the number of women who have undergone procedure rising by more than 50 per cent since 2013.

FGM support groups and women’s health organisations have called on the Government to allocate additional funding to support services for women affected by the procedure after the latest census figures showed an estimated 5,790 women and girls living in Ireland have undergone FGM, up from 3,780 in 2013. An additional 2,700 women and girls living in Ireland are believed to be at risk of FGM.

In a statement marking the International Day of Zero Tolerance for FGM, Akidwa, the national network of migrant women living in Ireland, commended the establishment of a FGM clinic with the Irish Family Planning Association but warned that greater co-ordination was needed among social workers, gardaí, teachers, health workers and members of affected communities as well as engagement from men and faith leaders to effectively tackle to practice.

“FGM often remains a secret practice and almost impossible to monitor as girls return to their home countries with family members for the procedure which is often performed by traditional practitioners, said Alwiye Xuseyn from Akidwa.

The ActionAid charity called for the Government to urgently implement a comprehensive FGM law that deals with the prosecution, prevention and protection measures. ActionAid, which recently carried out a 12-week programme in Cork with migrant women, men and girls living in direct provision centres, said increased funding for specialised services, resources and trained professionals was also needed.

The Ifrah Foundation, which was set up by the 29-year-old FGM survivor Ifrah Ahmed who lives in Dublin, launched an international Thunderclap campaign against FGM in Dublin on Tuesday, calling on survivors worldwide to speak out about their experiences using the #MeTooFGM hashtag. Close to two million people across six continents had tweeted using the hashtag by Tuesday afternoon showing their support for the campaign.

The latest calls for additional supports for victims of FGM in Ireland follow reports that a couple accused of genital mutilation of their daughter at their home in Dublin have been sent forward for trial. The couple, originally from an east African country, are accused of carrying out FGM on the girl in September 2016 and are also charged under the Children’s Act for allowing a child to be assaulted, ill-treated or neglected. It is the first ever FGM case to be reported in Ireland.

An estimated 200 million girls and women alive today have undergone FGM, which is the permanent partial or total removal of the female genitals. It is often performed on girls before they reach puberty, traditionally without an anaesthetic. The mildest form, known as a clitoridectomy, involves the partial or complete cutting of the clitoris.

Type 2, known as excision, is when the clitoris and inner lips (labia minora) are cut off. In some cases the outer lips are also cut. The most extreme form of FGM is known as infibulation: the opening of the vagina is narrowed and sealed by sewing or stapling together the two sides of the vulva. A very small single opening is left to allow urine and menstrual fluids to pass.

The practice tends to be carried out on young girls between infancy and the age of 15 with the highest prevalence among women and girls in Somalia, Guinea and Djibouti.

Irish holidaymakers have been thrown under the bus
4

Ireland’s Covid dead: Bill Taylor was a Bohemians player and a man of learning
Real news has value SUBSCRIBE