‘I sat down in our quiet house and realised I had not one person I could call. I cried’ 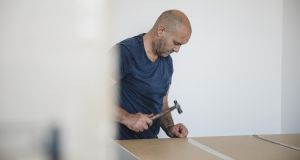 Running around the playground, it’s a pretty simple sentence to say. But walking up to other adults and asking, “Do you want to be my friend?” isn’t a line that rolls off the tongue for most grown-ups.

Maybe it needs to be though, especially for middle-aged men.

Middle-aged men are struggling with isolation because they find it difficult to maintain friendships as they age and it’s having a negative effect on their lives.

It’s bleeding into their mental health too.

Research from The Men’s Health Forum in Ireland (MHFI) last year found the suicide rate among middle-aged men (40-59 years old) in the Republic of Ireland is the highest of all age cohorts.

But what is it that stops men from making and maintaining long-term friendships?

Those childhood friendships and teenage alliances we all make tend to peter out as marriage, moving, career changes, families and life comes calling with its multiple demands. It leaves many of our friendships hanging in the balance and middle-aged men struggle the most.

Researchers have found that chances of friendlessness among men trebles by late middle age.

Barry Sheridan, who is CEO at the Irish Men’s Sheds Association, says this trend in men this age is like a hidden issue that is not spoken about a lot.

The men’s shed movement, which originated in Australia to promote the overall health of men, helps provide social spaces where men of all ages can gather and socialise.

“We all want to be part of something, whether it’s a place or the people we hang around with. But middle-aged men often tend to devote themselves to work and family and as they grow older they are almost displaced. They lose themselves and many feel a deep lack of connection.”

The aim of men’s sheds is to provide a social space for men of all ages to hang out together. “Our motto is ‘shoulder to shoulder’, because men are not always comfortable with face to face communication. A lot of men’s shed activities start side by side.”

Psychotherapist Phil Gormley has developed his counselling practice around this premise. He provides walk and talk therapy to his clients in the Phoenix Park or the mountains in Wicklow to take the pressure off opening up. “Men will go for a few pints or watch a match together but they don’t talk about any of the deeper stuff or feelings. When things get overwhelming for men, they don’t really have the skills or an outlet to express themselves and the pressure builds.”

Therapy while walking side by side in nature helps men open up, says Gormley who says he also struggles with friendships as a middle-aged man. “It is a tricky time, there’s a lot of superficial small talk that goes on in a man’s life and if you’re not into sport, that makes it even harder. A lot of men don’t know how to express how they feel and so, reaching out and starting a conversation or developing a new friendship is a whole other level.”

Sheridan agrees and says the most important tool in a men’s shed is the kettle. “We are trying to create a safe space so that we can have these conversations without stress. So coming in and making a cup of tea and having the chat is a great start for a lot of men. The hardest bit is take the chance to walk in the door.”

Feeling isolated can creep up on you, says Sean. Age 59 and after taking early retirement, he described himself as “completely lost” in recent years. “Your work friends fall away because mostly what you had in common was work and I am not there anymore. All our children have left home and my wife is enjoying her freedom and I sat down one day in our quiet house and realised I had not one person I could call. I cried.”

A neighbour mentioned a community project to Sean, which turned out to be a lifesaver. “I’m not sure how far I might have sunk if I had not volunteered that week. It’s got me out and in touch with men and women of a similar age and given me a sense of purpose again. There was literally no one I could say this to at the time though. That still makes me sad.”

So how do grown-ups make friends?

Sheridan invites any man to walk into their nearest men’s shed. “There’s no hierarchy, there’s no false small talk, it’s just a safe environment to be you. We’ve been able to take huge steps in helping men open up and ask for help.”

Psychologists agree friendships are formed around shared experiences. Joining a group or volunteering is one of the easy steps to take if loneliness has a grip on you.

Gormley says you need to be proactive. “It does take a bit of bravery, a leap. Don’t sit and wait – it won’t happen. You have to actively search for new friends. If you’re struggling, do yourself a favour and speak to someone. It’s a cliché but talking really does work.”