Fathers with hands-on approach to parenting makes for happier mothers 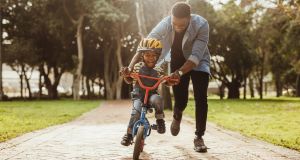 Most parents find that children bring a sense of meaning to their lives and a deeper joy that well compensates for the fall in happiness. Photograph: iStock

According to Cadhla McDonnell of Penn State University where the research was conducted (she is also a postdoctoral researcher in sociology at Trinity College Dublin), the difference in happiness levels between mothers and fathers can be found in differences between their caring activities.

This, I think, suggests ways in which men can contribute to a higher happiness level in their female partners to the degree that the demands of their workplace allows.

But first, I should say that the fall in happiness levels when children arrive doesn’t necessarily mean that in order to get the most out of life you should at all costs avoid having children.

Most parents find that children bring a sense of meaning to their lives and a deeper joy that well compensates for the fall in happiness.

Happiness in any case is not necessarily the purpose of life. Most of us, if offered guaranteed happiness in return for inflicting misery on those we love, would say no.

According to Ms McDonnell, quoted in Neuroscience News, the traditional view of caregiving “would suggest that mothers might find caring for their children more meaningful than fathers do. “But that’s not the case – mothers and fathers both found caring for children highly meaningful and there is no difference by gender.”

The research is based on data from the American Time Use Survey which looked at 4,486 childcare activities (parents will not be surprised by the number of activities), who carried them out and how they felt at the time.

The caring undertaken by fathers tends to be more recreational and focused on the weekend. Infants are more likely to be cared for by the mother without the father present.

These differences explained why mothers were less happy. “A family trip to the playground is going to affect someone differently than changing diapers in the middle of the night, for example,” as Ms McDonnell points out.

They also explain some of the differences in levels of stress, which are higher in mothers. They don’t explain why mothers are more tired than fathers however, according to the researchers: I expect this has something to do with the eternal vigilance that’s involved in looking after kids. If you never really relax you are bound to be tired.

“For couples, how can they share caregiving in a way that is equally rewarding for both partners?” asks McDonnell.

I think the answer to this often comes down to the demands of work.

Men are far more keen than in the past to be closely involved in the details of the children’s upbringing. In a situation where the woman had a fairly long period of maternity leave and the man’s best chance of being with the kids is at the weekends, one can see how the more “recreational” caregiving is done by the men.

However, paid work must be done to keep roofs over heads and this affects the availability of both parents, particularly fathers since it’s mothers who tend to stay at home full-time with the children, especially when they have more than one child.

Still, I don’t see why men cannot do, when they are available, the more hands-on and less enjoyable aspects of caregiving. That might require a conscious decision on the part of both mothers and fathers.

Welcome improvements in unpaid parental leave (rising from 22 weeks now to 26 weeks next September) could help to shift the balance though not by very much unless that conscious decision is made by parents about how to allocate the responsibilities. Two weeks’ paid parental leave (in the form of a social welfare benefit) will be introduced from November and will increase to seven weeks over the next two years. You can find more information on this at citizensinformation.ie. The results of the Penn State research on parental happiness were published in the Journal of Family Issues.