Researchers turn to ‘poop pill’ in search of cure for obesity 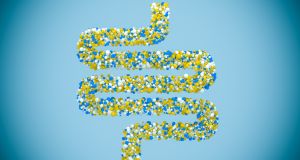 In recent years, scientists have uncovered clues that the microbiota, the community of trillions of microbes that live in the gut, plays a role in weight gain and metabolic disease. Photograph: iStock

Dr Elaine Yu, an endocrinologist at Massachusetts General Hospital in Boston, was inundated with volunteers when she put out a call a few years ago for overweight people who were willing to take part in a study of obesity and the microbiome.

People as far away as Alaska and Hawaii were eager to enrol. But the most surprising part was what they were willing to do. The study required them to swallow capsules containing stool to test whether gut bacteria from lean donors could improve their metabolic health.

“We had this concern that it would be difficult to recruit people because there’s a certain yuck factor with having to take a poop pill,” Yu said. “But we had an overwhelming number of volunteers wanting to participate.”

The link between the gut and metabolic disease is a growing area of obesity research. In recent years, scientists have uncovered clues that the microbiota, the community of trillions of microbes that live in the gut, plays a role in weight gain and metabolic disease. Now, in small studies, they are exploring whether they can spur changes in metabolism and potentially in body weight through a therapy known as faecal microbiota transplants, or FMT, which transfers gut bacteria from lean donors to the guts of obese patients.

The research, which is still in its infancy, has yielded mixed results and plenty of scepticism. Experts say faecal transplants will never replace diet, exercise, behavioural therapies and other standard interventions for obesity and Type 2 diabetes. But some believe they could lead to the discovery of bacteria that protect against metabolic disease, and perhaps become one of many tools that help obese patients who are struggling to shed pounds.

“Obesity is a very complex disorder,” said Dr Jessica Allegretti, the director of the Faecal Microbiota Transplant Programme at Brigham and Women’s Hospital in Boston. “Perhaps the microbiome is a contributing part of it, and maybe for everyone it’s slightly different. But even for patients where the microbiome is playing a big part, I think this would be something that is part of a larger weight-loss programme.”

Scientists have known for some time that the microbiomes of obese and lean people differ in striking ways. Obesity, insulin resistance and fatty liver disease are associated with less microbial diversity and higher levels of a group of organisms called Firmicutes. It is not clear whether the obesity and diseases come first or vice versa. But there are indications that the microbiome plays an important role.

Scientists have found differences in the gut bacteria of children as young as six months old that can predict future weight gain. Studies of obese mice show that they harbour gut microbes that are better able to harvest energy from food, and when their microbiota are transplanted into the guts of lean mice, the svelte recipients gain weight.

While these findings were coming to light, scientists discovered that faecal transplants were a remarkably effective treatment for Clostridium difficile, a devastating bacterial infection that often occurs when antibiotics decimate the healthy gut bacteria that keep it in check. Faecal transplants from healthy donors, administered through colonoscopy or capsules containing desiccated stool, reintroduce beneficial bacteria to the guts of ailing patients, providing resistance against C. difficile.

In at least one case described in a medical journal, a lean woman who received a faecal transplant from her overweight daughter to treat a C. diff infection quickly gained 34 pounds. Her doctors, however, said they could not be sure that the transplant fuelled her sudden weight gain.

Dr Purna Kashyap, head of the Gut Microbiome Laboratory at the Mayo Clinic, said that treating C. diff with a faecal transplant makes perfect sense because it dislodges a harmful pathogen and restores equilibrium to the gut. But obesity and metabolic disease are far more complex, driven by an array of factors, including genetics, diet, environment and lifestyle. The idea that a single intervention, a transplant of a new community of microbes, could effectively treat obesity is unrealistic, he said. “The logic behind it falls apart,” he added. “It’s saying, because I don’t know what’s going on, let me just treat it with everything that I have and hope for the best.”

Some researchers nonetheless wondered what would happen if obese patients were given the gut microbes of slender people. The first direct test of this came in 2012. Dutch researchers showed that transferring a lean donor’s microbiota to the guts of obese men with metabolic syndrome led to a sharp increase in the recipients’ insulin sensitivity and their microbial diversity after six weeks, suggesting that the transplants influenced their metabolisms.

At Mass General, Yu and her colleagues recruited 24 obese men and women with insulin resistance, along with four lean donors. The donors were screened for an array of medical conditions to ensure that they were healthy and would not transmit any infections to the recipients. The researchers selected donors who had a history of always being very lean: Their ideal candidates were people who said they could eat whatever they wanted and still remain skinny.

“There could be many reasons why those people are special,” Yu said of the donors. “There could be genetic reasons that are unrelated to the microbiome. But we had to start somewhere.”

Half the obese subjects took specially prepared frozen capsules containing stool from the donors on a weekly basis, while the others received a placebo. After 12 weeks, the researchers found that the faecal treatment was safe and tolerable and that the subjects had acquired microbiota that resembled that of their skinny donors. But overall, unlike in the Dutch study, there was no improvement in their metabolic health. Like much of the microbiome research to date, both trials were small and exploratory and did not reach definitive conclusions.

Two other small studies led to some provocative findings. In one, at Brigham and Women’s Hospital, Allegretti found that faecal transplant capsules shifted the microbiomes of obese subjects and led to positive changes in their bile acids, digestive aids that are produced by the liver.

Another study in Canada looked at the effects of faecal transplants on liver fat in people with fatty liver disease. While the results are under peer review and awaiting publication, the authors said that the treatment led to changes in the recipients’ guts, making the gut membrane less permeable, or “leaky”.

This is important because one hypothesis for how an abnormal microbiome could contribute to metabolic disease and weight gain is by damaging the gut barrier that keeps toxins and pathogens from crossing into the bloodstream. When this occurs, it can set off a cascade of inflammation, contributing to insulin resistance, cardiovascular disease and autoimmune conditions, said Dr Michael Silverman, the lead author of the study and the chairman of infectious diseases at Western University in Ontario.

None of the studies were long enough to assess changes in body weight. But some of the researchers plan to follow their subjects longer to gather more data on weight and other outcomes. Yu said that further research could help identify pathways that lead to new drugs or probiotics that alter the microbiome.

Still, Yu said a capsule containing a cocktail of beneficial microbes is never going to be a silver bullet. “It would be great if there was a treatment that could come out of this research,” she added. “But I don’t think we’re going to find some magic potion that will be able to cure obesity in the absence of any other intervention.”