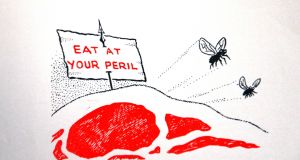 The Department of Health’s advice on exterminating flies, part of the ‘Health Hints For The Home’ package of eight leaflets distributed to Irish households in 1953.

In the mid 1950s, the Department of Health circulated an envelope of eight pamphlets to houses countrywide, with an accompanying letter from minister for health James Ryan.

The third of these leaflets was dedicated to “Flies”. At the time, D.D.T. was a common pesticide, distributed free of charge for insect control. Its use here has long been banned because of its harm to humans, animals and the environment. And, of course, it is now illegal to burn household or garden waste.

Flies lay eggs, which develop into maggot, and then into young flies, when the warm weather comes. The eggs are laid on rotting vegetables or animal matter, on manure and refuse dumps, so that the young maggots will have a good supply of food when they are growing up to be flies . . . They feed on this dirty stuff, and carry off, in their stomachs and on their legs, the filth and the microbes with which they have been in contact. This would not matter so much, were it not for the fact that these same flies also have a great liking for our food, which attracts them in swarms, crawling over the butter, falling into the milk, getting stuck in the jam, and generally walking over, and into, anything left uncovered in our homes.

And – here’s the important point – as they walk, and as they feed on our food, they leave behind them millions of microbes which they have brought on their dirty little bodies from their breeding grounds out of doors.That’s why these little creatures are so important and so dangerous – because they have two choices of feeding ground, dirty rubbish and our food; and they go backwards and forwards from one to the other, carrying microbes into our homes, and poisoning our food.

Every summer, many people (especially children) fall seriously sick and some die just because their food has been soiled by flies.

How to Wipe Out Flies

What can we do about this danger? There are several important and helpful things we can do, and everyone should lend a hand in getting the fly menace under control.

First, prevent flies from breeding by cleaning up the dirt and refuse lying about; if you can’t get rid of it any other way you should burn it . . . Secondly, kill the flies with the best weapon we have – D.D.T or a similar powder. You may obtain a supply of D.D.T preparations for household use free of cost at your local dispensary. Scatter it inside and outside the house. The more flies you kill, the less chance they have of breeding.

Thirdly, keep your food covered, especially the children’s milk (this is most important) . . . Vegetables and fruit should be well washed under the cold tap, and then kept under cover. And housewives should have the good sense to avoid dealing in any food shop in which the flies are allowed to walk on the food and which is not kept clean and tidy.

Be Kind: how to change a person’s day with just one word
3

What sold for about €500k in Ballsbridge, Dalkey, Sallynoggin and Lismore
6