Conor Pope: I get updates in a plummy English accent like Brexit in the palm of my hand 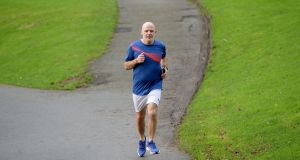 “I selected the ‘your conscience’ voice setting for my next run, fully expecting it to pepper my runs with reminders of all the ways I had failed at life.” Photograph: Alan Betson

I managed to run 7.3 kilometres last weekend in a gale so strong it’s a wonder I didn’t end up in Oz at the feet of the wizard before the ordeal came to an end.

The wind isn’t that important – although I am blaming it for my glacial pace – but I reckon the “point three” matters a whole lot more. Even though it is a small number, that extra 300m shows how we far we have come as a running nation over the last decade or so.

Had I run my windswept circles around the perimeter of the former psychiatric hospital and current home of the college formerly known as DIT four times in times past, I would – probably – have found myself straitjacketed behind its forbidding granite walls.

I’d definitely have been able only to roughly estimate the distance travelled and, being useless at such things, I would have guessed each circuit to be about a kilometre.

But thanks to the pacey march of technology, I measured my progress with an uncanny precision and I know for certain that each time I made it around the grounds I covered 1.57km. For students of maths who have been able to work out that four times 1.57 is only 6.28 kilometres, I made up the extra distance by running slightly smaller circuits like a gombeen while waiting for my children to finish their GAA training.

I had my smartwatch watching me closely as I ran but the monitoring from the magic cloud did not stop there. After an infuriating battery-related letdown last week when my supposedly smart watch gave up the ghost in the middle of a run, I had back-up.

I downloaded RunKeeper on the advice of a colleague. It is an app beloved of runners everywhere and uses some class of wizardry to record how far and how fast people run. It also maps the run and even allows people to post details of their amazingness across various social media platforms and invite friends to join them in running enterprises.

My first impression wasn’t great. For a start it measured my run in miles and gave me progress updates in a plummy English public-school-educated accent. It was basically Brexit in the palm of my hand and I half expected it to hear it drone “Let’s just get it done,” as I ran.

Every few minutes, as I circled Grangegorman, the Brexiteer told me how far I’d gone and at what speed I was travelling. It always sounded disappointed.

I subsequently found out that the voice settings are easily changed and RunKeeper’s vocal range includes a drill instructor’s voice, a Cockney (innit), a Boston accent, a mademoiselle and – intriguingly – “your conscience”.

Obviously, I selected “your conscience” for my next run, fully expecting it to pepper my runs with reminders of all the ways I had failed at life. Instead it promised me wine and feasts if I completed my run. It never delivered on those promises.

My downloading frenzy didn’t stop there. I also paid for an app – a whole €3.49 – which tells me in real time how fast my heart is racing. On my big run it was going a lot faster than me and spent much of the time beating at more than 150 beats per minute. Dr Google tells me that this is okay but it was still alarming to see all the red alerts as I ran.

It doesn’t just monitor my running and every couple of minutes of my day now it records my heart rate and saves the data somewhere – the CIA headquarters in Langley maybe? – allowing me to measure out my life, not in coffee spoons as once was the fashion, but in bar charts and red alerts, which is only fabulous.