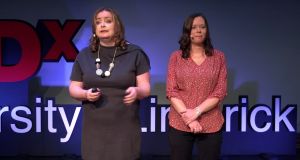 Máirín Murphy and Ellen Ward, co-founders of Tech for Good Dublin. ‘There is a vibrant group of change-makers in Dublin who are advocates of a trustworthy and ethical approach to technology,’ says Ward

There is widespread concern about many aspects of technology, from oversharing and endless scrolling of social media apps to cyberbullying and the internet’s easy access to pornography. But there is also a growing movement of people developing free technological solutions to social and health problems who are want to develop the internet as a safer, more ethically driven shared space.

Tech for Good is an example. An Irish branch of this global community working for positive social change using technology was set up in Dublin in 2017.

According to the co-founder of Tech for Good in Dublin, Ellen Ward, many people are not content to be just consumers of technology – they want to be producers of technology that has social benefits. The group brings together techie-minded people with non-techies who are keen to move beyond the idea of technology as a commodity and develop technological solutions for social, health and educational problems.

“We have a human rights-based approach to technology. We also encourage diversity and equality. We see ourselves as an antidote to the negative side of Big Tech,” explains Ward. Businesses donate venues for talks for free, speakers are not paid and everything is done on a voluntary basis.

Since the Dublin branch started in March 2017, it has hosted more than 20 events in which free technological solutions to social, health and educational issues have been profiled. “There is a vibrant group of change-makers in Dublin who are advocates of a trustworthy and ethical approach to technology. Our free meet-ups are a chance to amplify the voices of small projects,” says Ward whose day job is IT project manager for Concern Ireland.

A free Irish sign-language app and an app for volunteers working with homeless people in Dublin are examples of projects profiled so far. Andy O’Sullivan, a software engineer who works for Liberty IT, developed the free app for the Inner City Helping Homeless charity. “Sometimes, expensive solutions for charities are created and they aren’t what are needed. We went out with the volunteers on the streets of Dublin and built an app with essential contact numbers, resources, maps and a tool to count people. This was based on ‘server-less’ technology, which means there are no maintenance fees for the charity,” says O’Sullivan.

Cheap printers that use 3D printing technology to make artificial limbs for children awaiting surgery was another project profiled in Dublin. Developed by social enterprise The Rapid Foundation, these low-cost medical devises are used in countries across the developing world. “The benefit of cheap printing means that multiple versions of the product can be printed out for use as the children grow,” says Ward.

Máirín Murray, co-founder of Tech for Good Dublin, runs Digital Doddle, a digital company that specialises in educational technology for health and medical sector. Steth-o-cope, an Android app she developed with clinicians at Galway University Hospital, aims to help interns cope better when they are called to manage an unwell patient on the ward. The app prompts the intern with a list of steps to follow.

Tech for Good applauds the vision of Tim Berners-Lee, the founder of the web who in 2019 launched a global action plan to save the web from political manipulation, fake news, privacy violation and other malign forces.

This so-called Contract for the Web is intended to be a wake-up call to governments, technology companies and individuals to make firm commitments to protect the web from abuse, open it up to people with disabilities and those with minority languages and to ensure that its chief role is to benefit humanity. Murray has also been appointed as Irish representative for Women AI Ethics. She believes an ethical framework will be essential to guide and shape the impact of artificial intelligence so that people are protected from being harmed or disadvantaged by the use of AI.

Mark Culleton, chief operations officer of Idylexic, a social and educational network for people with dyslexia and attention deficit hyperactivity disorder (ADHD), spoke at a recent panel discussion with Tech for Good in Dublin.

“Idylexic is a safe place for people with learning difficulties to share their stories and for children with dyslexia and ADHD to meet up,” says Culleton. The website also facilitates parents, teachers, mentors or coaches to come together online to work with specific children and upload personalised content for the children to work on at their own pace. “We are building a community that can interact with each other,” says Culleton. Based in Kilkenny and founded by tech entrepreneur Brendan Morrissey, iDyslexic is part of Enterprise Ireland’s new frontiers programme in Limerick and Microsoft AI for Good.

Other previous speakers at Tech for Good Dublin include Hannah Bryson, a computer science student and disability rights officer at University College Dublin. She gave a talk about her experience of dyslexia, dyspraxia, ADHD and autism and how she designs the teaching experience at Coder Dojo events for neuro-diverse children. Gearoid Kearney, chief executive of My Access Hub, talked about how his start-up creates animations and virtual reality experiences to educate people about creating autism-friendly workplaces.