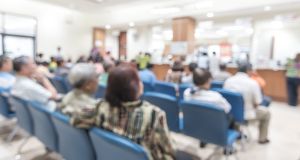 Two major issues have emerged so far in the upcoming general election: housing and health. The health service has been under the cosh for well over a decade, leading to a sense, for some, that it is unfixable. Despite significant additional investment, the perennial hospital access crisis is now no longer a seasonal winter problem but has also seeped into other essential services.

When children with cancer are unable to access planned chemotherapy treatments, a Rubicon has been crossed.

I have always believed the measure of a failed, rather than a struggling, health system is when it is unable to provide timely and reliable treatment for cancer and cardiac patients.

A general election is a once every few years opportunity for us to say to politicians “enough is enough”. So when Dáil candidates come knocking on your door over the next 10 days or so looking for a vote, may I suggest you ask what they and their party will specifically do, if part of the next government, to address the following issues:

Will I have a local doctor when the present incumbent retires?
This is especially important for those living outside our major cities. We already have too few GPs which is resulting in pressures in both the regular service and in the out of hours service. Many patients are now unable to register with a GP. Over the past 10 years, there has been a significant rise in the number of patients per GP (from 684 per family doctor in 2008 to 830 people per GP in 2018). We are now at the point where many rural and semirural areas will simply not have a local doctor.

Will you, as a TD, support the current Health Service Executive model without major modifications?
As the service at the coalface continues to become more dangerous for patients it is impossible to justify an ongoing increase in senior administrative posts while there is a simultaneous recruitment freeze on nursing, allied health and medical jobs. In government, will you make a reduction in “feather nesting” management posts a priority? And will you introduce a regulatory system for HSE administrators?

Will you make care at home a statutory right?
At present, the system for allowing older people to return home after a hospital admission is haphazard and postcode dependent. It contributes directly to delayed hospital discharges. Homecare needs to be put on the same statutory basis as the Fair Deal nursing home scheme.

As a TD in government will you work towards Ireland achieving OECD average levels of hospital bed capacity and numbers of healthcare professional?
We require 800 additional public hospital beds within two years. The next government must implement a maximum waiting time of 18 weeks following a GP referral for a consultant outpatient appointment and for inpatient/day-case public hospital treatment; anything longer than this poses an unacceptable risk to patient safety because of the risk of missed diagnosis and a possible lost opportunity to utilise a particular treatment.

If my child or grandchild requires urgent cancer treatment, can you guarantee that this will be provided by the State in a timely manner?
This is a non-negotiable fundamental of any public health system. Indeed it can be applied to a cancer patient of any age but it is an especially sensitive metric for children. A government that is unable to meet this reasonable demand does not deserve to be in power.

I have been writing about the health service for more than 20 years. There is a dangerous absence of equity and consistency in the system. It’s time to call a halt.