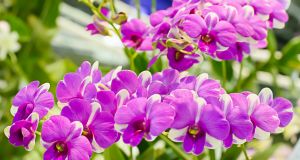 Orchids, on the other hand, are more sensitive to their environments

I have always felt a kindred spirit with spring flowers. My late mother discovered she was pregnant on February 1st and eight months later welcomed to this wonderful world little Brigid.

St Brigid’s Day has always been a celebration in my house, marked with daffodils and Percy Pigs. Though it may technically be ‘Brigid’s day’, the day resonates with us all, bringing relief at the end of the harsh winter period and a symbol that warmer days are nigh.

Spring flowers strike me as rather fun. After winter’s confinement, the flowers burst with life. They are colourful, wild, carefree. Unlike winter flowers, which to me, seem stuffy, and their preening summer counterparts, Spring flowers rejoice in their imperfection. If I lived in the flower world, I’d like to be their friend.

Most fascinating of all was the Orchid’s propensity to illness.

When I was 16, I discovered the orchid. Wow! Why had I been wasting all my time with daffodils? The orchid was precious and aspirational. When Valentine’s Day came around, I asked a male friend to buy me an orchid. He did. Well, his mom did. Along with cards for five other girls. But still, I felt special. Ill-equipped to care for the dear orchid plant, it died quickly and I forgot about orchids for a long time.

Orchids came back into my life recently upon listening to an interview on NPR’s Fresh Air. Host, Dave Davies, interviewed Professor of Paediatrics and Psychiatry, Dr Thomas Boyce, author of the book The Orchid and the Dandelion: Why Some Children Struggle and How All Can Thrive. Boyce’s book is a product of almost forty years studying the human stress response with a particular focus on children. His research has led him to loosely categorise children into two groups; Orchids and Dandelions. (However, Boyce notes that the concept of the Orchid and the Dandelion is ‘continuum of susceptibility to social environments’ rather than a strict categorisation.)

Dandelions thrive in most environments. They are fairly resilient, able to cope with stress and adversity. The dandelion will rise through cracked cement and flower. Orchids, on the other hand, are more sensitive to their environments. Orchid children find it biologically harder to deal with stressful situations. An orchid withers in the wrong conditions but nurtured attentively, the flower blooms beautifully.

It can be frustrating to watch others who pass through the world easily; those who don’t dissect the consequences of each action.

Most fascinating of all was the Orchid’s propensity to illness.

Orchids, Boyce explains, tend to have poorer immunity and much higher rates of illness, ‘physical and psycho-social’, than Dandelions. His research shows that Orchids have highly reactive stress responses – both cortisol and fight or flight – and as a result, their bodies must work harder leaving them more vulnerable to illness.

When I told my Dad about this research, I asked him if he thought I was an Orchid child. ‘Brigid! You’re an Orchid adult!’. He reminded me how, as a child, I was moved away from my teacher’s desk at school when she had coffee, always had to sit near a window, have my meat lumpy, my fruit blended, and my onions on the side.

‘But emotionally?’ I asked.

Having a chronic illness (migraine) has amplified the need to nurture the right conditions. My disability has tuned my sensitivities more finely. From perhaps a younger age than many (and an older age than others) I have had to learn to construct an environment and a way of life that allows me if not to thrive, to at least survive. More difficult again, I have had to learn to be assertive in vocalising the conditions that keep my flowers blooming.

It often feels that I just can’t get it right. No matter what I do, nor how careful I am, I still lose. The tightrope is too thin. It can be frustrating to watch others who pass through the world easily; those who don’t dissect the consequences of each action. People who were built for this world and for whom this world was built. Though I am attentive to my body, I am conscious too of not being its slave. At times it feels healthiest to throw my body two fingers and go dancing with my soul and a pint of Hop House. Fun is a part of self-care too.

When I moved home this summer, I was gifted an orchid plant. They really are beautiful. Six months later, the plant is still alive. I know better now how to care for the orchid. The flowers fell early November and though I was worried initially, I was told that this is normal.

The leaves are still healthy and the stem is strong. This time, I didn’t dispose of the plant.

Twelve years later, I am confident that while the orchid may not always flower, she will blossom again.