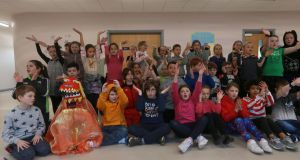 Third class pupils at Kildare Town Educate Together National School work on their intercultural play presentation which they will do at a conference in Dublin on January 17th to launch ‘Grow from Seeds’, an intercultural education resource for primary schools. Photograph: Laura Hutton

Every time Jolanta Burke, a Polish-born, assistant professor at Maynooth University’s Department of Education, is asked where she’s from, “I die inside my head”, she says, “it makes me feel I don’t belong”.

This happens not only in Ireland but also now when visiting her family of origin in Poland, as years of speaking English among the Irish have had an impact on her accent and vocabulary when using her first language.

She recalls how on a recent trip to Poland, “a guy in a taxi said: ‘You speak Polish very well.’ Yes, because I’m Polish!” she laughs.

No wonder, then, that she took both a personal and professional interest in supervising an experimental study by Irish teacher Grainne Dunleavy on “fostering a sense of belonging at an international school in France”.

A sense of belonging “is considered one of the basic human needs”, as their co-authored paper on the study, published in the “Journal of Educational and Child Psychology”, points out. It is vital not only for personal motivation and wellbeing but also for the cohesiveness of a community.

Third Culture Kids, ie those growing up in a country different to that of their parents’ native land(s), are particularly prone to feeling they don’t belong. They may have the advantages of being able to speak more than one language, have a broader world view and be more culturally aware but, when home is “everywhere and nowhere”, these children can also experience a sense of rootlessness and restlessness, according to US sociologist Ruth Van Reken, co-author of “Third Culture Kids: Growing Up Among Worlds”.

Creating a sense of belonging is one of the biggest challenges facing the international school at which Dunleavy works. It was there she devised and tested a way to enhance the feeling of belonging among a very diverse school community and this is something Irish schools could replicate.

Belonging is defined as “the extent to which students feel personally accepted, respected, included and supported by others in the school social environment”. Burke believes while it is something many schools may aspire to, they don’t take the necessary steps to cultivate it.

“It’s very frustrating that schools aren’t doing much,” she says. “Third culture kids can be in a state of limbo in a school. They are looking for people who are similar, initially on a very superficial level, such as the colour of their skin or the country they’re from.”

But that is not enough, she explains.  The challenge for schools is to help them move to a deeper sense of belonging by giving the students regular opportunities to share their interests and values, to talk about what’s important to them and their experiences.

All children and teenagers want to figure out: Who am I? Where do I belong? If they don’t have a place, “it could be very, very lonely”, she says. It can also lead to depression.

The danger of schools failing to enhance a sense of belonging among students is that individuals will seek it elsewhere, among groups that might not be good for them, such as street gangs.

The 28 pupils who participated in the four-session, classroom-based intervention that Dunleavy designed to encourage them to “dig deeper” into sharing values and finding like-minded people, showed an increased sense of belonging, along with improved life-satisfaction and wellbeing, compared to the 27 students in a control group.

Both she and Burke believe this demonstrates how school belonging relating to peer relationships can be fostered. It’s very important, adds Burke, to repeat such interventions on a regular basis as “the effect goes down”, with a person’s sense of belonging being fluid rather than fixed.

Meanwhile, what part, if any, can all parents of children with Third Culture Kids in their class play in this process?

“Get to know them as people, not on the basis of where they’re from,” says Burke. Don’t refer to them as “the Polish child” or “the Chinese child” but “learn their name and use it”.