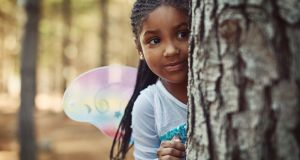 ‘As parents, there really is no harm in allowing our children to continue with occasional magical thinking coping mechanisms.’ File photograph: Getty

There are eight fairy families in our back garden. They occupy the branches and tree trunks of the silver birches dotted around the swing set. The fairy garden we made last summer for our new residents looks quite dismal after the winter, but that’s okay according to our six-year-old who believes they moved indoors through the one fairy door in the hall and will be back out in the spring.

When the weather turned and a few doors fell off the trees and the miniature garden furniture for little twinkling fairies lost its paint and cracks formed, I felt continuing this charade of make believe was a parental duty to reinforce.

The story in the six-year old’s head was as concrete as ever, if not becoming more embellished every day. Like most kids, she lives in a fantasy world of imaginary friends and make believe.

Young children have an innate tendency to engage in magical thinking, according to Dr Mary O’Kane, lecturer in Psychology and Early Childhood with the Open University. Understanding fact over fiction is a fine balance for young children who are often doubtful of reality and engaged in fierce scepticism as they try to rationalise their reality or push it past the boundaries of illusion.

“They often believe that if they wish hard enough for something to happen then it will happen and that they have caused the event,” explains Dr O’Kane. “They find it difficult to tell the difference between fantasy and reality and will accept totally improbable explanations for events.”

Case in point, the fairy door which fell a great height and smashed into pieces was not out of neglect or a lack of fairies but rather the Fairy Pipsie who decided a bit of redecorating was in order after the storm. Cue this mama gluing and painting a fairy door, way past her bedtime. Indulging my daughters make believe world is a sensitive topic. My fears of dashing her beliefs are evident but also, at what age do I stop being an enabler and when will her reality start to align with ours?

They believe they are the centre of the universe

According to Jean Piaget, a Swiss psychologist and child development expert, children often mistake fantasy, appearance, and illusion for reality until they are at least 12 years old. “During this period children are very egocentric,” says Dr O’Kane. “They believe they are the centre of the universe. They can struggle to relate to the views of others, differentiate between fantasy and reality, and understand cause and effect. They also have difficulty differentiating between animate and inanimate objects.

“So, they happily believe that objects have human qualities. For example, they might tell you that it is raining because the clouds are crying. They also believe that what they wish for can make something happen. For example, Piaget wrote about one child he worked with who believed he could make the birds and butterflies in a book come to life by chanting their names.”

The six-year-old has recently fallen in love with movies with an element of comedic peril. Her first foray into the magical world of Jumaniji with Robin Williams caused my parental instincts to go into overdrive with an incessant need to remind her about special effects and fantasy worlds as the stampede ripped through the house. Enter Dwayne Johnson in the remake and again despite the ever-imposing comedic values of the film, I ended up explaining it and all the risks she was enthralled by as the characters dropped from the sky unhurt.

As Dr O’Kane says, many children’s TV shows and films have magical characters or elements and we actively encourage them to believe in magic. “In modern day,” she says, “as parents, we expose our young children to various magical characters, Santa Claus, the tooth fairy, the Easter bunny. We also encourage them to take part in rituals such as crossing their fingers to bring good luck, waving at magpies, not walking under ladders, and so on. The one danger is that this belief in magic can cause our children to believe they have caused something bad to happen. So, if they have been fighting with their brother and wish him gone, then he gets sick, they can blame themselves.

“Dramatic play, or ‘pretend play’ can be a great way for children to work through their ideas about magical thinking. When children take on pretend roles, and agree the ‘rules’ for different characters, it is a great opportunity to explore different roles, inner thoughts and emotions. Children can act out the roles of wizards and superheroes and this play helps them to break down the barriers of reality. Play like this helps them to experiment with ideas about magical thinking and to make sense of frightening ideas. They can take the role of the White Knight and slay the fire breathing dragon.”

Dr O’Kane reminds us that learning to distinguish between fantasy and reality is an important step developmentally in moving beyond magical thinking. When I recently broke the fourth wall for the six-year-old and showed her Dwyane Johnson singing You’re Welcome from Moana, some of that magic instantly left. Jumanji became actors, cartoons had real people behind them and Johnson was more than Dr Bravestone. Perhaps linking her favourite actor to the world of wrestling was too far for her limited world of imagination to comprehend. Nevertheless, something shifted in her mind about the boundaries of reality and fiction.

“Piaget argued that as children develop more rational scientific thought, they are less likely to engage in magical thinking,” says Dr O’Kane. “From about five or six onwards our children start to differentiate between logical thought and magical thinking. They may come to understand that wishing for a pony will not make one magically appear in their garden, but they usually also pick and choose what they believe is real and will often continue to engage in some magical thinking. As they get older, they begin to question the logic behind some of the magical thinking they once believed.”

Even as our children continue to grow, they will continue to partake in magical thinking, often falling back on their imagination when times are tough.

“As parents, there really is no harm in allowing our children to continue with occasional magical thinking coping mechanisms,” Dr O’Kane reminds us. “Most of us, as adults, occasionally fall back on magical thinking at times, maybe reading our horoscopes or buying a lottery ticket, or when life challenges us, we can return to childhood beliefs about rituals to bring good luck.”