Padraig O’Morain: The idea of linking drinking and motherhood would seem weird if it wasn’t so normal 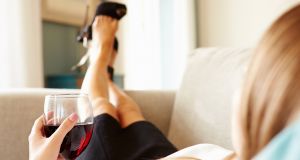 Once upon a time, when people finished work, they relaxed. But they did it in a peculiar way. They had dinner, or talked, or read the newspaper, or played with the children, or went for a walk – and the peculiar part is that they did it without pouring a glass of wine.

The equation of wine with relaxation had not yet been drilled into our psyche.

That wine is now seen as almost indispensable to relaxation was a triumph of 20th-century marketing.

As one ex-drinker wrote on the boozemusings blog, “when I stopped drinking I worried that I would not be able to deal with the stress of life. The biggest surprise to me in sobriety was that I didn’t actually need to drink to gracefully tackle my daily grind. My daily grind turned out to be a lot less grinding without the routine recovery from a bottle and a bit of wine hastily gulped the night before.”

I could very justly be accused of drawing a falsely idyllic picture of the past. Of course, some men did their relaxing in the pub on the way home while their wives made dinner, for instance. The inequality between the genders applied just as strongly in this area as in any other.

Nonetheless, the fabrication of a link between boozing and relaxing has implications for women as well as for men.

A recent article by Amelia Hill in the Guardian about her “dirty little secret”, namely that she has given up drinking without being an alcoholic, made the point that the promotion of drinking is especially directed towards women, including mothers.

We have such cheery concepts as “wine o’clock”, which help to underline the idea that if you don’t have a glass of wine in your hand, you’re not actually relaxing. She quotes the slogan: “You’re not really drinking alone if your kids are home.”

It’s funny and smart and clever, but it is all part of the message that if you’re stressed you deserve to relax even if – well, especially if – you’re a mother. How do we relax? By drinking a “glass” of wine. Therefore, if you’re a mother you deserve a “glass” of wine. (I’ve put “glass” in quotes because generally speaking, in my experience, glasses travel in company. One is followed by another and so on.)

The idea of linking drinking and motherhood would seem weird if it hadn’t been made so normal. But the link has been made and I have no doubt it has had a strong effect on the behaviour of men and women.

I was interested to read on the Alcohol Ireland website that a study of women who attended the Coombe Women’s Hospital found that almost two-thirds of the 43,000 women surveyed said they drank alcohol during their pregnancy. The developing foetus cannot cope with alcohol and drinking during pregnancy can contribute to foetal alcohol syndrome, which can result in a learning disability, poor academic achievement and other health and social issues.

Aside from that, I don’t really care personally whether people drink a lot or a little. And some of my own most pleasant memories (before I experimentally stopped drinking four years ago) are of that first wine or beer in the evening. But when you say relaxation equals alcohol, you are invading people’s mindsets in ways that can have serious consequences. It’s far less insidious to acknowledge that you drink to get an alcohol hit than to pretend that without it nobody can really relax.

You could say that mothers drinking during pregnancy are behaving irresponsibly and I guess they are but I don’t think irresponsibility is the prime factor. I think it’s the false credit we give alcohol as a necessary ingredient in the good life.

If we want to do something about the financial, health and social costs of alcohol then the first thing we need to do is to challenge that fake cultural idea, an idea that works exclusively in the interests of the drinks industry.