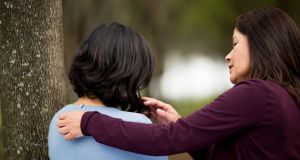 I’ve kept this secret all these years because I wanted to protect her. I didn’t want her to feel rejected and know he has walked and driven past her for years and that he lives in the area – along with her siblings. Photograph: iStock

Question: Sixteen years ago, when I was 18, and to be honest at a lonely, hard time in my life, I kind of struck up a friendship with an older man who was already in a relationship. We’d talk about the problems I was having in my personal life and he shared some things he’d gone through. As a result, I fell for him and we had a one-night stand.

It didn’t feel right so it didn’t happen again after that. A couple of weeks later I found out I was pregnant. He said he wasn’t in a position to be there. I didn’t want to break up a family and I felt very guilty. I told him I was happy to raise the baby myself. The first couple of years were quite hard – he and his family often passed us in the street, oblivious to it all.

I met my partner 14 years ago. He’s been an amazing stepdad to my daughter, but, since her early teens, she’s really struggled with not knowing her biological father. She’s been in counselling and has self-harmed and I’m so worried about her and the impact it’s having on her mental health and it’s breaking my heart. I’ve kept this secret all these years because I wanted to protect her. I didn’t want her to feel rejected and know he has walked and driven past her for years and that he lives in the area – along with her siblings. When I sit with her crying her eyes out it destroys me.

I thought I was protecting her, but it feels like the only one being protected now is him (and his family), but that can’t be just on me. If it was to come out I don’t know if she could handle it mentally as she’s worn out, but I’ve recently found out he’s terminally ill so I need to make a decision sooner rather than later. I honestly don’t know what to do for the best.

Answer: Your daughter has a right to know who her biological father is and it seems that time is running out for a possible meeting to happen. In other circumstances, both she and he would have time to prepare for such a meeting, but you may have to forgo this given the circumstances. Your daughter has been loved and protected all her life and she has a very good stepfather and she will be well supported in every step of this disclosure. It is very fortunate that your daughter has had counselling but this situation might require some support for you too, as you are central to orchestrating this meeting.

A family therapist would be in a position to see you either as an individual or any combination of people who might be struggling with this disclosure – including your daughter’s father and/or your own partner. Initially, you will need to speak separately to your daughter and her birth father. Tell your daughter that she was born out of love and answer any questions she has as honestly as possible. It would be a good idea to organise a counselling session for her as close as possible to this disclosure as she may struggle with powerful emotions on the discovery of how close she has been to her birth father all along. She may feel angry and betrayed and you will need a lot of support to handle this so it is really important that you stay calm and open for her. She may need to rail against you but hopefully while knowing that you love her enough to tolerate whatever she throws at you.

You will also need to talk to her birth father on his own to tell him that his daughter will know who he is. You are not offering him the option of further secrets but he may need time to consider if he will let his own family know or not at this point. Your daughter has a right to let her half-siblings know of her existence, but that may need to come at a later stage.

If she wants to meet her birth father, a case has to be made to him to allow this to happen and you are the person to propose this. Of course, he may refuse and as he is very ill, he may not be very able to respond to this crisis. It would be best to speak to him and then give him time to consider his response and perhaps organise to meet again in a few days. You do not need his agreement to tell your daughter of her origins and he will need to factor this into his decision.

You have shown great resilience in the past, rearing a child on your own, and this resilience is needed again now so draw in as much support for yourself as you can: your wellbeing is central to coming through this crisis.

We’ve discovered our bathroom has no foundations. What should we do?
7

Michael Harding: One day I couldn’t walk back up to the house
8