Yoga with dogs? Yes it is barking mad

For those who feel awkward and Lycra-lumpy in yoga classes, try doga 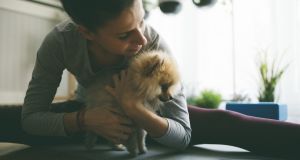 Doga is a system of balancing dogs on the body while in yoga poses. Photograph: iStock

A Belgian shepherd has got snappy with a chow chow, chasing it between the mats. Ten other dogs erupt, like schoolboys egging on a punch-up. Things cannot be going to plan, if there even is a plan.

The teacher gamely attempts to continue, but I can’t hear what she’s saying. Taking advantage of the mayhem, a bichon frise is truffling in everyone’s bags, looking for rawhide twists.

I should explain: I’m in a dog yoga class. Maybe that makes things more confusing.

Doga is a system of balancing dogs on the body while in yoga poses. (“If you have a larger dog, use him as a bolster,” says the instructor.) On paper, it is an idea so nauseating it would make Anthea Turner want to declare a fatwa. Designed to nurture a dog’s sacred bond with its owner, it came from California; hard to believe. According to our teacher, doga pioneer Mahny Djahanguiri, it’s particularly good for rescues. An owner practising slow and sustained breathing will calm down an anxious animal, whose parasympathetic nervous system will respond in kind. This does sound plausible.

Someone should tell the dogs.

Thankfully, the class is open to non-owners, too – those who just want to hang with some mutts. A mat neighbour lends me her miniature sheltie, and I spend a few minutes hinged at the waist, clutching the impeccably manicured beast, trying not to drip sweat on to it. Extending into warrior pose, I hoist the dog like Rafiki lifting Simba at the start of The Lion King. I don’t know whether the sheltie is loving or merely tolerating this, the way my childhood dog did when I put stickers on him. But the fur is very reassuring.

Doga is undoubtedly crackers, but it’s my kind of crackers. I’ve never succeeded in getting into straight yoga, and our society’s obsession with it baffles me. Yoga is an ascetic means of preparing the body for meditation. It’s about unifying with the divine, not looking buff in Lululemon. I mean, imagine if all the Hindus in Uttar Pradesh were shovelling down communion wafers as a low-cal alternative to crisps. That would be weird.

Themed yoga should be even more of an aberration. Beer yoga, Harry Potter yoga, horse and goat yoga. What the hell are these? Broga, a fitness programme taught “from a man’s point of view”, replaces asanas with names such as “rock star” and “chill out pose”. A friend of mine swears by Stevie Nicks yoga, where a chiffon-clad instructor replaces devotional mantras with Fleetwood Mac lyrics. The (inaccurate) message is that yoga is fun, secular and customisable: you can go your own way.

The thing is, in every other yoga class I feel awkward, Lycra-lumpy, alienated by some Blake Lively-alike telling me I am more than enough. The involvement of dogs changes everything. It’s impossible to feel self-conscious in the presence of a boston terrier curious as to why you are trying to turn into a bridge. Dogs puncture the absurdity of all human behaviours. Have you ever tried sinking into shavasana while a pomeranian puts its tongue in your ear? Ohm. Ohhhhm. Ohhhmmygod, is that piss on the floor? (Downside: there was quite a lot of piss. Not sure who to blame, but the bichon was looking sheepish.)

Forget the rescue animals – at the end of the class, I feel calmer, centred and in the moment. That parasympathetic works both ways. A meeting with God may be elusive, but dogs will never let you down. When it comes to reasons to feel #blessed, they are definitely more than enough. Doga without the dogma: that’s my vibe.

John Malone: The US billionaire buying up Ireland