‘I’ve met a really kind, attractive man but I’ve noticed he used to be skinnier’ 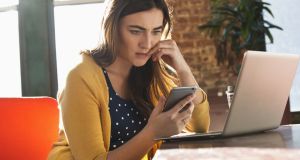 “I’ve never liked someone so much emotionally, but is there really a future if my heart doesn’t jump at the sight of him?” Photograph: iStock

I met a man so kind that I can’t believe he’s real. We’ve gone on five dates so far. I was insanely attracted to him physically and emotionally at the start. Between our second and third date there was a two-week gap where we genuinely couldn’t see one another, but we texted every day.

I looked at his photos online a couple of times during that gap and it turns out that I’d never really noticed that he was overweight in person until I saw photos of him from a year or so ago when he was a few stone lighter. I feel awful about it, but I think I fancy him a lot less now. We’ve gone out a couple of more times since. I’ve never liked someone so much emotionally, but is there really a future if my heart doesn’t jump at the sight of him?

Let’s get this out of the way: to everyone who has ever had an online dating profile, please keep your photos recent and accurate – or at least date them in the caption.

“Flattering but generally accurate selfie, 2018.” “Group shot to prove that I have friends, 2016.” “Photo of me posing with a drugged and abused tiger that should always result in a left-swipe, 2011.” “Carefree at a college party before the crushing weight of adulthood gave me wrinkles and a tonne of emotional baggage, 2007.”

This is not because anyone should be ashamed of getting older, or gaining a bit of weight, or losing some hair, or whatever the differences in these photos might show. On the contrary, it’s to ensure that when you end up on a date, you know the person you’re out with thinks you are attractive, just how you are – or at least doesn’t think anything you have to offer physically is a deal-breaker – so that you can relax and feel confident.

But that’s a tangential issue. The real underlying issue here is the illusion of choice, and how it can mess with our priorities.

This problem of choice is one that has been recognised by psychologist Barry Schwartz, who observed that an over-abundance of choice in retail settings actually increased anxiety in consumers. He called this the Paradox of Choice, arguing that too many choices makes us second-guess ourselves and lose sight of what we truly want, while having only one or two potential options encourages us to make the most of whatever it is.

For many people, online dating can foster the same predicament due to the seemingly endless options. The buffet of potential dates available to us in just the tap of an app can dissuade us from committing to one person because we fear that in so doing, we risk missing out on something “better”. Due to the focus on photos in online dating, this often just means “better-looking” not “better potential partner” – which we all know is not the same thing.

But still we enter an objectifying mindset where we endlessly compare and contrast, dismissing wonderful people just because the person in the next profile has slightly more flattering photos.

What I find fascinating about your dilemma is that you’ve gone a step further – you’ve created a choice where there is none. On your first and second date you not only enjoyed this man’s company immensely, you were also “insanely attracted to him physically”. But by looking at his profile and old photos, you created a choice between the Real Him you’ve actually met and clicked with and were really happy with – and an Alternate, “Better” Him who is a bit skinnier. And because you prefer the appearance of Alternate Him, you are now devaluing Real Him through this comparison.

Alternate Him isn’t better. And he’s not an option. On the other hand, the Real Him – the him who has taken you out on five fantastic dates, who you did find insanely attractive and who is kind (kind! One of the most important yet underrated traits in any potential partner!) – is an option. An option you’re about to screw up by being shallow and choice-spoiled.

My advice to you is the same advice I’d give to anyone who has found someone they really click with, but who remains tormented by the spectre of other options: stop considering other options for now, to give yourself a chance to focus on what is real and in front of you. Commit to at least giving this person a fighting chance.

Start thinking about what you value in a person – their adherence to an arbitrary, weight-based standard of attractiveness that makes them competitive in a photo competition, or their personality, kindness, emotional intelligence and potential to be a great romantic partner?

Decide quickly. There are loads of women who know which is more important, and who would love to make this great-sounding guy a priority, not an option.

Roe McDermott is a writer and Fulbright scholar with an MA in sexuality studies from San Francisco State University. She is researching a PhD in gendered and sexual citizenship at the Open University and Oxford

Is this the ‘best ever Paul Henry landscape’?
5

Meet Ireland’s new farmers: ‘People laughed at us when we started growing snails’
8

Paul Flynn: A wonderfully easy and logical way to feed your family
9