The changing epidemiology of hepatitis B in Ireland 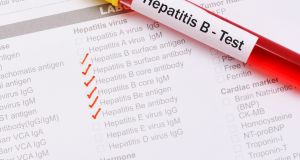 Guidelines in Ireland drawn up in 2015 recommend that HBV testing should be undertaken on both new immigrants from countries with a HBV prevalence of 2 per cent or greater and on immigrant women attending antenatal clinics. Photograph: iStock

Primary HBV infection may be unaccompanied by symptoms or may result in acute hepatitis, which has a mortality rate of between 0.2 per cent and 2 per cent. The primary infection is often cleared, but a chronic infection will arise in about 5 per cent of adults.

Although many chronically infected individuals have no symptoms, they constitute the main reservoir from which susceptible hosts become infected. According to the World Health Organisation, worldwide about 257 million people are living with HBV infection, and in 2015 there were 887,000 deaths from hepatitis B, mostly from complications, including cirrhosis and liver cancer. There is an effective vaccine available.

Hepatitis B prevalence is highest in Africa and Asia (6.2 per cent and 6.1 per cent, respectively). Ireland, by comparison, is a low-prevalence country with a population prevalence of between 0.01 per cent and 0.4 per cent. However, a recently published study in the Irish Journal of Medical Science shows the epidemiology of hepatitis B in Ireland is changing. In a report entitled “Epidemiology of chronic hepatitis B virus in Ireland using routinely collected surveillance and administrative data, 2004-2014”, Dr Caroline E van Gemert and colleagues state “the epidemiology of HBV in Ireland mirrors immigration patterns and notifications for chronic HBV infection may increase due to a recent increase in migration of people from countries with intermediate and high HBV prevalence.”

Acknowledging a shortage of data on chronic HBV infection both in the general population and at-risk groups in Ireland, the researchers evaluated data on HBV surveillance, hospital discharges, liver cancer, mortality and immigration for the years 2004-2014.

In total, 7,463 notifications of HBV infection were made between 2004 and 2014, with 91 per cent of cases designated chronic; and in 2008 the notification rate of chronic HBV per 100,000 peaked at 17.2, but fell to 8.5 per 100,000 in 2013. By contrast, there has been an increase in recent years of hospital discharges, new cancer registrations, deaths from primary liver cancer and hospital discharges from cirrhosis. “[T]his increase,” say the researchers, “may be partially attributable to immigrants who have been infected with HBV for several decades.”

In an age of mobile populations, the challenge of how to best address the problem of HBV infection in certain migrant groups is being met in different ways. For example, last year in the journal Travel Medicine and Infectious Disease, Libyan researchers described the “Epidemiology of hepatitis B virus in immigrants crossing to Europe from North and Sub-Saharan Africa”. Of 14,205 individuals assembling in Libya prior to attempting a sea crossing to Europe, evidence of HBV infection was found in 16.4 per cent from the Horn of Africa, followed by 12.7 per cent among those from central Africa.

This high HBV prevalence represents virus spread in countries of origin, but the Libyan researchers suggest it could also influence the status of HBV in Libya and European destination countries. Noting that none of the migrants in their study had received HBV vaccine, they believe that “extending HBV [vaccination] to this risk group should be considered a moral duty of the governments of all countries.”

Guidelines in Ireland drawn up in 2015 recommend that HBV testing should be undertaken on both new immigrants from countries with a HBV prevalence of 2 per cent or greater and on immigrant women attending antenatal clinics; that non-immune immigrants should be vaccinated; and that those with HBV should be referred to specialists. However, Dr van Gemert and colleagues point out that prior to 2015, guidelines in Ireland for infectious disease screening of immigrants were aimed solely at asylum seekers. Yet despite the public health cost-effectiveness of HBV screening, “there are inconsistent data on the level of screening among asylum seekers in Ireland with screening rates between 52 per cent and 73 per cent being reported.”

We are part of a shifting public health landscape and it is clear that the mass movement of populations across the globe will influence the epidemiology of many infectious diseases. The extent to which these diseases will impinge on Ireland’s public health will be determined by the actions taken on our behalf by the Government. In relation to hepatitis B, van Gemert et al have identified a need for improved HBV screening to help reduce future morbidity and mortality.

And if this need is not met?

The researchers are clear: “Without a co-ordinated screening programme for priority populations, particularly for immigrants and asylum seekers from high-prevalence countries, it is likely that hospitalisations and deaths from HBV-attributable cirrhosis and hepatocellular carcinoma will continue to rise, with considerable associated public-health expense.”

It is a warning that cannot be ignored.