Agony and Ecstasy: Psychedelics as the next big health remedy?

With reports of mind-altering drugs aiding recovery from post-traumatic stress and helping smokers quit the habit, the case for psychedelics is gathering force 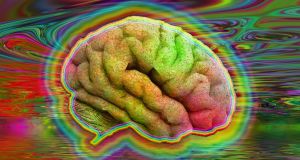 Much of the early clinical use of LSD involved it being used to help people with problems such as alcoholism, drug addiction and depression. Photograph: iStock

In Ireland, our national groove often suggests that things never change, or else they change at an almost-bewildering pace.

But even the speedy changes take more time than we recognise, so while we see the wave breaking, we don’t see the wave building out at sea, out of sight.

But one wave, which has potentially enormous consequences for our healthcare systems and, in particular, for how we deal with food and eating disorders, has already begun to build, just out of sight.

I’m referring to psychedelics. In May, The Irish Times ran a story headlined: ‘Ecstasy drug may help people recover from traumatic experiences.” The story described a US study in which 26 soldiers, firefighters and police officers, who had been diagnosed with PTSD (post-traumatic stress disorder) had been treated with MDMA – the main active constituent of Ecstasy – in conjunction with psychotherapy sessions. At the conclusion of the trial, 16 of the 26 participants were so improved that they no longer met the diagnostic definition of PTSD.

The New York Times also ran with the story, with the more opaque headline: “Ecstasy as a remedy for PTSD? You probably have some questions.”

Well, yes, but not the questions you might imagine.

Because the real question is this. Why are serious newspapers reporting experimental research projects, normally the subject of peer-reviewed papers published in The Lancet, involving drugs that are classified as illegal?

The answer is simple – the wave that sees psychedelics as a force for good, and as an important potential ally in our healthcare systems, has begun to build.

It started in 2010 when it was reported that researchers in three different locations in the US had begun to use doses of psilocybin – the active compound in magic mushrooms – to help dying patients cope with the existential fear of death.

With the help of a medical team to direct the experience, researchers reported that the psilocybin helped the dying patients to experience a happy death. They became reconciled to their fate largely thanks to psychedelic experiences under the influence of the drug.

The curious thing about this, as Michael Pollan reports in his excellent new book, How To Change Your Mind, is that none of it is new.

After the Swiss chemist Albert Hoffmann accidentally isolated the psycoactive molecule that came to be known as LSD (lysergic acid diethylamide) and, in 1943, took the world’s first LSD trip, scientists and doctors saw an important clinical role for LSD. The public imagination may associate LSD with hippies tripping in Haight Ashbury 50 years ago, but there is another, serious and sober, side to the psychedelic story.

Michael Pollan tells the whole story of psychedelics extremely well, and his book is an irresistible blend of history, research and personal experience. In terms of the psychedelic wave, the book is the big kahuna, the Big Bang moment for a movement that is gathering force across the planet.

But what has this to do with food and eating and wellbeing? Well, much of the early clinical use of LSD involved it being used to help people with problems such as alcoholism, drug addiction and depression.

David Kessler, the former head of the US Food and Drug Administration, has coined the term “capture” to describe the common mechanisms underlying addiction, obsession, mania, and depression. Kessler sees these as involving learned habits of negative thinking and behaviour.

It seems to me that issues such as anorexia, bulimia and over-eating fall into this category of “capture”, and that psychedelics may be a way for sufferers to reboot their brains, to get out of the rut of negative thinking and behaviour that ruins their lives.

Pollan describes experiments where addicted smokers were given psychedelics in an attempt to wean them off tobacco. He quotes one former smoker, Charles Bessant, who told him: “Why quit smoking? Because I found it irrelevant. Because other things had become so much more important.”

Interestingly, Savannah Miller, another smoker who underwent the experiments, had an epiphany during the treatment, and told her guides to write it down because it was so important. She told them: “Eat right. Exercise. Stretch.”

So, could psychedelics change the groove of our health services? Is there enough of a wave for people – particularly medical practitioners and politicians – to catch?

It’s worth recalling that when one of the UK’s leading researchers on the subject, Prof David Nutt, said on television that LSD was less harmful than alcohol, he was promptly sacked from his post as chair of the government’s Advisory Council on the Misuse of Drugs.

As ever, we can expect the standard denunciations from the usual suspects – the politicians, the medical establishment, the clergy, the country’s drug dealers.

But I suspect that they are missing the point.

And missing the wave.

– John McKenna is author of Ireland The Best