The life of Mamils: why middle-aged men love cycling . . . and lycra

Cycling has grown in popularity in recent years – it’s free, healthy and kind to aging joints 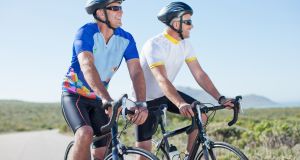 Cycling has taken off in a big way in recent years – no longer is the golf club membership an essential for networking or male bonding sessions. Photograph: iStock

Picture this . . . the alarm goes off on a Saturday morning, Freddie Mercury can be heard screaming “bicycle” at the top of his lungs as the man exits the bed, stumbling towards the wardrobe.

He doesn’t reach for his golfing breaches, nor his gardening attire, he grabs his shiniest, tightest (and sometimes unfortunately whitest) lycra and pulls it on without hesitation. He grabs his helmet and bike shoes and heads to the garage (or spare room depending on how understanding his household are of his obsession) and carefully retrieves the item known to reduce any college funds and holiday budgets – his bike.

Hopping up on it, adjusting watch settings, bike computer settings and the all-important setting of the padded pants, the “Mamil” emerges out on to the road to his freedom.

Cycling has taken off in a big way in recent years – no longer is the golf club membership an essential for networking or male bonding sessions. Green fees are being spent on expensive bikes and the 19th hole is being replaced by a coffee and scone (cyclist staple) at a country cafe. What exactly is the attraction to the sport that men look so, well . . . unattractive? I should point out at this stage I’m their female counterpart who looks no better in her Saturday finery. I caught up with my fellow lycra-clad friends to ask what motivates them to throw their leg over every weekend?

“Secretly we think we look good in lycra even though people point and laugh, it’s got to be the least flattering thing as you get a bit older and heavier,” says Mark Loughran, who took up cycling when he was in his early 30s. Now hitting half a century, he’s still competing in races with no sign of slowing down and is an integral part of the Bray Wheelers cycle club. “It’s funny, when you are with a club you are just not conscious of it at all because you are out with your friends but as soon as you go somewhere else you’re like ‘on yeah I’m just wearing lycra shorts’ it’s pretty embarrassing.”

His fellow Bray Wheeler David Healy used to cycle when he was younger but it wasn’t until his late 30s that he revisited the sport again. “I did try golf but I think the biggest issue I had with golf is in order to get good I needed to invest so much time not only on the golf course but with lessons.

“The bike-to-work scheme was what introduced me to cycling again – that then transitioned to four or five years of cycling and really enjoying it. The thing with cycling is you can just hop on the bike, train, enjoy it and get results relatively quickly, it’s free as well. I enjoy sports that are aggressive and make me want to work and cycling has that ability, you can take it to whatever level you wish.”

Due to the low impact, on the joints, cycling can be appealing to those who are carrying some excess weight or are trying to keep active during an injury. Steven Cautley owns Cycleplus, a cycle shop in Greystones, Co Wicklow, and has seen his fair share of beginner cyclists starting the sport in mid to later life and has noticed an increased number of post-op newbiess: “Cycle to work opened up a lot of people’s eyes to the fact that they could get a bike, commute around, go down to the shops, go out for a quick spin – it’s great fitness aerobically. I would get a lot of people with hip and knee replacements, people being sent in to get bikes because of the low impact but also the fact that if you keep these joints moving they keep themselves lubricated – it’s kind of use it or lose it.”

Cycleplus also runs a group cycle from the shop on a Wednesday morning, bringing on many an enthused customer, including John Tighe. “I bought a bike on the bike-to-work scheme in Cycleplus, my ambition was to bike to work 17km. After a while, Wayne asked me if I wanted to go cycle with them on a Wednesday group cycle, didn’t know what it was, was off the back [of the group] all the time – after a year or so I got the bug and joined the Bray Wheelers. What I find about cycling is it crosses all boundaries – we have barristers, solicitors, people that own pubs, and bus drivers like myself, there’s no social barriers there as such. They are from every walk of life, I mean where else are you going to get that?”

If this is getting you motivated to go cycling, with added Lyrca, this week is Bike Week so there are organised activities all around the country.

A plantar fasciitis injury led Jim O’Donnell to get back on the bike. With an old bike in the garage, he just needed the get up and go to get on it and take to the road with a few of his fellow Cahir Meet and Train running buddies. The idea took off and a new bike was sought. “I was playing golf at the time,” says O’Donnell, “but the few lads that I was playing with, one got injured and the other two stopped coming to the course to play – it was costing around €700 a year [membership]so I got this idea I’d invest the money in the racing bike as it was riding a hybrid. Never having had a racing bike, I went off and bought it. I had it in the garage about five weeks before I had the courage to get up on it.

“We have been called Mamils, which is a compliment in a way – if they think you are middle aged at 63 I’m looking forward to reaching 120!”