How do I tell my colleagues I’m gay?

Dear Roe: Finance worker has kept his sexuality to himself but wants that to change 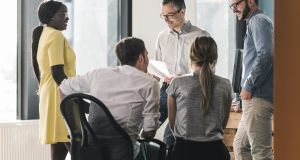 I’m a 28-year-old man working in finance and I have worked incredibly hard to get where I am. Because I’m quite young for my position, I try to always be very professional to maintain a sense of authority, and don’t speak about my personal life. Recently, a fellow employee was referred to as my workplace’s “first openly gay employee”. I’ve never specifically tried to hide the fact I’m gay, I’ve just never discussed my dating life or relationships at work. That this other man is being called the only gay employee doesn’t sit well with me, but I don’t know how to address this with my co-workers. I know they’ll all be supportive, that’s not the concern. It’s that after not revealing much about myself, I literally don’t know how to tell them. Any advice?

Before you decide to tell people at work that you are gay – which I’m all in support of – it’s worth asking yourself why you want them to know. If this other employee is being celebrated and supported in a way you would appreciate, either socially or professionally in terms of diversity programmes or opportunities, that makes all the sense in the world. If it’s also troubling you that you are “straight-passing” and therefore it feels like an important part of your identity is being overlooked, that’s also valid and important for your sense of self to want to be acknowledged.

However if before this declaration about your co-worker being the only gay person in the office, you were fine revealing nothing about your personal life, don’t feel under pressure to suddenly alter a mode of operating that makes you feel comfortable and safe.

If you do want to come out to your co-workers, don’t worry too much about it. Being “openly gay” in a supportive workplace isn’t hard. You just tell someone. Literally one person, if they’re even a bit gossipy, word will spread because humans are nosy creatures. A formal meeting and declaration isn’t necessary; just work it into conversation in the lift. (I hope your sense of professionalism doesn’t mean you literally never say hello to people.) Tell a co-worker that you and your boyfriend, or the guy you’re dating, are heading out and ask for a restaurant recommendation. When sharing what you did on the weekend, mention you went to a bar people would recognise as a gay bar. If someone mentions they saw a film with an actor you fancy, share that nugget.

LGBTQ people are often discouraged from ever mentioning their gender identity or sexuality, and the excuse of “maintaining professional boundaries” is a common way of silencing them. What this ignores is heterosexual privilege, and that straight people constantly address their sexuality and gender in ways that go unnoticed – and they are never punished for it.

For example, Matt Damon, a prime example of straight white men who should listen before they speak, once gave an interview where he implied that gay actors should conceal their sexuality.

“I think you’re a better actor the less people know about you, period,” he said. “And sexuality is a huge part of that. Whether you’re straight or gay, people shouldn’t know anything about your sexuality because that’s one of the mysteries that you should be able to play.”

Damon has four children with wife Luciana Barroso, and I know this because he talks about them constantly in interviews. And yet he doesn’t see that as revealing his sexuality. Because Damon, and a sadly large portion of society, think being heterosexual is the default, and so they literally don’t even notice the amount of times straight people mention their dates, partners, celebrity crushes, etc. Essentially, straight people are outing themselves constantly, casually, confidently. But when a gay person mentions their partner once, ignorant bigoted people register this – and if it happens more than once, it is seen as “the gay agenda” being shoved down their throats.

This is their problem; their ignorance to unlearn, their bigotry to address. So as long as you know you are literally safe, and you genuinely believe your workplace is a supportive space, don’t cater to those attitudes. Feel as comfortable speaking about your life as straight people do.

You may even inspire others. Your co-worker may be the only openly gay person in your office, but that doesn’t mean there aren’t other LGBTQ people in your workplace who, deliberately or not, aren’t “out” at work, just like yourself. By speaking about your life casually and confidently, you may give them the courage to do so too.

Indeed, the easiest option may be to talk about this situation with your gay co-worker. Thank him for coming out and making that an easier task for future employees, because that was a great thing for him to do, and then laugh about how you’re both managing to disrupt that aggressive straight agenda. It needs it.

Two to savour: A German Riesling and an Austrian Zweigelt, each for less than €8
4