‘How can my own country put a price on the lives of rare disease sufferers?’

When a cure is found for Friedreich’s ataxia, will I face the long campaign to access treatment funding endured by other people with rare diseases? 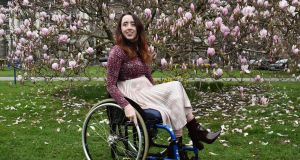 Niamh: “I am left wondering if, when a treatment is finally made available for FA, we will have to campaign for more than two years to secure funding to be able to avail of the treatment.” Photograph: Niamh Barry

I was diagnosed with Friedreich’s ataxia about 10 years ago when I was 13. FA is a progressive neuromuscular disease, for which there is currently no cure.

Recently, I’ve started to wonder what will happen when a treatment is found.

I began researching rare diseases in Ireland and their treatments. The case of Orkambi, a drug used to treat cystic fibrosis patients, and Spinraza, a drug used to stop the progression of spinal muscular atrophy, were two of the most high-profile examples of this in Ireland.

Both of these drugs gained all necessary approval and entered the markets, but were not funded by the HSE, and thus too expensive for patients.

In Ireland, the job of the HSE’s National Centre for Pharmacoeconomics (NCPE), is to review new drugs that have met EU safety standards and then decide whether or not to fund the treatment for Irish citizens.

In 2016, the pharmaceutical company Vertex completed its trials of Orkambi, but the drug was not funded until last year by the HSE because of the high buying price

In many cases, the HSE decides the price is just too high and it isn’t in the position to fund the costly treatment for Irish patients. Following this decision, patients of rare diseases are usually forced to campaign for funding themselves.

In 2016, the pharmaceutical company Vertex completed its trials of Orkambi, but the drug was not funded until last year by the HSE because of the high buying price. The National Health Service in the UK has still not funded the drug for British cystic fibrosis patients.

Cystic fibrosis has a prevalence in Ireland of seven in every 10,000, with more than 1,300 patients in Ireland. Friedreich’s ataxia affects one in 25,000-30,000, with fewer than 200 patients in Ireland with the disease. FA is an incredibly rare disease, and so I have to wonder whether or not the HSE and the NCPE will deem funding a treatment “cost-effective” for such a small group of people.

Spinraza suffered a similar battle, but finally received funding earlier this year after a considerable campaign waged by SMA sufferers and their families.

Not wanting to face a similar fight when a treatment for FA is found, I began to look for answers and assurance just a few weeks ago. Since then, I have had very productive conversations with many TDs, and I’ve been invited on to a local radio station to raise awareness of the disease and the future funding of FA treatment in Ireland.

Before Orkambi received funding last year, I remember reading about how the HSE was hesitating around the point of the cost of Orkambi. How can my own country put a price on the lives of rare disease sufferers?

TDs James Lawless and Frank O’Rourke both tabled parliamentary questions to Minister for Health Simon Harris about Friedreich’s ataxia treatment. One of the questions was redirected to the HSE and I received a comprehensive answer about the current funding in place for managing patients with FA. Mr Harris is yet to comment on future funding for rare disease treatments.

Speaking to a friend and fellow disability activist, Dermot Devlin, he told me about his struggle to get funding for Vimizim, a treatment for his rare disease Mucopolysaccharide Morquio disease. “It angers me that I had to fight for it. My health suffered for it, as it took every bit I had in me to fight and be public about the bad things in my life.”

Eventually, Dermot won his battle for funding but I am left wondering if, when a treatment is finally made available for FA, we will have to campaign for more than two years to secure funding to be able to avail of the treatment.

I also think about the financial burden my working-class family would be under, having to pay for pricey treatments for both me and my younger brother, who also has FA

When I consider this, I think about how just two years ago I independently walked around, but now I depend on a wheelchair to go about my life. Where will I be in two years’ time?

I also think about the financial burden my working-class family would be under, having to pay for pricey treatments for both me and my younger brother, who also has FA.

Friedreich’s ataxia has no current cure, but I am hopeful for the future. Hopeful that a treatment will be found and hope that when it is, that we will be able to avail of the treatment without a lengthy campaign.

My hopes in writing about this are to highlight the lack of assurance that we, rare disease patients, have when it comes to future treatment funding. Hopefully, this can change before a treatment for my rare disease is found.

Do you really need to take supplements during pregnancy?
5

Ask the Expert: Our grown-up daughter is making us miserable
7

10 of the best easy cycling holidays in Europe
8

Lofty ideals: the dos and don’ts of converting your attic
10