Working out our obsession with weight loss

Getting fit at the gym doesn’t mean losing weight 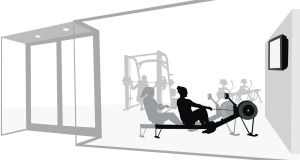 ‘I’m the exact same weight as I was when I started going to the gym and that’s the way I want it to stay.’ Image: iStock

Earlier this year I decided I needed to join the gym. With a family history of cancer and mental health problems, I knew that more exercise would be an easy way to keep myself healthy. The problem was that my motivation was severely lacking.

Like many people, the idea of returning to the gym filled me with dread. It’s silly, but there’s always a feeling when you enter a gym that strangers will come up to you to tell you that you’re doing it wrong and it would be better for everyone if you just left.

I knew that given my history of poor self-discipline, joining a gym and never actually using it had the potential to be my biggest obstacle.

Terrified by the prospect of wasting money, I put a call-out on Twitter asking people for their advice: “Someone help me. I need to start exercising given family history and for my mental health and I know the only way I’ll do this is by joining a gym but I have little to no self-discipline/motivation. How do I do this?”

Twitter, as it tends to, stepped up to the plate with a flurry of advice coming my way. Some suggested personal trainers which they felt gave them a sense of accountability while others suggested gyms where I could watch Netflix while working out. You have not lived until you’ve sweated profusely while watching Jonathan Van Ness of Queer Eye tell someone that they’re amazing sweetie.

However, among all the well-wishers, there was a tone of advice that made me incredibly uncomfortable. A couple of people who I’ve never interacted with before began advising me on the best methods to lose weight. One suggested a three-week diet plan that would lead to visible results while others started advising on exercises that would help me lose weight fast.

There it was, the assumption that because I wanted to go to the gym, I wanted or needed to lose weight

While these people felt they were being helpful, the tone of their advice puzzled me. I’d very clearly stated my reasons for wanting to exercise in my initial post. Not once had I mentioned a desire to lose weight. In fact, I’d purposely avoided mentioning it in my tweet so that I wouldn’t receive this kind of advice. Yet, there it was, the assumption that because I wanted to go to the gym, I wanted or needed to lose weight.

This subtle and nasty assumption is incredibly damaging, particularly for women. When you start going to the gym, people tend to notice and their compliments to you begin to change ever so slightly.

The “You look nice,” become “You look nice, have you lost weight?” People suddenly take an interest in the workouts you’re doing. “Cardio or strength training? How’s your progress?” Rarely have people actually asked me how the gym makes me feel or whether it’s had an impact on my anxiety. All they want to know is if I’m happy that I’ve lost any weight as if being skinnier would solve any of my problems.

This isn’t a problem unique to me either. Speaking to other women about their experiences hammers home how deep this assumption runs. One friend Ilaina told me that whenever she posts a selfie of herself at the gym on social media, friends will laud how much weight she’s lost. “People think it’s a compliment which drives me insane because there’s nothing wrong with my body.”

This obsession with weight loss feeds into the idea that women must always be losing weight if they want to be happy. So if we don’t lose weight, we feel worthless because, according to society, there’s something wrong with us. The reality is that health comes in all forms. A number on a scale tells you very little about that person standing on it.

It’s been four months since I joined the gym where I now go twice a week for 35 minutes at a time and for those 35 minutes, my head is totally clear. My core muscles are a little bit stronger, my sleep has improved and my anxiety is more manageable. My motivation has also greatly improved to the point where I yearn to get on the rowing machine, a place I thought I would never get to.

As I do only cardio-based workouts, the progress is slow but you can see signs of my improving fitness although I still do pant whenever I have to run for the bus. Some things never really change.

The best thing though is that I haven’t lost any weight at all. I’m the exact same weight as I was when I started going to the gym and that’s the way I want it to stay. As long as I’m healthy, I’m happy and that’s the way it should be.

So the next time someone tells you about their gym progress, don’t ask how much weight they’ve lost. Ask them how the gym makes them feel and the benefits it’s brought to their lives.

I guarantee they’ll thank you for it.