Fighting arts: Tell me about . . . Aikido

‘Aikido’ translates to ‘the way of harmony’ – its aim is to unify body, mind and spirit 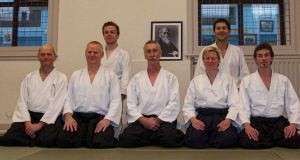 Martin Doyle is well known for his traditional Irish flute making but he can often be seen swapping his tools for his hakama. He began training in the art of Aikido in 1987 and also runs his own classes in Liscannor, Co Clare.

Where does Aikido originate?

The first martial art related to Aikido was in the 14th century, it was called Daitoryu. The founder of Aikido, Morihei Ueshiba, became an expert in this martial art and he developed it to be less aggressive. He founded his own martial art, based on it, in the early 20th century, and called it Aiki Budo and then in 1942 he changed it again to Aikido. He was from Tanabe in Japan and died in 1969. When I took it up in 1987 it seemed to be quite popular. I used to go to the dojo in Pearse Street, Dublin, where we had instructors from Japan and the UK coming over to us.

It’s very popular throughout the world because there are training centres in probably 40 or 50 countries. They have the big seminar in Japan every four years and you get representatives from all over the world. Our organisation has training dojos in Dublin, Maynooth, Kerry, Cork, Galway, Clare and Wicklow.

What is the main focus of Aikido?

They say it’s to unify the body, mind and spirit so the idea is to help a person with co-ordination. The name Aikido, if you were to translate it into English, means “the way of harmony”. It gives people confidence in connecting with other people, it also gives them a good sense of their own feeling on the planet as a person – they get a sense of balance. Because it’s a martial art, one learns to be careful dealing with other people that they don’t injure them. You learn how to stop an attack and how to restrain that person without hurting them.

There are a number of moves but there was a great Aikido sensei called Gozo Shioda who said that the trademark move, the technique which all Aikido is based on, is one called shihonage. It’s a pinning technique where if a person attacks you from one direction or another you can take that person, you can control them, you can make them lie on the floor and you have control over them completely. The other ones would have elements that are necessary in Aikido to get the understanding of how to move without using force. There is no force used in Aikido, it is a very subtle way to make contact with your partner and either throw them or pin them without using any force at all, which is a very difficult thing to achieve in a martial art, as you can imagine.

There are grading tests. When you come to a certain level of understanding you start off by doing a kyu grade, a 6th kyu, then over a period of time you can do one or two tests in a year, depending on your ability. After you get to 1st kyu then you begin your Dan grades with 1st Dan. Once you reach the level of 4th Dan all of your promotions are given to you by the organisation as they judge your physical, mental, and spiritual development. The Aikido founder was very strict in his Budo approach to Aikido, it was more like a religion than a sport and they have maintained that to this day – it’s a training programme.

The Irish Aikido Federation, Ireland Aikikai. If you go to the federation’s website you will find where all of their training facilities are, the timetables and everything else involved in it.

It also gives young people great confidence – because of the fact it’s not competitive they are being instructed how to do it correctly, it’s a learning process, you are always taking on a new element or another little piece and you keep putting all these little pieces together.

Aikido is very safe. You see, because its non competitive mostly you’ll see the people who are all instructors – they understand potential dangers when a person is conducting a beginners’ class – they will bring people through the things that will keep them safe. You learn how to take break falls, you learn how to go down on the floor without falling. In Aikido you may look very dynamic but no one is actually falling, you sit down, you may sit down very fast. The process of learning shows the person, first of all, how to be safe.

Róisín Ingle: Deck the feckin’ halls. That is an order
10