‘Two years ago, I couldn’t get out of bed to tie my shoe laces and now I’m competing in these games’

For the 38-strong Irish team preparing to take part in the World Transplant Games, their organ donors are very much on their minds 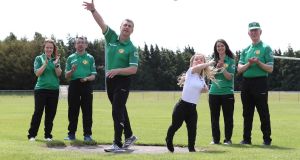 Some of the athletes who will compete at the World Transplant Games, from left: Anna Anna Pokojska, Aodhagan Cullen, Mike Keohane, Mary Fitzgerald, Rachel Eagleton and Thomas Flannery.

Participating in international sporting competitions is a nerve-wracking experience for any athlete. But, consider doing so following a serious health issue.

That will be what the 38 members of Transplant Team Ireland will do when they compete in the World Transplant Games in Newcastle, England, from August 17th-24th.

Ranging in age from 16 to 81, the team of 29 men and nine women has all had a heart, lung, liver, bone marrow or kidney transplant. And, together, they will be the largest Irish transplant team to compete in the World Transplant Games, among 2,000 participants from more than 60 countries – competing in badminton, cycling, darts, golf, petanque, squash, swimming, table tennis, ten pin bowling, tennis, mini-marathon and track and field events.

Colin White, the Transplant Team Ireland manager says while all athletes have to pass a medical test set by the World Transplant Games, there is a wide range of abilities across countries and participants. “We have some elite athletes in track, swimming and golfing events but we also have athletes who will be setting personal goals and doing their personal best at the games. The games are an opportunity for the super-fit and well-trained but they are also about inspiring people, meeting peers and being part of a wider community,” he says.

Thomas Flannery (74) is a retired Garda superintendant from Monaghan who had a lung transplant in 2016. He will compete for the first time in the track and field events (ball throw, discus, javelin, shot putt and 100 metres) at the World Transplant Games. “I’ve a background in athletics as I represented the gardaí in the masters category (over 40s) in the World Police and Fire Games in Vancouver, New York and Belfast, ” explains Flannery. Following his transplant, he went on to win the 100-metre sprint, the shot putt and the ball throw events in the European Heart and Lung Transplant Games in 2018.

Flannery says competitions motivate him to keep in good physical health. “It’s something to aim for and it encourages me to do more exercise.” The only Irish competitor in the World Transplant Games who had a lung transplant, Flannery was diagnosed with pulmonary fibrosis in 2013. His health deteriorated for two years and his medical team decided that in spite of his age and because of his fitness levels, he was a candidate for a lung transplant. “The first three months after the transplant were quite difficult but then I got stronger and fitter and more active. It took a couple of years to really be on top of things but I was very fortunate in that I didn’t have organ rejection or any infections,” explains Flannery. His wife, Cora, his two daughters, their husbands and his son will join him in Newcastle for the games.

Mick O’Shea (41) is the only Irish competitor who had a heart transplant and this is his first time to partake in competitive games since his heart transplant operation in August 2017. “The first 12 months following my transplant were tough. I had to have open heart surgery twice within two days because a clot was discovered during the transplant operation. I also had two bouts of organ rejection for which I was hospitalised but in January, 2018, I started a twice-weekly exercise programme,” he explains.

O’Shea says sport was a major part of his life before his illness and transplant so to partake in the World Transplant Games became an obvious goal for him. “I train most days: I walk six or seven kilometres one day, I cycle for 30-35 kilometres twice a week and I go to the gym the other days,” he explains. He will compete in the 10km time trial cycling event, the 30km cycling road race, the ball throw, petanque singles and 100-metre sprint.

A former electrical engineer from Mallow, Co Cork, O’Shea has also changed his career since his transplant. “I qualified as a personal training instructor in 2018 and my long-term goal is to work with transplant and cardiac patients but until I get further training, I’m working with healthy people,” he explains.

O’Shea has a positive outlook and is grateful for all the support he has received. “I’ve a lot of people to thank for where I am now but really it’s the donor family that has given me the chance to represent my country in these games. It will be an overwhelming experience to partake. And, it’s the person I’ll never know that I need to thank the most. Two years ago, I couldn’t get out of bed to tie my shoe laces and how I’m competing in these games. It’s all about where I’ve got to, not what I’ve lost,” he says.

Anna Pokojska (36) who received a kidney transplant in 2017, will be competing in the World Transplant Games for the first time this year. “I decided to compete to honour my donor and to motivate myself to stay active,” says Pokojska, who lives and works in Killarney, Co Kerry. She received a kidney transplant following six months on dialysis. “After my surgery, I was in a lot of pain. I started by taking small walks. Then, I cycled and in March, 2019, I took up running. I’ve better fitness now than I ever had and it feels great,” she explains. She will compete in the 30km cycling road race and the 5km mini-marathon.

Pokojska says meeting the Transplant Team Ireland has been a great experience. “They are very positive and active group of people. I’m not expecting to win any medals but it’s good to try something new and it will be preparation for the European Transplant and Dialysis Sports Championships in Dublin in 2020,” she says.

Jack O’Brien (16) from Navan, Co Meath, will also participate in the World Transplant Games for the first time. A former medal winner in the junior category of the British Transplant Games, he will compete in the 200-metre sprint, the long jump and darts. Born with congenital nephrotic syndrome, he became the youngest organ recipient at the age of 2 when his mother, Cassandra, donated a kidney to him when his two damaged kidneys had to be removed. “The operation worked straight away and the only thing I have to do is take medicines twice a day,” says O’Brien, who plays Gaelic Football for St Patrick’s Classical School, Navan and Navan O’Mahonys GAA Club. “GAA keeps me fit enough and I practise on the track for the sprint and long jump. I hope to win a medal,” he says.

Coronavirus: ‘you may have heard of a game called Plague Inc’
6