‘They tell you it gets easier, and maybe it does, but that stage has not visited me yet’

When I cry, my eight-year-old son tells me to think about something else . . . like unicorn poo 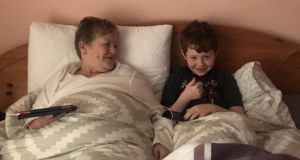 Nathan and his Nana, the weekend she passed away.

As he rolled on to his side and cuddled up to Yogi, his hand-knitted teddy bear, Nathan spied the tears welling in my eyes.

“Don’t cry Daddy, think of something else,” he said, offering a compassionate smile I thought no eight-year-old could craft. “You can adapt. I used to think of Nana and I’d cry but now I’ve adapted.”

His words drew more tears, but we quickly turned to laughter when he urged me to think of “unicorn poo . . . yeah, think of that – is that working?”

We were in a Cars-themed hotel room just minutes from Disneyland Paris, drawing the curtains on a long day of walking and eating and more walking.

The idea to visit was my mam’s, an alternative arrangement for Nathan when his classmates where making their First Communion.

She never made it.

Nor did my dad, unable to embark on the trip the pair had so looked forward to. “I’m sorry, son,” he said, “I just can’t do it without your mam.”

Paris was in May, and every other hour delivered a moment “she would have loved”.

Yogi – who my mam knitted for Nathan – stepped in for the photos and tucked Nathan in at night, but every time his face lit up, it hurt.

Mam was meant to see his every sparkling smile, to squeeze him after every excited giggle.

Last Wednesday was my mam’s first birthday since she passed in November, and life is no easier. They tell you it gets easier, and maybe it does, but that stage has not visited me yet.

Nine months on, there’s a gaping hole within and I cannot conceive what would ever fill it. I have drunk to escape, only to fall deeper. I’ve gone within myself, and cut others off. Even if I escape this hole, I don’t have her to run to.

When something good happened in life, she was who I first wanted to share it with. If something bad happened, I’d turn to her. Even now, that remains my instinct, only for the eternal reality to kick in, a cold reminder that what was surreal in November, is all too real.

I sometimes look at our text messages, the thousands of photographs and funny tales and advice and love and random questions. She was the family hard drive; a repository of memories from all our years, coded and stored for when anyone wanted access.

No one alive can replace that.

“Don’t forget salt and vinegar crisps . . . two . . . one for me, one Nathan” was the last message she sent me and I just love its simplicity and the joy found in sharing.

There’s another days before wishing me a happy birthday. “Love you more every year. X x x best son ever.” When I can’t take life, I open them and just let it all out.

Nathan and I went to my parents’ home in Ballinamore last November, just two weeks after my birthday. We arrived on Friday, made pizzas and watched movies, and on Sunday we celebrated my 41st birthday with a homemade madeira cake – a nod to the old days, with toppings by Nathan.

We smiled as she said she wasn’t sure she’d make my 21st birthday, but here we were, all smiles.

Mam stuck on an awful Christmas movie and we laughed at how she never lost her childlike love of that time of the year. We said goodbye that evening, the two of us victims of the most violent, loving hugs at the front door of the cottage, talking about Disneyland as we left.

On Monday morning, about 12 hours later, my phone rang. It was Dad. Unusual.

Selfishly, I thought I’d have to drive back up again, maybe even as far as Sligo hospital.

The tears still stream and my teeth clench as I type those words now. But on that morning I wailed, my face buried deep in my pillow. Disbelief. Anger. Pain. We were just there last night? She was in great form? H-how?

To this day, I’m not entirely certain, because I’m not able to open that conversation and I could not put my dad through it. I do know he spent an hour trying to revive her, alone in a hallway, my mam on the floor. He tells us she did not suffer, and it’s the only comforting thought I own.

Me and my sister arrived before lunch, and gripped my broken dad like we’d never done before. He was drained of tears by now, and spent much of the day in something of a stupor, exasperation washing over him with every new consolation.

I waited hours before entering her room, unwilling to confront what seemed never likely to happen.

You see, mam was diagnosed with non-Hodgkins lymphoma in 1996. When you beat the house for 23 years, you never think a losing hand is coming.

I always struggled to accept the seriousness of her initial diagnosis, something that arrived to her a year younger than I am now. Subconsciously, perhaps, I ran from the fear. To college in Galway, to work in America, to university in England, anywhere but home.

On one visit, I landed at Dublin airport and didn’t recognise her. The chemotherapy had turned her lithe, angular frame into a moon-shape, and I couldn’t suppress the tears as I embraced her awkwardly, as though she was a stranger.

She battled so bravely, and entered remission on numerous occasions. Nothing was going to end her life. Utterly illogical, of course, but I’d have taken an oath affirming my belief in her infinite resistance.

After a few hours that Monday, I entered her room, admitting life as I knew it had ceased. She looked like she was sleeping, and I willed, stupidly willed, that it was an insane prank. Then I kissed her forehead, and placed a palm on her impossibly cold hand and simply collapsed to the floor.

My dad, lost and empty, suffered a stroke on Wednesday morning, putting the funeral back until Saturday. It should have hurt, but I was now lost between disbelief and resentment, that the focus was not all hers. Dad spent the next week in hospital, missing the rescheduled ceremony, and as I helped lower down her coffin, with him an hour away, the world felt impossibly cruel.

Dad recovered, slowly, and in December we laughed as small Christmas packages arrived on a daily basis – mam’s gifts for the grandchildren arriving even after she departed. My new niece, Féile, arrived in February, and there was a babygro there for her from Nana that will be protected like haute couture. A photoshoot welcomed the newest member to the family, but it still hurts too much to look at, the beautiful addition only making the absence more evident.

I think of the memories that won’t be made, the life experiences she won’t share. It’s only since the arrival of grandchildren have I truly experienced the power of sharing those moments. They are all we have and all we need.

We visited the graveyard last week, but mam’s not there. She’s not lying beneath that cross, that’s just where the body rests that carried her wonderful soul, a body that also delivered so much pain.

Where she is, is in me, my dad, my sister, Nathan, Síog, Déaglán and Féile, and everyone who got close to her.

I’ve learned little this past while, but one thing seems true – everything you are is what you leave behind in others.

John Wilson: Four cracking Christmas wines from Dunnes, each for €14 or less
4