The problem with giving up alcohol for a month? It’s ridiculously good

I’ve just done Dry July. It’s had such an impact I think I can do without Alcohol August 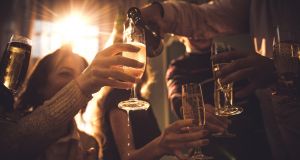 Party people: If I’m honest, what I missed most is that feeling 30 minutes or so after the first drink. The feeling of bliss, when problems float away. Photograph: E+/iStock/Getty

Now what? I have given up alcohol for a month. That’s nothing special. Thousands of people do Dry July or Feb Fast or some random month. But it is a big thing. I hadn’t had 30 days off alcohol my entire adult life.

The reason I thought it was a good idea isn’t unique either. It’s boringly familiar. I’m middle aged, and, after drinking modestly for decades, it had crept up. One glass of wine a night became two, and then three and – no point in skirting around the facts here – too often it was a bottle, sometimes more. Occasionally, if I was particularly anxious, I’d buy a bottle of wine during the day and drink the lot.

There’s shame in even writing that, but it’s true. Over the past few years my husband and I had countless discussions and a few raging arguments about cutting back alcohol, and we tried the obligatory “alcohol-free nights”. But in the jargon of the online crowd experimenting with the previously unthinkable, I was “sober curious”.

Feeling slow or a little sad in the mornings was so normal I barely noticed it. Work was interesting but lacked ambition. I avoided people

One of my main worries was what on earth I would do in the evenings. Drinking was what I “did” – preferably alone in my head or watching some Netflix show or offering random opinions on Twitter.

Feeling slow or a little sad in the mornings was so normal I barely noticed it. Work was interesting but lacked ambition. I avoided people, not especially enjoying everyday things like going for a walk, or a seeing a movie, or meeting friends for lunch. It took me a few years to grasp it, but alcohol was controlling my life to an extent that I found it hard to hide, even to myself. I had watched my father commit the slow suicide of the middle class, slumped drunk in front of the television. I had contempt for him at the time, and I was becoming him.

Every person is different. Jill Stark was a young single woman when she wrote High Sobriety, and her tussle with alcohol was about social binge drinking.

I have friends with demanding jobs raising young children alone, and they really, really feel like a drink after all-day play dates.

I often quoted Hemingway: “I drink to make other people more interesting.” But it wasn’t true. I drank to pretend that my life was more interesting than it was, to escape from everyday problems, and because I enjoyed it. Or maybe that’s self-justifying crap. Maybe it’s just that alcohol is an addictive substance like all of those illicit drugs we demonise and, over the years, I had become addicted.

So now what? The problem with giving up alcohol for a month is that it’s ridiculously, unexpectedly good. I had entirely novel experiences. Like meeting friends for a drink before the theatre and not drinking. Like not drinking on a Friday night. Like going to a family lunch and sipping mineral water. Like going to a book launch and standing around for an hour without drinking the warm, cheap white wine.

The month wasn’t entirely alcohol free. I drank one night, on Monday, July 15th. It was the day my healthy, vibrant, full-of-life mother, out of the blue, was diagnosed with a very serious illness. My first thought was automatic – “I need a drink” – and I drank a bottle of red wine, feeling overwhelmed by sadness, trawling the internet to read up on the disease, and anticipating the worst about how my family would emotionally cope.

But what happened the next day was, for me, astonishing. I had a slightly hung-over thought: “Drinking won’t help. It won’t help me, and it won’t help mum. Drinking will make things worse.” I had never had such a thought in my life.

I was more mentally available for friends and family, a better listener, less swift to judge. I ate better, exercised more. I slept like a baby, no longer waking up feeling foggy. I was a happier person

There is a sense of achievement in doing something you weren’t quite sure you could do, even something as modest as giving up booze for a month. But I wasn’t expecting the scale and scope of its impact. After two weeks or so I posted on my Facebook page: “Have discovered (a bit of a surprise to be honest) am a better, kinder, more present, more energetic, more productive, happier person when I don’t drink. What a bummer!”

I was only going to give up for one month, but these things were hard to dismiss. I was more mentally available for friends and family, a better listener, less swift to judge. I was more productive, and the stir of ambition returned. I ate better, exercised more. I slept like a baby, no longer waking up feeling foggy. I was a happier person.

As an over-researcher, I read countless articles and several books. Alcohol is a toxic, addictive substance that our body works hard to expel. That’s it. I’m not preaching, but it’s the truth, and we all kind of know it. It’s so ubiquitous, so glamorised in popular culture, so cleverly advertised, that we’re in communal denial, although that seems to be slowly changing.

It’s difficult to argue with the largest and most detailed research into the global impact of alcohol, which found that the idea that “moderate drinking” was harmless or even beneficial was a myth (one that the alcohol industry promotes relentlessly).

The more you drink, the worse the risks, but even occasional drinking is bad for you. Alcohol causes several forms of cancer and increases your risk of hypertension and cardiovascular disease. Its role in violence is undeniable.

The evidence is there, but still, what a bummer. If I’m honest, what I missed most is that feeling 30 minutes or so after the first drink. The feeling of bliss, when problems float away. I was indeed invincible, witty, about to do brilliant things any moment now. Short-lived, unironic self-aggrandisement.

Could that feeling, however brief, whatever the price, be worth it? Part of me still thinks yes. Surely I can reduce drinking and still get to feel that euphoria, that numbing of incessant thoughts, that fading of inhibition.

But after one month the benefits of sobriety outweighed the benefits of alcohol, no matter how hard I tried to spin it. While my husband looks forward to Alcohol August, I am thinking of going another month without booze. I can’t say I won’t drink again – the thought is terrifying – but the ledger leans too far one way to be ignored. Cheers to that. – Guardian

Michael Harding: The faster I read, the more gin I downed
Real news has value SUBSCRIBE