Food’n’health is the new rock’n’roll

‘Nutritious food and fitness are a match made in heaven, and like any great relationship, they bring out each other’s very best qualities’ 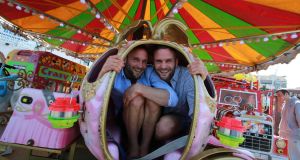 We are all heartily sick of hearing about people who claim to be “social influencers” on the internet. With their free gifts, free trips, goodie bags and Instagram accounts, you might almost imagine that they invented the science of shaping people’s choices. But if you want to know who the real social influencers are, you need to look at the areas of food and health.

Mrs Beeton was the social influencer of her day, just as Elizabeth David, or Monica Sheridan, were in their prime. With their theories of diet and health, John Harvey Kellogg and Dr Atkins were enormously influential.

But something interesting has been happening in Ireland in the past few years, which is bringing about a synthesis of food, and healthfulness.

The process began when Dave and Steve Flynn published The Happy Pear. For a decade, the brothers had been slogging away in Greystones, running a shop and restaurant that focused on plant-based, healthful eating. They made little videos for YouTube, and had a cult following.

Their book changed all that. A friend sharing a house with four 20-something women in Dublin told me that three of the four had their own copy of the book.

The Happy Pear would go to the top of the bestseller lists, and stay there, in the process selling more than 100,000 copies, an almost unimaginable figure in Irish publishing.

When we featured the brothers recently at Electric Picnic, you couldn’t have swung a cat in the Theatre of Food: the place was mobbed. It was rock’n’roll for vegans.

The food and fitness message has become resounding.

“Food is my first passion, but fitness is a close second,” writes Roz Purcell in Thirty Minute Hero. “Plus it goes hand in hand with healthy eating. When you train, you automatically tend to eat better.”

In her book Finn’s World, Finn Ní Fhaoláin spells it out: “Your whole lifestyle – where you live, what you eat, what you do, how you exercise and the people you surround yourself with – has to work together to make a happy, healthy human.”

Just in case you haven’t got the message yet, Rosanna Davison spells it out on her book Eat Yourself Fit: “Nutritious food and fitness are a match made in heaven, and like any great relationship, they bring out each other’s very best qualities.”

The real influencers of how a younger generation are thinking about food and health isn’t the Department of Health’s food pyramid. Instead, it’s Finn Ní Fhaoláin’s recipe for “The Trudeau: banana pancakes with bacon, sweet and hot like Canada’s Prime Minister.”