Why does nobody go to the PE desk at parent-teacher meetings?

All parents want good health for for their children, so why don't they care about school PE? 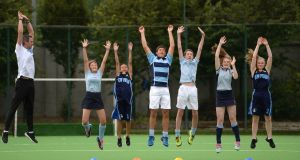 So little time and so many teachers to talk to is a common complaint about teacher-parent meetings at secondary schools. But teachers of one subject are likely to be left twiddling their pen at an empty desk while parents queue for their colleagues.

Few parents, in my experience, prioritise getting a progress report on their child’s physical education (PE), despite its long-lasting importance for health.  After all, what use are irregular Irish verbs when clogged arteries take their toll?

Due to the preoccupation with academic success and “points”, making PE an examinable subject in the Leaving Cert might help to change attitudes. Back in 2011 the National Council for Curriculum and Assessment drew up a draft syllabus where, like music, 50 per cent of marks would be awarded in practical assessment and the other half for written work.

Our fitness-conscious Taoiseach Leo Varadkar, when minister for sport, spoke out in favour of making PE an exam option, so maybe his views will help to breathe new urgency into the matter. Meanwhile, something needs to be done about physical education.

The fact that so many children are overweight and unfit is “clear proof” that the school PE programmes are failing, according to Prof Niall Moyna, head of the School of Health and Human Performance, Centre for Preventive Medicine in DCU.

“If our children were leaving school unable to perform basic mathematics, we would examine the mathematics curriculum without delay,” he wrote earlier this month in this newspaper. “Why, when too many of our children are leaving school overweight, unfit and destined for a life of ill-health, are we not challenging what they are being taught in PE?”

Most parents would say that good health is top of their wishes for their children, but just 6 per cent believe PE is the most important subject taught in schools, according to a national survey by Irish Life Health. More than half of the PE teachers questioned in the same piece of research say the syllabus is “not fit for purpose”.

Eavan Delaney, a PE teacher at the co-educational Newpark School in Blackrock, Co Dublin, wouldn’t go that far but she welcomes the approach of the new Junior Cert syllabus. Pupils will be given a certificate of achievement after being assessed over two years in four strands of PE.

“Not every student can do everything but there is something for everybody,” she says. And bringing PE under the umbrella of “well-being” will also make people more aware of what they can do individually – “they are not being pitted against each other”.

PE classes are most important for the non-sporty children, as keen sports players will be racking up hours of physical activity after school and at weekends no problem. That’s why classes need to engage those who have no interest in traditional sports.

“We’re trying to find something that they can latch on to,” says Delaney who explains that “the hardest battle is senior-cycle girls for the most part, to try and get them to do something”.

At Newpark, senior students can choose from options such as Zumba and yoga, as well as things like badminton, swimming and football.

That’s working out well so far, says fifth-year student Michael Hall (17), because everyone is actually trying activities whereas before “you would get people who stand still at football and just watch”.

It’s important to listen to children, says Prof Craig Williams, director of the Children’s Health and Exercise Research Centre (CHERC) at the University of Exeter, who was in Dublin for the recent launch of the annual Irish Life Health Schools Fitness Challenge.

“Worldwide surveys have shown the three prime reasons why kids want to be active or fit are: 1) to have fun 2) to be with their friends and 3) if they can learn some sort of new skill.”

We know fitter adults in the workplace will be more productive and have a better quality of life but “somehow we have lost that connect” when it comes to children in schools, he suggests.

The guideline on exercise for children is a minimum of 60 minutes of moderate to strenuous physical activity a day. But with 90 per cent of secondary schools providing less than two hours of physical education a week, it can be hard for teenagers to get enough daily exercise.

Even though Newpark does well to give first- and second-year students two 80-minute sessions of PE a week, this is cut in half for Junior Cert students – “so we had more time for Irish”, explains Ava Paul (16), who is now in Transition Year.

Yet research shows that fitter and more active children can cope better with stress, says Williams.

“We know in our adolescents that mental stress and pressures are really high, so if you are fitter and doing a sport or recreational thing you like – besides the biological adaptations, you’re getting socialisation, psychological kudos in terms of self confidence and self efficacy that are often down-played, and it actually helps you take on the pressures of examinations.”

However, being fit and being active are not one and the same. Active children may not be particularly fit and vice versa, says Williams.

“Over the last 20 years fitness per se has been neglected in children’s research because physical activity has tended to dominate. Activity is behavioural while fitness is more biological.”

To improve fitness you have to increase the intensity of the exercise. “Children tend to need a higher intensity than adults,” he says.

Any gym-going adult will know that HIIT, or High Intensity Interval Training, is a buzz word in the fitness industry right now. It’s a term that would mean nothing to children but this combination of short, high intensity bursts of cardio exercise, followed by equal or longer periods of rest, is what most of them do naturally when playing outdoors.

Children’s movement patterns are very much stop, go – have a quick chat with their mates – and go again, says Williams.

“They are like pocket rockets – they are not going to go for three miles at the same speed. So the HIIT-type stuff lends itself naturally to children.”

It is why, having researched the benefits, he advocates the incorporation of HIIT in PE classes.

“We found that this type of thing works to get them fit,” he explains. Children aged 12-15 who participated in three HIIT sessions a week for just a fortnight improved their aerobic fitness. He also believes there are other gains not achieved in steady, continuous exercise, in terms of blood pressure and for vascular health, which they are continuing to investigate.

Worldwide studies that have tracked people into their 50s show that the fitter they were at 18 years of age, the lower their risk of ill health such as heart attacks and strokes.

It is initiatives such as the Irish Life Health Schools Fitness Challenge, in which more than one-quarter of Irish secondary schools participated last year, that give teenagers some idea of their fitness levels. They will see how training over six weeks improves the number of shuttle runs they can perform to recorded bleeps that gradually speed up.

Williams has worked with the Danish educational authorities in revamping its PE curriculum as they look to build more physical activity into the school day. This is being done through more time given to PE classes as well as, in some cases, extending the school day with a sports club.

Williams tells head teachers that wherever schools have increased physical education or activity programmes, not one has seen the academic scores of their pupils drop. About half have seen academic scores improve, while in the rest there has been no change.

So more exercise and less time in the classroom is likely to be a help rather than a hindrance when it comes to State exams – not to mention increase the chances of a healthier life long after the points race has been forgotten.