The effects of alcohol: What’s your poison?

Study suggests that more than 12.5 units of alcohol per week is bad for us, reduces life expectancy and increases the risk of stroke 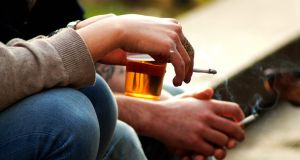 'What would worry me about drinking would be the elevated risk of stroke rather than the higher mortality risk.'

My evening walks take me past a series of pubs with clusters of people standing outside having cigarettes. Many of them look like they’ve been pickled in alcohol and smoked like kippers. In some cases, their voices rasp as though their vocal chords have developed a texture of leather. Behind them lie the dark interiors of the establishments in which they spend their happiest hours.

Thinking about the latest huge research study on the effects of alcohol, I wonder how they are standing up at all.

That study suggests that more than 12.5 units of alcohol per week is bad for us, reduces life expectancy and increases the risk of stroke. I think it is a safe bet that many of those I observe in the evenings manage to get through their allowance in an average night.

It’s a difficult piece of research to ignore as it involved an analysis of research over many years of the experiences of approximately 600,000 people. The study involved collaboration by 120 researchers around the world and is published in the Lancet.

The study essentially found that among drinkers the lowest risk of death from any cause was among those who drank 12.5 units or less per week – in other words drinking didn’t damage their health.

When you get above the 12.5, then the risk of death begins to rise. Each extra 12.5 of units increases the risk of stroke by 14 per cent. It strikes me that if you are a drinker it is very easy to drink more than 12.5 units of alcohol a week.

The units referred to here are the British measure and each unit contains eight grams of alcohol. In Ireland, a pint of beer contains almost 20 grams which is more than two British units. A bottle of wine has 75 grams, more than nine units.

As anyone who has ever tried to work it out has found, knowing how many units you are drinking, can be quite impractical in a bar. Your wine could be any strength and served in any size of glass.

If I wasn’t still conducting my not-drinking experiment what would worry me about drinking would be the elevated risk of stroke rather than the higher mortality risk. I’m going to die anyway and the noonday sun is now (at best) the late afternoon sun. But I really don’t want to have a stroke for which the risk is elevated when you go over the meagre 12.5 units a week.

In terms of mortality, an NHS analysis of the study suggested that men over 40 who drink above the recommended limits lose an average of 1.6 years of life and women 1.3 years.

What credence should be placed on this research? The UK’s National Health Service has a ‘Behind the headlines’ section on its website which analyses studies the media has been getting excited about. They have no qualms about ruining a good story. Recent headlines on the website include: “Don’t lose sleep over reports that one bad night can spark dementia”, and “red-meat-free diet not proven to reduce overall bowel cancer risk”.

In its analysis of the research on alcohol it concludes that, “this was an impressive study that analysed a lot of high-quality data. It offers strong evidence to support recommendations that people drink within relatively low alcohol limits . . .”

It notes that alcohol reduces the risk of heart attack, but asserts that the elevated risk from many other causes of death outweighs this advantage.

About half of all drinkers report that they drink more than the recommended amount of alcohol per week – but people tend to underestimate, or at least under-report, how much they drink.

What all this seems to mean, unfortunately, is that my pickled friends outside the pub are, whether they know it or not and whether they care or not, putting themselves at considerable risk.

And that’s before you even take into account that they are standing outside for the purpose of having a smoke.