My daughter is excluded from the friendship groups in school 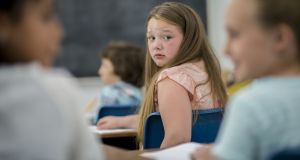 “Things are generally fine during class but much harder at break times.” Photograph: iStock

Question: My 14-year-old daughter is going to an all-girls school and is in second year, but has begun to have problems. She is outgoing, friendly and kind and she works very hard and puts a lot of effort into whatever she does. This seems to have caused issues with one or two of her friends over the last few years and now she finds herself pushed out of her circle. They “accuse” her of working too hard, taking things too seriously etc. We feel there is a certain amount of jealously involved.

Things are generally fine during class but much harder at break times. We are now in a situation that she will spend many lunchtimes on her own. During the break everyone is divided into different groups who do different things and there is a lot of conflict between. It appears that each of the groups have a “leader” girl who dictates what the group will do and my daughter feels uncomfortable/unwelcome.

Unfortunately, her good friend from last year left for another school as her family moved to a different part of Ireland.

We have wondered about going to the school to try and sort things out, but my daughter has asked that we “leave it as you cannot change people”.

I suppose she is right but I don’t want her to be unhappy.

Answer: Finding your niche within social relationships in school is one of the big challenges for children and teenagers. Having one or two good friends and belonging to a supportive friendship group is key to children feeling happy in school, whereas feeling excluded and without friends can be a major stress for them.

Your question highlights the dynamics of friendship groups in school and how they can become a problem for teenagers. When these groups are formed around shared interests, and when they are to some degree open and inclusive, then they can work fine. Indeed such groups are a normal part of the teenage process of working out your identity and where you belong.

However, problems arise when the groups become dominated by one or two leaders or when they become overcompetitive with other groups or centred on “who’s in” and “who’s out”. In these situations, it is easy for bullying to occur and children to feel excluded.

The most important thing you can do as a parent is to be there to support your daughter. Being able to share her feelings and talk to you about what is going on, is very important to breaking isolation and helping her feeling better.

It is important to listen non-judgmentally and to not to rush into solve things for her. (Many children stop telling parents about their problems, for fear the parent will be annoyed or upset or rush in and do things that make things worse). The most important thing is to keep your daughter talking to you so you can support her.

Explore solutions with your daughter

Explore with your daughter different things she can do to make things better. Often the best focus is not on trying to join a group, but instead on trying to make connections with individual girls in the classes. This could include girls in the original friendship group or new girls she hasn’t considered before.

Brainstorm with her different things she could do to reach out to these girls such as starting conversations at the start of class, or on the stairs, or during class projects etc. It could really help to build one-to-one connections outside of the school. For example, are some of the girls who might be potential friends involved in extra curricular activities with your daughter? Or are there other ways you could facilitating this contact outside school?

As you identify in your question, often the biggest challenge is managing the break times, when the girls divide into their different groups which might be led by dominant people in conflict. Explore with your daughter how she can manage these times. There are likely to be other girls in the classes who like herself are outside the groups or perhaps there are activities she could do during the lunch breaks that structure the time such as going to the music room or library etc.

Getting support from the school

Though your daughter is reluctant, it is worth getting support from the school. There are different things that could do to help. For example, perhaps there is a school counsellor who could help your daughter or who might know of other girls she could put her in contact with. Perhaps the year head could help by organising some activities during the breaks (eg reading or music or sports groups) that take away the attention away from the competing social groups and give the children other options.

In addition, they could also provide class room inputs on friendship and inclusion to give the children the skills to resolve relationship issues and to change the culture in the school. Before contacting the school, it is important to get your daughter on board about this and to do it in a way that she feels comfortable with.

When school friends fall out or move on, often the most damaging thing is not the loss of the friend, but how the child interprets this. If a child feels very rejected or blames themselves, or still seeks approval from the friend (even though the friend has moved on), these can all make things worse.

Putting things into perspective helps. It is important to help your daughter understand what happened between her and her original friends without being overblaming of the other girls. (eg that they have different interests now, and it is normal for friendships to move on etc). Helping your daughter expand her friendship network without burning bridges with the original friends is generally the best policy.

– Dr John Sharry is founder of the Parents Plus Charity and an adjunct professor at the UCD School of Psychology. He has published 14 books including Parenting Teenagers: A Guide to Solving Problems, Building Relationships and Creating Harmony in the Family. See solutiontalk.ie

My cancer scare, the marathon and me
8

Eight romantic Irish homes to fall in love with
10

Talk of Halloween is a welcome distraction but how will it work this year?
Real news has value SUBSCRIBE