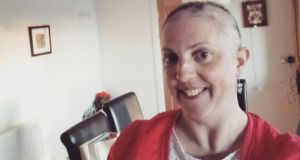 Ann Marie Hoade after treatment for ovarian cancer. There are about 410 cases of the disease and 270 deaths as a result it each year in Ireland.

When Ann Marie Hoade started experiencing frequent urination in 2016, she initially thought she had a kidney infection. And when this progressed to pelvic pain, she still believed it was a minor ailment.

However, when the pain got more intense she was forced to visit her GP, who diagnosed her with cystitis. This, although painful, is a very treatable condition, so it was with great shock that several pain-filled weeks later, she discovered that she had cancer.

“I thought I had a kidney infection while on holidays but during the second week away the pain was so bad that after looking online, I thought I had an ovarian cyst,” says the Galway woman. “When I came home, the pain went away for a couple of weeks but then one morning I woke up and got sick from the level of the pain so I went to my doctor, who diagnosed me with cystitis.”

After a course of antibiotics the pain disappeared only to return a couple of weeks later along with severe bloating. The 42-year-old went back to her doctor, who said it could either be IBS (irritable bowel syndrome) or an ovarian cyst – so sent her away with painkillers and the promise to return for tests if the pain persisted.

However, on the advice of a friend, she returned to the doctor again and asked to be referred for examinations immediately and after a pelvic ultrasound and a CT scan she was told that she had a cyst on each ovary and a few spots on her lungs. Naturally, she began to get worried, particularly when the doctor suggested a hysterectomy.

“This was just before Christmas 2016 and I had samples of my lymph nodes taken in January and a week later got my results saying the samples [on her lungs] were consistent with a condition called sarcoidosis even though I had no symptoms of the illness,” she says. “I was due to have surgery in February and when it was over the doctor said they had found a few suspicious lumps and bumps in my pelvic area and depending on the results I might need further treatment. This was my first inkling that I might have cancer.”

Despite trying to focus on getting over her operation, the microbiologist was convinced her condition was more serious and, to her dismay, a month later she was told that cancer had indeed been found in both of her ovaries and in her stomach area.

“I knew I was going to get bad news as the doctor asked was there anyone with me before I entered the office,” she says. “My mum was in the waiting area but I was trying to be brave and received the news on my own – it was very shocking. I was told I’d have to have six to eight cycles of chemo every three weeks and the next few days were spent in disbelief – I couldn’t get it around my head that I had stage-three ovarian cancer.

“I started chemo two weeks later and finished my treatment altogether in August 2017. I was also tested for the BRCA1 gene, which was positive, and this was more of a shock as there was no family history of it. I am now being monitored for breast cancer but because I have had a hysterectomy my chances of getting breast cancer have gone from 65 per cent to 30 per cent.I’ve been advised to stick with screening for now but to strongly consider a double mastectomy.”

The last couple of years have been very difficult for the Tuam native but she has pulled through and, just nine months after completing treatment, took part (and finished) a 75-mile charity cycle.

“I’m continuing to train to complete a 100-mile cycle in London at the end of July for Tuam Cancer Care who were a great support to me during my diagnosis,” she says. “And I would urge women who have any symptoms, however vague, to get checked out.

“If it wasn’t for my friend encouraging me to get tests, there could be a different story today.”

There are about 410 cases of ovarian cancer and 270 deaths as a result of the disease each year in Ireland and Joan Kelly, cancer support manager with the Irish Cancer Society, explains who is at risk.

“The cause of ovarian cancer is unknown but there are certain risk factors which can increase your chance of getting the disease,” she says. “ It is more common in women who have not had children. As you get older and have gone through the menopause, you are more likely to develop it. Between 5 per cent and 15 per cent of cases are caused by an inherited faulty gene.

“There is a slightly higher risk if you have received hormone replacement therapy [HRT] and received drugs to stimulate the ovary during infertility treatments. Some research suggests that being infertile may be a slight risk but research is ongoing to know for certain.”

Most women will not notice any symptoms as it can take a long time for cancer to occur. When symptoms appear, they can be mild, vague or persistent and can include feeling bloated; persistent swollen abdomen; pain or a dragging sensation in your lower abdomen or side; vague indigestion or nausea; poor appetite and feeling full quickly; changes in your bowel or bladder habits, for example constipation or needing to pass urine urgently; and abnormal vaginal discharge or bleeding (which is rare).

“Even though these symptoms can be caused by complaints other than cancer, it is important to have them checked by your doctor,” says Kelly. “Your GP will examine you first, then do an internal exam and, if they have any concerns, will refer you to a hospital for further tests or to a specialist.

“There are specialist clinics for people worried about the risk of ovarian cancer in their family, some may offer screening or counselling. Your family doctor will advise on what to do and you can always ask for a second opinion.”

Read: Ovarian cancer does have symptoms: here are four to look out for