Walking a fine line on a visit to Skellig Michael 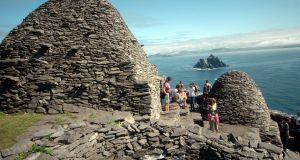 Skellig Michael: Had I been a slow walker, a very pedestrian kind of pedestrian, there’s a good chance I’d still be perched on that summit right now – surreptitiously installed in one of those huts.

I’ve always been a fast walker. A walk is a walk. It is not a dawdle or a mosey or a wander. There are times and places for that kind of thing but for the most part walking is about getting from A to B in the most direct and efficient way possible.

Those with a woolier attitude towards walking fairly jog trying to keep up.

“God, you walk fast,” they’ll pant as I weave my way through the crowds.

But then, it’s in my genes. My mother was a fast walker. She swept through the streets of Navan, children in tow, because there were things to be done - meat to be frowned over, vegetables to be squeezed, immersions to get back in time to put on.

My siblings and I scampered alongside, without thinking anything of it. We hung on gamely to the side of the pram or buggy, glancing upwards at regular intervals for an indication of a sudden change of direction.

It has stood me in good stead. Nowadays, I find myself darting between pedestrians and sighing inwardly, and sometimes not so inwardly, when tourists up ahead stop to take a photo of what – the GPO!

Years ago, I did that very last section of the Camino de Santiago with some friends. We opted for a non-traditional package, however, which meant staying in small, comfortable hotels while our bags were sent on ahead each day.

We tended to come across the same people on the pilgrimage route again and again. A man I’d spoken to before, inquired on day three in a confused kind of way, about the location of my rucksack. He was breathless and perspiring from carrying his own.

I filled him in on our morning collection.

He looked aghast. “But you must suffer,” he exclaimed, genuinely distraught at finding himself confronted by such naked indulgence, “it’s about suffering”.

I begged to differ and bolted ahead.

But it was on Skellig Michael, way before that galaxy from far, far away got in on the act, that those years of brisk, efficient movement really came into their own. Mind you, we got off to a rocky start. It’s always a little disconcerting when your boatman passes around seasick tablets to all and sundry as he pulls away from port.

However, it wasn’t until the boat landed that the penny dropped and I suddenly realised what it was I’d gotten myself into.

I tend to forget that I have no head for heights until something happens to make me remember again. Looking upwards from the pier in Skellig Michael nudged that sliver of self-awareness right back into pole position.

I made it to the summit through keeping my head focused on the tufts of grass at my feet. But then I knew all along that the ascent was going to be the easiest part.

And sure enough, once there a kind of panic set in. Why, oh why, had I come up here in the first place and how in the name of all that was good and wholesome was I going to get back down again?

At some point, the guide, gestured toward the beehive huts. His explanation had clearly come to an end, and an invitation to explore was on the cards.

It was now or never and I made for the path, only to find it colonised by puffins and Italian tourists.

It was obviously rush-hour for the local avian residents who waddled, in any other context adorably, from one side of the path to the other. And it was equally clear that my climbing colleagues from the Mediterranean were obsessed with capturing themselves on film from the full range of perspectives available on Skellig Michael – on the path, half on the path, both on and off the path.

And so the bizarrest of obstacle courses presented itself. I zigged and zagged, weaving between each group with neither realising how close they came to the most definitive of Atlantic experiences.

It was as if my life had been building towards this moment. All that scampering and scurrying through the streets of Navan, for this.

But happily, so very happily, I made it down to the pier and heaved and retched my way back to civilisation.

Glamp up the garden with these yurts and bell tents
4