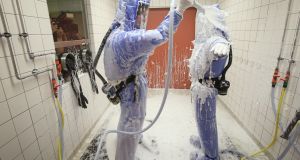 As I sit down to write this column, the death rate associated with the novel coronavirus infection in China remains unclear: an estimated mortality rate of between 2 and 3 per cent is a best “guesstimate”.

That compares favourably with other coronaviruses that have emerged in the last 20 years. The mortality rate for Sars was 9.6 per cent, and for Mers, 34 per cent. Meanwhile, the regular seasonal influenza death rate is a more modest 0.01 per cent.

The fear factor of an unknown new viral epidemic is significant: apart from lethality, people want to know how easily transmitted the new bug is and of course would like to know if it has the potential to become a worldwide pandemic.

We can only imagine what it feels like to be a doctor or nurse working in Wuhan, the epicentre of the outbreak. Packed hospital corridors, a lack of medical resources, anxiety as to whether the personal protective equipment they have been given is up to the task – all on top of working long hours with inadequate meal break – takes its toll.

And yet, history tells us how selfless healthcare professionals are when they face a massive outbreak of infectious disease. The locus of Sars in 2002/2003 was mainly healthcare facilities, and health professionals bore a significant brunt of the infection.

In Toronto, Canada, healthcare workers represented 40 per cent of Sars cases, while in Hong Kong some 25 per cent of cases involved healthcare staff. During the major Ebola outbreak in 1995 in the Democratic Republic of Congo, 65 health workers died out of a total of 244 who were looking after infected patients.

And in the 2014 West Africa Ebola epidemic, healthcare workers experienced high mortality rates: 8 per cent of doctors, nurses and midwives succumbed to Ebola in Liberia while 7 per cent died in Sierra Leone.

While all hospital workers are exposed to some risk of infection, the extent of this risk is not distributed evenly. Some specialities have always been subject to comparatively high risk. In pandemic flu, primary care and emergency department staff, as well as respiratory and infectious diseases teams, critical care staff and anaesthesiologists, are likely to be at higher risk than those in nonacute specialities.

Nurses tend to spend more time in close contact with patients, and those carrying out aerosol-generating bedside procedures may be at increased risk. And we cannot ignore the risk to domestic and cleaning staff, as well as catering team members and porters.

Still, the noble tradition of placing oneself in danger and not abandoning patients lives on. Healthcare workers through the ages have been plagued by infectious diseases. During the eras of greatest risk, the most prevalent and serious infections such as syphilis, hepatitis, HIV, tuberculosis (TB) and influenza have been incurable.

Dispensary doctors in 19th-century Ireland invariably died young. Somerville and Ross memorably referred to atrocious weather as being “fit for only a snipe or a dispensary doctor”.

Between 1843 and 1848, some 443 general practitioners died, the majority succumbing to fever. Typhus killed many. A report by the Royal College of Surgeons at the time noted that dispensary doctors died from “labouring among the poor in wild and thinly populated districts, while the medical man has often to ride or drive for many hours, exposed to cold and wet, suffering from great fatigue and then becoming exposed to concentrated contagion in some of the wretched isolated hovels of the peasantry”.

While modern personal protective equipment has undoubtedly helped today’s healthcare professional, the dearth of comprehensive knowledge about a brand new infection means no one can be sure.

In addition there is no treatment for the novel coronavirus (2019-nCoV), while an effective vaccine is at least six months away.

So health workers who turn up for dangerous work, day after day, merit our respect and gratitude.