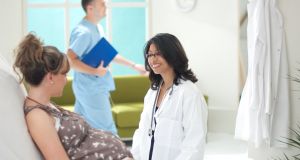 Extra care and attention. In her workshops Hazel Larkin discusses issues of control, power and triggers, along with the challenges that can surface during labour, birth and postpartum. Photograph: iStock

While it may be an innate and mainly joyful event, many pregnant women feel anxious at the thought of going through labour and can suffer emotional and physical distress during the delivery itself. And there is one group of women for whom there is an extra level of trauma associated with the arrival of their unborn child – those who have been victims of sexual assault.

Hazel Larkin is a sexual abuse survivor and over the coming months will be running courses for midwives and health professionals to make them aware of the extra care and attention which is essential to help women such as herself cope with what can be a seismic event in their lives. “I will be running courses for healthcare providers to educate them on the provision of trauma-informed care for women who were sexually abused as children – with the awareness that much of what I’m presenting applies to men also,” says the Dubliner.

“I developed them [the classes] because women who have histories of child sexual abuse have different needs to other women during pregnancy and childbirth – yet the need for trauma informed support is not addressed during their training in Ireland – so I offer it. There are physiological differences [between women who were abused and those who were not] – our labours are inclined to halt at 4cm, for example – as well as needs we have around the language used. I also go through the legal responsibilities of mandatory reporting, as it applies to midwives, doulas, doctors and nurses.

“Women with histories of abuse are already traumatised and birth can be another source of trauma – or it can be a healing and empowering experience. The aim of this workshop is to help birth assistants with their understanding of the trauma associated with child sexual abuse, and to help them to provide sensitive treatment to the women they care for.”

Larkin, who has two daughters – Ishthara and Kashmira – is working on her PhD, which focuses on transgenerational trauma with specific regard to women and child sexual abuse (her other degrees are in psychology and sociology; an MA in sexuality studies, and an LLM in international human rights law). In her workshops, which are accredited with the Irish Nurses and Midwives Organisation for Central European University, she will discuss many issues including the definition of childhood sexual abuse (CSA) and its impact on pregnancy, issues of control, power and triggers along with challenges during labour, birth and postpartum as well as offering solutions for self-care.

“Mainly, I provide workshops [either a half day, or over the course of two days] to midwives, doulas and doctors who work a maternity setting,” she says. “I will also be working with mental health professionals and raising awareness with them around the special needs of those with histories of CSA. I also talk about mandatory reporting to Tusla, and how to balance that with the duty of care to the person and encourage disclosure, while still assuring confidentiality.

“And I deliver lectures to medical students in TCD on the same topic. Incidentally, never one to let a teaching opportunity slide, I even wrote a letter to my own doctors while I was in hospital recently after I had displayed a traumatic reaction to an element of care myself.”

She says the language used towards people who have histories of abuse can have a strong impact and she provides a list of words and phrases that could be be very upsetting. “It is really important to use a woman’s name – and not to call her ‘love’ or some variation of a pet name as abusers seldom use a child’s name when they are abusing them, so this depersonalisation in a medical situation is very much contraindicated,” she says. “Also, making sure to ask permission is key to providing people with a less traumatic version of care. Seek consent by saying ‘may I?’ instead of ‘I’m going to’. Letting someone know that they can halt an examination or a procedure at any time is also crucial to allowing them to know that they are in control of the process and their experiences of it.

“Given that CSA affects approximately one in three women, it’s safe to assume that about a third of the women [giving birth] will have some experience of sexual abuse. This trauma means that they have additional needs during pregnancy, labour, birth and the postpartum period.

“People with histories of child sexual abuse will be carrying trauma as a result, and this trauma can manifest in manifold and complex ways: For example, unresolved trauma is often held in the body – and there are myriad conditions which are more likely to affect people with histories of trauma [including migraines, heart complaints, and more obviously, psycho-sexual difficulties]. Labour can also progress differently in women who have histories of CSA, and it’s important that healthcare professionals are aware of this, so they don’t automatically rush to intervene when no intervention is necessary.”

The CSA survivor says she is the only person in the country offering training of this nature and due to her own unfortunate experience as a victim and having given birth twice, knows only too well its importance.

“In many ways, I am ideally placed to deliver this training as I have a relevant academic background, I was the first practising doula in Ireland in 2005, and I brought doula training to Ireland for the first time later that year,” she says. “Perhaps most relevant, however, is my own personal experience. As a woman who was sexually abused during my childhood, I am aware of how that impacted on my own experiences of pregnancy and childbirth – including how I empowered myself to take as much control as I could of my miscarriages.

“My children were born in 2002 and 2004, respectively. At that time, I hadn’t embarked on my own academic journey and I believed in what was then the dominant, accepted narrative that we need to ‘just get over’ our negative childhood experiences.

“When I was pregnant, I very hesitantly revealed that I had been abused and the reaction [from healthcare professionals] was nothing. My disclosure wasn’t even acknowledged, never mind given any understanding. So I was immediately embarrassed, and ashamed to have spoken. My history was not factored into my care and this impacted very negatively on me – particularly during events which unfolded around the birth of my younger daughter – which resulted in me having PTSD-related to the trauma of her birth, on top of the PTSD I was suffering going into the pregnancy. I didn’t have the support I needed afterwards, and even when I went looking for counselling, I couldn’t find anyone who was equipped to help me deal with what I was going through. So I dearly want to ensure that the passage to motherhood for every other woman is as easy, and as empowering, as it can be.”

This year is already looking busy for Hazel who will be delivering training in Dublin in February, Portlaoise in March and Galway in April.

“I’m delighted that my trainings are recognised by the INMO for CEU [formerly CPD] units and, also in March, I’ve been invited by Trinity Obstetrics and Gynaecology Student Society to speak as part of a panel on the topic of sexual abuse,” she says. “I’ll be speaking at UCD on the evening of February 4th, as well, as part of a seminar series being launched by Dr Ailise Bulfin on cultural representations of survivors of child sexual abuse.”