Taking the squeeze out of blood pressure treatment 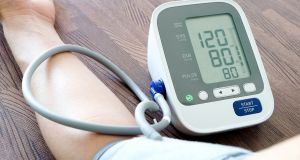 Doctors here are far more likely to follow European guidelines, which means a BP threshold of 130/90 has almost certainly been applied to you. Photograph: iStock

Blood pressure was easier to explain when I started practising medicine. For years, the magic number was 140/90 and you could usually expect a nod of agreement when you mentioned this during a consultation. But now an element of confusion has crept in, with patients not quite sure what they should be aiming for.

Which is understandable in the context of more detailed research into hypertension. Another factor has been an explosion in treatment guidelines from the United States and Europe, which do not always agree.

At present, US guidelines are a little more aggressive. For the top blood pressure number (systolic) both parts of the world recommend that blood pressure be treated to keep this number at 130mmHg or lower. But for the number under the line (diastolic blood pressure), US experts suggest the number should be 80mmHg or less. In Europe, the guideline remains at 90mmHg for this measurement. So 130/80 is the treatment aim in the US, while 130/90 will keep doctors on this side of the Atlantic happy. High blood pressure can be diagnosed when either the systolic or diastolic (or in some cases both) numbers are above the respective guideline value.

An elegant piece of research, just published in the Journal of the American Medical Association, suggests we take a critical look at the US guideline. Bill McEvoy, professor of preventive cardiology at NUI Galway and medical director of the National Institute for Prevention and Cardiovascular Health, working with colleagues from the Johns Hopkins and Baylor Colleges of Medicine in the US, looked at cases of isolated diastolic hypertension (IDH), as defined by US guidelines. The primary analysis was conducted using the Atherosclerosis Risk in Communities study cohort, which includes 8,703 adults followed up for 25 years and which gives information on the risk for ischaemic heart disease, heart failure and chronic kidney disease.

Their results suggest that increasing blood pressure treatment may not benefit adults with IDH. They discovered that there was no increase in risk for adverse health outcomes among adults with a diastolic blood pressure over 80mmHg.

“Some individuals have increased diastolic pressure, and this is much more common now with the new guideline threshold of 80mmHg. We estimate that 100,000 adults in Ireland could now be classed as having isolated diastolic hypertension,(if the US guidelines were followed here) and as the guidelines do not distinguish between different types of hypertension, they could be labelled and treated inappropriately.”

He points out that the original lowering of the diastolic threshold from 90 to 80 was based on expert opinion and not on solid research evidence. His data suggest there is no harm of having a diastolic BP over 80mmHg.

So the research provides a solid argument against overtreatment, which is always welcome. In an Irish context, it means up to 150,000 people would avoid unnecessary blood pressure treatment. It makes a lot more sense to instead focus on healthy diet and lifestyle.

What it doesn’t mean, if you are one of the 600,000 or so people in Ireland with established high blood pressure, is a need to rush to see your family doctor or cardiologist in the coming days in case your diastolic blood pressure is being overtreated.

Doctors here are far more likely to follow European guidelines, which means a BP threshold of 130/90 has almost certainly been applied to you.