The joy of gymnastics: children with disabilities join the club

GymAble makes gymnastics accessible to all children and boosts their confidence 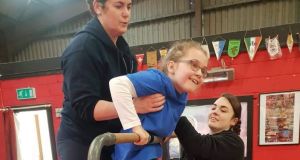 Imagine being a parent who has to tell their child they can’t have their childhood dream of being a gymnast because of disability. Now imagine the excitement of being able to tell your child that a new programme can make their gymnastic dreams a reality.

That’s how it was for Cork mother Susan Beecher when she was able to tell her 10-year-old daughter, Scarlett, who has cerebral palsy, that gymnastics was finally a possibility thanks to Gymnastics Ireland’s GymAble programme, which promotes gymnastics inclusivity among those with physical and intellectual disabilities.

“It was a daily occurrence telling Scarlett she couldn’t do this or that, which can be very upsetting, so when we heard Cork Acro was going to run a GymAble programme, we decided we’d move whatever we had to move to get her to a class.”

The results for Scarlett and her family have been phenomenal. “Scarlett had major surgery two years ago to help get her where she is now. She wasn’t a walker; she never crawled. After the surgery we went to GymAble and I remember the first day she crawled across the floor. It was heartbreaking. She’ll do the beam now. It’s a lot of hard work, but she’s with a group of other children with physical disabilities and they encourage each other and now she’s walking with a walking aid. Our children can achieve just like able-bodied children, it’s just going to take longer. I heard one child say about the class, ‘It’s like physio, but it’s fun.’ ”

Part of a club

Cork Acro has been at the forefront of Gymnastics Ireland inclusivity programme, which has been running since 2017 and is due to have its first club disability forum in Dublin on December 8th, where Paralympic swimmer Ellen Keane will be guest speaker. Cork Acro now runs classes for children with physical disabilities and intellectual or sensory challenges.

Wexford Gym Club has also been involved in GymAble - along with co-funders, Sports Active Wexford and the HSE - since the beginning. “Our club has always been inclusive in that we always ran classes that included people with mental and physical disabilities, but they’d be in an ordinary class. Our new class was different in that it was specifically for kids who were on the ADHD/autism spectrum, and we worked very closely with speech-and-language and occupational therapists. They gave us their goals for children and I’d my own gymnastic goals,” says coach Terri Doyle.

“I did a lot of research but only came across one other club in Australia that had run gymnastics for kids with ADHD. There were significant improvements in our young gymnasts. Having gone through GymAble, I’d say about 60 per cent could now move into mainstream classes if they wanted to,” Doyle adds.

HSE senior occupational therapist Helen Corrigan developed the initial programme. “The sensory benefit to children, you couldn’t get it from anything else,” she says. The hope is this idea will spread and that other children with ADHD will benefit,” says Ms Corrigan, who is compiling academic research on the subject.

Wexford Gym Club’s pilot project has been so successful that a club in Donegal has since copied its programme, and Doyle is now taking the GymAble programme and working with adults who have physical and intellectual disabilities.

Gymnastics Ireland participation manager Aimi Baker says, “2019 was the year GymAble really took off with clubs. The first year, five out of 86 Irish clubs became involved and this year it is 17, but even more clubs are engaging about how to develop programmes. Initially clubs might have been a bit nervous about running a programme, so we continued with more training and more sharing of information, which is ongoing,” she says. Gymnastics Ireland’s first disability forum this December will bring together coaches and experts who will be speaking on a range of topics, from autism to deafness to mental health. Wexford Gym Club will also be presenting research on their pilot ADHD programme.

Beecher hopes more families like hers will soon get to experience gymnastics at club level. “Mondays are the highlight of our week; we wait for them to roll around. I’m so grateful, every week I thank the coaches. I don’t think they realise what they’ve done for our family; it still makes me cry that Scarlett can do something normal. As well as helping our children the class is also a great support network for parents. I can understand how some clubs might initially be nervous, but all I ask is that they do what they can do to show our kids that they belong.”

Ross O’Carroll-Kelly: ‘We could be in DeVille’s among people who get where we’re coming from. Literally the Vico Road’
9