Taking an extra 4,000 steps a day may reduce risk of early death 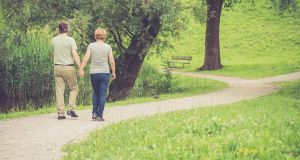 Keep moving – but within the 2km restrictions

Taking an extra 4,000 steps a day might reduce our risk of dying prematurely, even if those steps are not swift, according to a large-scale new study of moving and mortality. At a time when so many of us are confined to home and worried about whether we are being active enough, the study is especially inspiring in that the added steps do not have to come from running or other vigorous exercise. It finds that for every additional 4,000 steps someone takes in a day, even if it’s just ambling around the block or across the room, his or her risk of dying early from heart disease, cancer or any other cause drops by 50 per cent or more.

Stay-at-home restrictions in response to the coronavirus pandemic are being experienced by many millions worldwide. In this situation, questions about how much and how best to exercise or move about for our health and well-being are pressing. In Ireland, people are allowed leave their homes once a day for brief exercise – without straying more than 2km.

Typically, the built-in apps on our phones and activity monitors or watches prompt us to accumulate at least 10,000 steps a day. But there are no reliable studies supporting the 10,000-step target, and some recent evidence suggests that the number sprang from a 1960s-era Japanese publicity campaign promoting pedometers with a name that translates as “10,000 steps”.

More recently, studies aiming to pin down the links between step counts and longevity have tended to be small, based on people’s memories of their activities or focused on specific groups of people, such as older women, or those with diabetes and other health problems. Because of these limitations, the issue of how many steps are desirable and sufficient for most people remains open, whatever your phone may tell you.

For the new study, which was published in March in JAMA, researchers from the National Institutes of Health and the Centers for Disease Control and Prevention decided to look at health and activity data from a large cross-section of Americans. To accomplish this, they turned to records from the massive National Health and Nutrition Examination Survey, which includes responses from tens of thousands of Americans about their lives and health. Many of these participants also wore activity monitors for a week or so, which objectively tracked their movements. The researchers pulled data for almost 5,000 of the men and women who had worn one of the monitors. All were middle-aged or older.

The scientists noted how many daily steps the men and women averaged, as well as how many steps per minute they accumulated. Both measures are telling. Total step counts reveal how much people are moving, in any fashion, while steps per minute indicate the intensity of those movements. Running results in far more steps per minute than strolling, for instance.

They then grouped people by activity, using 4,000-step increments (since that number allowed the most meaningful comparisons), checked the national death registry for participants who had died during the past decade and, finally, compared peoples’ movement patterns and mortality.

The results were interesting and somewhat surprising, says Charles Matthews, a senior investigator in the National Cancer Institute’s Division of Cancer Epidemiology and Genetics. The researchers had expected both the number and intensity of steps to be linked to longevity, he says. But after controlling for gender, age, smoking, body mass index, diet and multiple other factors, only step counts were linked to mortality risk. Step intensity was not.

More specifically, people who averaged about 8,000 steps a day were about half as likely to have died from heart disease, cancer or any other cause as people accumulating 4,000 steps or fewer, while men and women completing at least 12,000 daily steps were 65 per cent less likely to have died than those in the 4,000-or-less group.

But the researchers found no significant associations between the speed of people’s steps and mortality. “We didn’t see any extra benefit from intensity,” Matthews says.

This study was observational, though, looking at people’s lives at only one moment. So, it cannot tell us whether taking more steps caused people to live longer, only that the two were associated with each other. The activity monitors also did not track sports such as cycling or swimming that do not involve steps.

Still, the message of the data seems clear. Try to move, Matthews says, in some way, throughout the day, even if slowly or in snatches, and whether or not you can formally exercise. Use your phone or smartwatch to give you a sense of how many steps you are taking, and, should that total be low, especially if it is below 4,000 a day, consider walking around the block, if local regulations and your inclinations allow, or circuit your livingroom a time or two. – The New York Times

Riyadh Khalaf: ‘Homophobia begins from a lack of education’
3