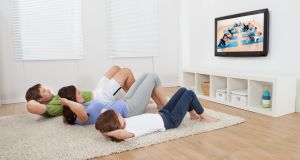 I think my thighs might possibly be broken after taking part in The Body Coach’s home workout. Photograph: iStock

Day #268 in the Big Mother household and I can’t move. In an effort to keep spirits high and encourage as many of the kids as possible to get active in our livingroom, I decided to join in “PE with Joe Wicks”, also known as the The Body Coach.

At 9am on yet another groundhog day, we switched on the livestream. Pyjama-clad minions loitered the sittingroom, with the competitive one ready and determined to beat Mum at every hop, skip and jump along the way. “It’s for kids,” I said to myself. “How hard can it be,” I inwardly chuckled.

That was the last chuckling I did.

Oh how they laughed and oh how spirits soared as they watched their mammy collapse in a heap during push-up attempts, and gasp for breath during pitiful Spiderman lunges.

And oh how they bounced and gracefully bent alongside me, convinced that some of my woeful efforts to keep up were just an attempt to make them laugh. Mortified, I wasn’t keen to correct them.

I think my thighs might possibly be broken so I’ve taken to summonsing the troops from the couch to get things for me, as the effort to stand up is just too painful.

Broken thighs aside, it was nice to hear laughter echoing through our house. There’s been much tears, tantrums and arguing on all sides as we adjust to our current norm. As a parent, the pressure to keep everything running smoothly while trying to abate their fears at the same time has felt more than a little overwhelming.

It came to a head, for me, when Taoiseach Leo Varadkar announced the new restrictions. We were already keeping away from everyone outside our own family unit, and we’d stayed local for daily walks with micro-dog – shaking it up a bit every now and down, by turning left instead of right when we walked out the front gate – so nothing in effect was going to change for us. Nonetheless I burst into tears in the sanctity of my car, at the enormity of what it was all for.

And then, like we have to, I patted myself down, and got on with it. One of the children noticing a tear-streaked face asked if I was okay. “Ah I’m grand,” I lied, “I just hit my funny bone off the doorframe”.

Keeping the spirits up has been essential, not only for them, but for me too through this all. They’re not the only ones who are spending far too much time on screens. I’ve barely let my phone out of my hand, for fear I’ll miss something. I scroll continuously looking for positive news and end up absorbing the negative along the way. It’s playing havoc with my sleep.

I’ve also come to realise that the news needs to be off when the younger children are around.

“I don’t think the coronavirus is just like a cold,” Child 6 mumbled uncertainly, shattering my illusion that he was oblivious to all that was going on around him. “Why are so many people dying?” He hadn’t questioned the situation before, accepting his teacher’s simple explanation that we were just doing this to keep our grannies and grandads safe.

“Every day seems the same,” Child 3 said as we made lunch one afternoon. “I think I’d prefer to be in school.” Bearing in mind he’s a teenager, I appreciated the enormity of his statement. “Well I even miss doing playdates,” I replied in solidarity.

Child 1 is in denial about how long it might all go on. I’ve taken to not arguing with her about it anymore. We all have to cope with this in our own way – digestible chunks, as they say.

It’s the little things that are keeping us going as we take it day by day. Fun and competitiveness in family board games have reached a new level, where the youngest two are on the constant watchout for any slack being cut to them. They want to win on merit, even the one who can’t yet read. And though we’ve never spent quite so much time all together, they still prefer when Mum and Dad join in with the distractions, whatever they may be. In it together has never rung so true.

“We will prevail,” our politicians have assured us, though we may be bruised and battered. I know they’re right. “Every day we’re one day closer to the end,” I tell my children when they ask if I have any clue when we can get back to normal. In the meantime, it’s head down and get through the days with some laughter along the way, even if it is at the expense of mum’s thighs.