Running: simple, convenient and good for the mind and body 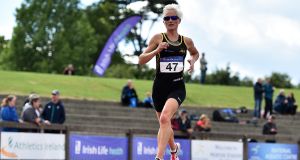 Everyone knows that the more we move, the better it is for our health – both mental and physical.

We know running is beneficial to people of all ages and there are currently more than 300,000 adults in Ireland who run regularly.

Gary Ryan, a former Olympian and now project manager at UL Beo (University of Limerick’s initiative in the areas of physical activity, health, lifestyle and sport) says being active is the single most important thing we can do to improve our overall health. “Exercise is the ultimate health pill with numerous studies finding it leads to better heart health, reduced risk of cancer, lower risk of diabetes and better mental health,” he says.

“Running is especially beneficial, with a recent review suggesting that runners have a 25 per cent to 40 per cent reduced risk of premature mortality. Through its simplicity, convenience and accessibility, running is an activity that can be continued throughout life. It is an especially good form of exercise for those who are time poor to get the necessary levels of intensity of physical activity required.”

Last week, Irish Life was announced as an official partner to Athletics Ireland, an organisation which reaches 100,000 people daily, aged eight to 80.

Hanging up the spikes

Ann Marie McGlynn’s younger years were dominated by running until she decided to give it all up because she didn’t feel she was dedicated enough. “I ran at underage from when I was 13 up to 18, competing at county, provincial, national and international level,” she says. “At underage, I competed for Tullamore Harriers right up to when I received a scholarship to UCD, where I then had to change club under contract.

“I then continued to compete well in the under 20s and under 23s, both at European and world level, but at 23, I decided to hang up my spikes as I felt I wasn’t fully committed and I’m an all or nothing sort of person.”

But while McGlynn, who is married to Trevor and has two children, Lexie (8) and Alfie (6), continued to stay fit, she soon realised that running was crucial for her physical and mental health. “In 2010, after I had Lexie, I stayed reasonably fit playing other sports for fun and then I had Alfie in 2012,” she says. “Unfortunately when he was just three weeks old he developed a bad strain of bronchiolitis and his lung collapsed. He was rushed to the Royal Victoria in Belfast where he was incubated and we were told to prepare for the worst. He was baptised in hospital, we were only allowed to watch from the distance.

“It was heartbreaking and the next week was really touch and go. I never experienced pain like it and felt I was being pulled into a dark hole. But I knew this wasn’t right and had to do something about it. So I got my trainers on and took myself out for a walk/jog as I knew running always helped me clear my head. This decision really was a godsend as being back out running made me realise how much I missed it. Thankfully, Alfie pulled through against all odds and I stuck at the running. So as I got fitter, Alfie got stronger and the rest is history.”

McGlynn who works as a registered childminder realised that she was happiest when she was running and decided to continue her passion in earnest. And since that fateful experience in 2012, both she and her son have gone from strength to strength.

“Once I started back running, I decided to sit down and write out some goals for the next year,” she recalls. “As the All-Ireland indoor championships were taking place on Alfie’s first birthday it gave me nine months to aim towards it and I finished second in the 3,000m. It was such an emotional day for me and having Alfie at the finish line was the icing on the cake.

“Since 2012 I have exceeded what I thought I could ever achieve especially coming back to the sport at 32 - but it just shows that age is just a number. I have competed at the European cross country championships three times and in 2014 I captained the team to a bronze medal. I have also competed at the European team track championships and last year, at the Commonwealth half marathon championships, I finished ninth. I am now in a training phase for debuting in the marathon in early spring.

“Alfie is doing amazing now and to look at him you would never think he was ever sick. He is into all sports; athletics, Gaelic and soccer - he definitely has the sporting blood in his body.

“I would highly recommend running at any level for both physical and mental health. It gives you time to get lost in your own thoughts and helps to clear your head. You don’t have to run fast to make an impact. Starting off with 15 minutes of a brisk walk or five minutes of running is all it takes to reap the benefits of the most accessible sport.”

Dr Tom Comyns, lecturer in Human Movement Science at the University of Limerick agrees and says parents should instil a love of sport into children from a young age. “We need to provide young children with the best possible start so they can lead a healthy and active life,” he says.

“Numerous research studies have pointed to the fact that there is a strong positive relationship between fundamental movement skill competence and physical activity in children and adolescents. This is most likely due to the abilities and confidence that children gain from the early development of those skills.”

My daughter is excluded from the friendship groups in school
8