7 tips to improve your sprinting 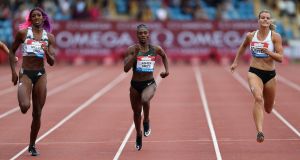 British sprinter Dina Asher-Smith – who clocked 10.85 seconds in winning gold at the European Championships in 2018 – is able to harness the necessary strength and power by mixing track training with gym workouts. Photograph: Getty Images

Sprinting is very high impact – when elite athletes hit maximum speed in a 100 metres race, their feet will strike the ground with a force equal to more than three times their body weight. Dina Asher-Smith – who clocked 10.85 second in winning gold at the European Championships in 2018 – is able to harness the necessary strength and power by mixing track training with gym workouts. Her sessions include weights, squats and core work to condition and strengthen muscles.

2) Focus on your form

A huge part of sprinting is about moving your arms as well as your feet. As four-time Olympic sprint champion Michael Johnson puts it: “Think of your arms as your accelerators. Your arms drive your legs, not the other way round.” That means driving arms back as well as forwards for momentum (trying not to let arms swing out to the sides), while keeping shoulders and arms relaxed. Bring knees up high and try to keep your core controlled with a good upright posture.

Plyometrics are explosive and intense exercises, such as jumping and skipping, that aim to boost muscle power. They can be beneficial to improving running economy and form. Running coach Nick Anderson says: “Your legs become quicker at landing and pushing off the ground, making you faster and more efficient.” He recommends jumping lunges, toe taps, high skips, bench jumps and calf drives, but not more than twice a week and never after running – it’s best to start with rested legs and to build up the duration and intensity.

“Sprinting is all about explosive power; making sure you have symmetry in strength is key,” says physiotherapist Laura Jamieson. A simple way to test this is by comparing the strength and distance of a single hop on your right leg with that of your left leg. Exercises such as single leg deadlifts and lunges can help even them out.

It may seem counterintuitive for a explosive, powerful movement such as sprinting, but learning to stay relaxed is key. “The more relaxed you are, the smoother and faster you’ll run,” Usain Bolt once said. “Your muscles get tight when you tense up.” Focus on relaxing your shoulders and not clenching your hands when you run. Johnson had a nifty trick for this: he would rest his thumb gently on his forefinger, which he said gave him the right amount of relaxation and focus.

6) Give hill sprints a go

Dreaded by sprinters and endurance runners alike, hill sprints do come in useful.“Running uphill simulates the forward lean of the acceleration phase at the start of a race,” explains personal trainer and sprint coach Geoff Walcott. “Running downhill simulates overspeed running, but the gradient shouldn’t be too steep, for safety reasons.”

7) Work on your coordination and balance

Coordination and balance are fundamental not only to sprinting, but good running form in general. Walcott encourages exercises such as skipping and using speed ladders to get the feet and body moving faster, which will increase agility and speed. – Guardian